Share All sharing options for: Hoops Preview: Clemson at Duke/Gamethread

Well, that trip to Atlanta was a big pile of poo and now the momentum of the four game ACC win streak has been sapped.  I'm not sure what to say about this helter skelter team other than predicting success usually leads to defeat and thinking the team has no shot has mostly led to success, so with that in mind...

Meet The Devils: Simply the second most talented basketball team in America behind the Kentucky Wildcats.  They feature the future #1 NBA draft pick in Okafor and give you the usual explosive offense we are accustomed to seeing in Durham.  They average over 80 a game and have four guys averaging double figures.  They have a Plumlee brother left who barely gets to play.  They shoot it nearly 40% from 3 point range as a team.  This team is better than last year's Duke team for sure.  They have the rat on the sidelines and the hordes of dorks from all over the world in the crowd... 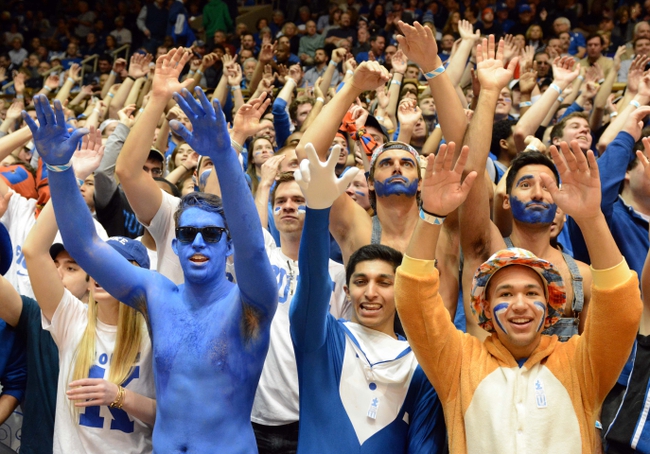 Meanwhile, Clemson can't shoot or score consistently at all.  Landry Nnoko averages a foul per breath taken, Rod Hall is hurt, Damarcus Harrison is the only guard who can swish a 3 and then put a hole in the backboard with the next attempt, Jordan Roper is too short, and Sidy Djitte has no hands.

Clemson has NO SHOT.  None.  Zero.  Who cares what KenPom says? (8% chance).  The program should save on the travel money and stay home.

There, hopefully that is enough negative vibrations to inexplicably lead to the best performance of the season for the Tigers, who in reality will need that and maybe more to pull off a monumental victory in Durham.  If there is a bright side, superstud center Jahlil Okafor is listed as "questionable" for the game after hurting an ankle against the Tarholes (even though he played on it the entire second half and O.T.).  I didn't think Clemson had any shot at the Devils last year and the team worked them over in Littlejohn.  I thought the team couldn't match that playing the Dookies a second time in the ACC tourney but they were a blown no-call away from winning that one too.  I just can't figure this team out at all on offense, but the defense has been very good the last month and slowed down the equally potent Notre Dame attack.  However, that was a home game, so we will see how it goes Saturday.

I will close by saying it has been nice to see Austin Ajukwa show up here recently.  This is about the point last year when he came on to help the cause.  Maybe next season Brad needs to just tell Austin it is February in November so we can get a full season out of him.