Looking to recover from the season-opening loss to UGA, the No. 23 Clemson Tigers kick off against S.C. State at 12:30 p.m. Saturday.

Clemson welcomes FCS opponent South Carolina State to Memorial Stadium on Saturday afternoon. It will be the third all-time meeting between the teams, with the most recent being last season's 52-13 Clemson victory. The Tigers' home opener will kick off at 12:30 p.m. ET, but if you can't make it to Death Valley to watch the game in person, here's how to follow along:

TV: The game will air at 12:30 p.m. on regional ACC Network affiliates--the channel guide for your respective market can be found here. An ACC Network pregame show will also begin at noon.

Streaming: Outside of the ACC Network coverage, the game can be found online at ESPN3 for everyone else. Because of the television broadcast, many Clemson fans will find a blackout when they head to ESPN3. To avoid any gameday frustration, it would be helpful to consult the blackout map while making any viewing plans for Saturday. 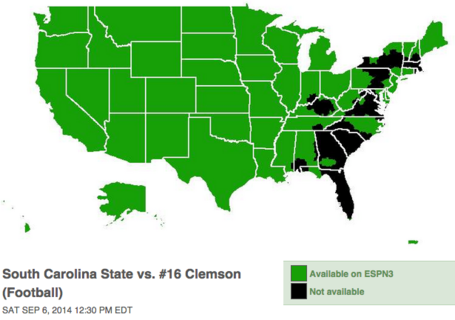 Radio: Clemson football's radio affiliates for the 2014 football season will have the broadcast for Clemson fans unable to reach a TV or other streaming device. Depending on your satellite radio provider, you can also find the game on either Sirius 136 or XM 193.

Other games to watch

Following the 12:30 game, Clemson fans will have the rest of the day to enjoy football. Though this week's schedule has a large share of bad games, there are still a few interesting games on the schedule to keep an eye on--most notably the top-10 showdown between Oregon and Michigan State in Eugene.