Historical Eye of the Tiger: Clemson vs. South Carolina State

A look back at the brief football history between Clemson and South Carolina State, as well as an overview of Clemson's all-time record against all FCS (Division 1-AA) programs in the Palmetto State.

Share All sharing options for: Historical Eye of the Tiger: Clemson vs. South Carolina State

On the heels of a disappointing loss to the Georgia Bulldogs, thanks in large part to a disastrous fourth quarter in Athens, the Tigers get a chance to lick their wounds and exact some revenge on another set of bulldogs this week when South Carolina State travels up from Orangeburg to collect its check in Death Valley. Coach Oliver "Buddy" Pough has been roaming the sidelines for his alma mater (‘75) since 2002, and has compiled an overall record of 98-43-0  at the FCS (Division 1-AA) level, claiming five of the program's seventeen total Mid-Eastern Athletic Conference (MEAC) championships.* The program boasts four Black College National Championships (1976, 1977, 1981, 2009), the last coming with Pough at the helm, but has never won the FCS national championship. South Carolina State has only two wins (2-22 overall record) versus FBS (Division 1-A) competition, both coming recently against Georgia State University (2011, 2012). The Bulldogs are 0-3 all-time versus ACC competition, including two losses to Clemson (2008, 2013), with the other defeat coming at the hands of Paul Johnson's Georgia Tech Yellow Jackets in 2010.

Those two meetings between Clemson and SC State in 2008 and 2013 are somewhat surprisingly the only ones between the two in-state programs. The Bulldogs have not fared well in either meeting, losing 54-0 against a Tommy Bowden-Rob Spence-Vic Koening-directed Tiger team in '08, and falling last year to Dabo & Company 52-13. Pough and his boys have gone on to have very good seasons both times they've tangled with the Tigers, however. They went 10-3 and won the MEAC before losing to Appalachian State in the first round of the FCS playoffs in 2008. The 2013 team finished 9-4 and again won the MEAC before losing to Furman in the first round of the playoffs. Ironically, the 2014 Bulldogs of SC State are coming off a 63-0 drubbing of the Benedict College (SC) Tigers, so both Clemson and SC State will take on the same mascot, only in different colors, this weekend. But before they do, let's take a look back at both games in the short series.

No Clemson fan need be reminded of the debacle-that-was the 2008 season. The Tigers entered the year ranked #9 in the country but were absolutely embarrassed 34-10 by Alabama in a game that wasn't even that close. Tommy Bowden, a perpetual source of heartaches and headaches for Tiger fans from about 2002 forward, had very little good will left in the queue by '08, especially when rumors of his post-game phone call to Nick Saban surfaced on message boards throughout Tiger Nation. [Clemson coach calls on Saban; College Football Coaches to Tommy Bowden: Cry Me A River] Lackluster wins over The Citadel and NC State in weeks two and three did little to assuage the growing discontent among the Tiger faithful. Neither did the first ever meeting with South Carolina State that followed. The Tigers started slow, managing only a single touchdown in the opening quarter, but tacked on twenty-three points in the second to take a 30-0 lead into the break. They added another twenty-four points in the second half, including an interception return for a score by Chris Clemons, which highlighted the defensive shutout. 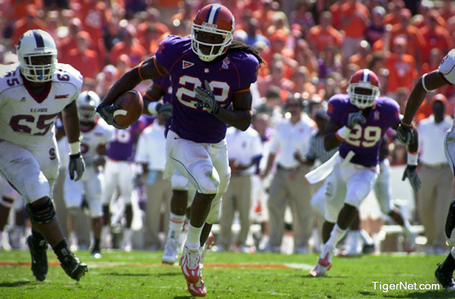 Two touchdowns (one rushing, one passing) came via much-heralded redshirt freshman QB Willy Korn, who went 7/7 for 76 yds and another 19 yds on the ground in extended second-half action. 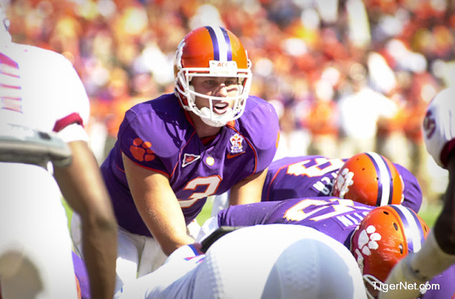 Starting QB Cullen Harper, however, was a frustratingly inefficient 15/24 for 151 yds, 0 tds, 2 ints, also rushing for a score; a stat line that figures as a microcosm of his much-anticipated and woefully disappointing 2008 campaign. 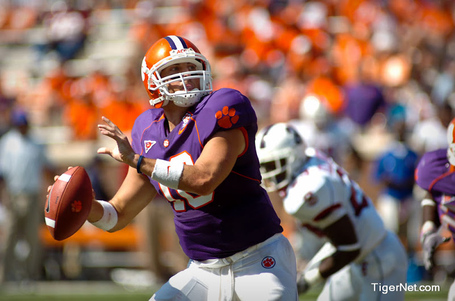 James Davis paced the Tiger rushing attack with 95 yds on 11 carries for 3 tds, while CJ Spiller added 63 yds on 14 carries. 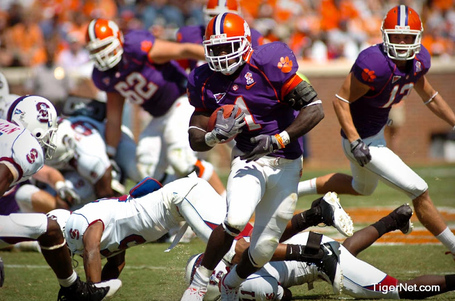 In typical Rob Spence fashion, the Tigers overwhelmed a vastly inferior opponent on the scoreboard and the stat sheet in uninspiring fashion, racking up 54 points and 416 total yards (227 passing, 189 rushing) but showing very little to give fans hope that their Tigers wouldn't fall apart against stiffer competition. Those fears would be realized in the next two weeks, as Clemson lost 20-17 in the Valley to a mediocre Maryland team before the fateful night in Winston Salem the following week when Tommy Bowden lost 12-7 to Wake Forest and subsequently forfeited his job. Under interim head coach Dabo Swinney, the Tigers rallied the troops for a 4-2 regular season finish, including the last win over the Shamecocks, before dropping the Gator Bowl 26-21 to Ndamukong Suh and the Nebraska Cornhuskers and ending the season unranked at 7-6.

In 2013 the Tigers entered the rematch with SC State under much different circumstance. Under fifth-year head coach Dabo Swinney, the Tigers had put together back-to-back double-digit-win seasons for the first time since 1989-1990. Having won an ACC Title in 2011 and set a plethora of offensive records in three seasons under offensive coordinator Chad Morris, returning senior QB Tajh Boyd and All-America wideout Sammy Watkins headlined a star-studded offense that was looking to continue its recent success. The defense, meanwhile, under second-year defensive coordinator Brent Venables, stood to be much improved, especially in the front seven, but faced question marks in the backend. Both sides of the ball proved up to the task, as the Tigers opened the 2013 season with a thrilling 38-35 victory over the Georgia Bulldogs in front of a raucous crowd and a captivated national TV audience. Clemson's star was on the rise in the polls and the national psyche, looking to keep the momentum going and avoid a letdown in the home opener against the SC State Bulldogs before a Thursday night road bout with NC State to open the conference schedule the following week. However, the Tiger offense looked out or rhythm early, settling for a field goal and a one-yard touchdown run by Boyd to jump out to a 10-0. Two interception returns for touchdowns, the first by CB Martin Jenkins and the second by CB Darius Robinson, provided all the momentum need to turn this one into a rout. The Tigers went on to score 35 more points, with the only hiccups being two long touchdown passes by the Bulldogs against busted coverage. Backup QB Cole Stoudt had himself a day, finishing 19/20 for 143 yds and 3 tds, and the Tigers racked up 512 total yards (329 passing, 183 rushing) on offense, while allowing just 249 total yards to the Bulldogs defensively. Clemson would go on to an 11-2 season-the first back-to-back eleven-win seasons in program history-capped off with a win over the Ohio State Buckeyes to claim the Discover Orange Bowl Championship, the program's first BCS bowl victory.

The 2014 edition of Clemson-SC State should hold true to the prevailing historical trends, outliers notwithstanding, and the Tigers will hopefully prevail by more than the average 25-6 score. Though the game itself should be a laugher by half, it will be good to be back in Death Valley with the Clemson Family for the first of just seven home bouts this season. Everyone be loud, be proud, and lets get the home slate started off right (so that it can end right!) and the Tigers can reassert their dominance of the Palmetto State on the gridiron.**

**Clemson also has the following dominant records against other in-state programs not in the FCS: vs. FBS University of South Carolina (65-42-4); vs. Division II Newberry College (6-0-0).