Historical Eye of the Tiger: Clemson-FSU

A sobering yet celebratory look back at the history of the Clemson-FSU series in preparation for this weekend's primetime renewal of the ACC grudge match.

Share All sharing options for: Historical Eye of the Tiger: Clemson-FSU

This week our Tigers take their show on the road for the second time to take on the number one team in the land: the Florida State Seminoles. Last year, Jimbo, Famous Jameis, and the gang manhandled Dabo's crew in one of the worst Death Valley beatdowns in recorded history before rolling to an undefeated season and the national title. The 2014 Tigers will seek vengeance for past wrongs and redemption for past failings as they attempt to return the favor at Doak Campbell Stadium. Will Clemson's young skill guys come out and earn their stripes on the big stage to run roughshod over FSU in their own place? Or will the Seminoles prove that last year's apparent talent-gap was legit and tame the Tigers yet again?

History shows it won't be easy, but there are glimmers of hope in every dark day and silver linings around every dark cloud on the horizon, so we'll just have to wait and see if the 2014 Tigers can join the elite few others who've managed to come away with a ‘W' in the house that Bobby built.

The most infamous moments in the series have unfortunately come at the Tigers' expense:

Weinke To Snoop (via dreschinbham)

To make matters worse, Clemson is just 8-19-0 all-time record against FSU, with an even more paltry 3-11-0 record in Tallahassee. Many a good Tiger team has made the trek down to the Florida panhandle only to come back with its collective tail between its legs. And many a bad Tiger team has been exposed against the superior talent and depth often found in Chief Osceola's tribe. So we won't dwell too long on the many times Renegade has ridden the Seminole wind to victory over our Tigers, for the numbers aren't pretty.

Now that we're all thoroughly depressed and primed for another letdown in Tallatrashy, bring on the orange-tinted sunshine! Clemson has typically played the ‘Noles tight on Frank Howard Field, even when there was an obvious disparity in talent between 1992 and 2002, so with that talent gap now considerably diminished, these Tigers can certainly play with FSU physically. And more recent trends illustrate that Clemson will score in Doak Campbell. Even before The Chad arrived, Tommy's Tigers put up some points down in the panhandle, they just couldn't stop anyone. Both trends bode well for this year's team, where the strength is along the defensive front, and Chad Morris's juggernaut promises to keep rolling now that some young playmakers have started to emerge. In short, this Tiger team has as good a chance as any previous one that has played well on the Seminoles' home turf to pull out a win. So let's close out with a look back at those far-too-few but nonetheless epic Tiger moments down Florida way.

In 1976 the Red Parker era limped to an end with a 3-6-2 final record (winless in the ACC at 0-4-1). Despite the futility, Parker's Tiger teams did possess considerable talent, but much of that talent had departed before the '76 season. Long-time Pittsburgh Steeler tight end Bennie Cunningham donned the orange and white for Parker from 1972-1975, and Stan Rome starred as a wideout in 1975 before giving up football to focus his time with Bud Foster's basketball team the following year. But despite this he was still drafted into the NFL in 1979. The 1976 team was captained and quarterbacked by a face familiar to Tiger fans-former NC State head coach and long-time Bowden assistant-Mike O'Cain. Despite this smattering of talent, however, Parker never fielded great teams, and the '76 squad was no exception. They did, however, manage the Tigers' first (and still only one of three) win in Tallahassee, beating Bobby Bowden's first Seminole team 15-13 before a "raucous" crowd of 21,473 at "the Doak." The Seminoles prior to Bowden's arrival had been abysmal, posting a pathetic 4-29 record the previous three seasons. His 1976 team went just 5-6, but showed signs of significant improvement which would be expanded on over the next three-plus decades, as 1976 would be the only losing season of Bowden's Hall of Fame career. After the season Clemson would replace Red Parker with Charley Pell, whose two seasons in Tigertown would usher in Clemson's resurgence onto the national football scene. For evidence of just how far the Seminole program has come since 1976, and how little its fan base has improved in that same span, see below: 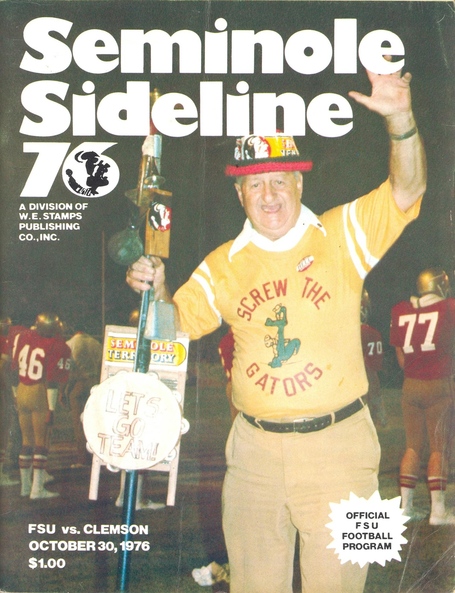 The year 1989 remains a bittersweet memory in the minds of most Tiger fans, but for yours truly it still sits atop the list of sentimental favorite Tiger teams. It was a stout bunch, with a dominant defense and a punishing running game that steam-rolled to a 10-2 regular season, capped off by the absolute mauling of one-time Heisman contender Major Harris and the West Virginia Mountaineers in the Mazda Gator Bowl. But it also proved to be Danny's last season at the helm, and that win was his swan song. That team was also loaded with young talent that returned the following year, and Clemson was among the preseason favorites to compete for the 1990 national title, which made the loss of Coach Ford all-the-more devastating for the Tiger faithful. That bittersweet season got off to a rousing success, though, for after blanking Furman 30-0 in the season opener in the Valley, the #10 Tiger's took their talents to Tallahassee to tangle with the #16 Seminoles. They came out of the gates fired up, scoring on two long touchdown drives to go up 14-0, before breaking the game wide open in the final stages of the second quarter, starting with LB Wayne Simmons' 73-yard interception return for a TD:

The Tigers then registered another knockout punch just minutes later when RB Terry Allen raced 73 yards around the left end for another score:

QB Chris Morocco, Allen, and the Tiger offense added a pair of second half Chris Gardocki field goal and milked the clock, while the defense-led by the original "we too deep" pack of LBs Doug Brewster, Levon Kirkland, John Johnson, Wayne, Simmons, Ashley Sheppard, and Ed McDaniels-continued to stifle FSU QB Peter Tom Willis and the ‘Noles vaunted passing attack before a garbage-time ‘Noles touchdown made the final score 34-23. The Seminoles would rebound from the loss (which put them at 0-2 after an opening-week loss to Southern Miss) to finish 10-2 and #3 in the country after a 41-17 thrashing of Nebraska in the Fiesta Bowl to close out the season. Clemson finished #12 in the country at 10-2 after the Gator Bowl beatdown of WVU.

In 2006 the Tigers rode into Doak Campbell at 1-1, beating the hapless FAU Owls in the opener but coming off a heartbreaking 34-33 two-overtime loss to Boston College in Chestnut Hill due to a missed extra point by kicker Jad Dean, after which they had dropped out of the national polls. Florida State entered the game at #10 in the nation and 2-0, having beaten #11 Miami 13-10 to open the season and struggled to put away Troy 24-17 in week two. The Tiger offense, quarterbacked by Will Proctor and led by RBs James Davis and CJ Spiller, along with wideouts Aaron Kelly and Chansi Stuckey, moved the ball well early en rout to two first-half touchdowns. But recurrent problems in the kicking game resulted in nine first-half points for the ‘Noles (PAT return for two, blocked field goal return for six-plus-PAT), whose offense was otherwise stymied by a Clemson defense led by DEs Gaines Adams and Phillip Merling, LBs Antonio Clay and Nick Watkins, and DB Chris Clemons. Proctor put the Tigers up 20-9 with a 20-yard touchdown run in the third, before the 'Noles hit a field goal late in the quarter, then added their first offensive touchdown of the game (and the two-point conversion) early in the fourth, to tie it up at 20. James Davis took over late in the fourth, as Clemson mounted a final drive that covered 85 yards in just seven plays, highlighted by Davis' 47-yard scamp past a confused Seminole defense down to the FSU four yard line. Two plays later Davis scored from a yard out to give the Tigers the 27-20 victory, their first in Tallahassee since 1989 and only their third all-time at Doak Campbell Stadium.

Thanks to the amateur play calling of offensive coordinator Rob Spence and shaky QB play out of Proctor for the remainder of the 2006 season, Clemson finished just 8-5 and unranked, losing 28-20 to Kentucky in a pitiful Music City Bowl performance to end the season. FSU finished even worse at 7-6 and unranked, thanks in large part to a nonexistent running game and pedestrian QB play by Drew Weatherford, but did beat UCLA 44-27 in a meaningless Emerald Bowl.

History shows that it will be tough sledding, but perhaps Brent Venables and the Tiger defense can play with the aggression they lacked in last year's Death Valley tussle to frustrate Winston and the ‘Noles offense this year. And maybe Chad Morris can continue to rack up yards and points behind a combination of savvy veterans (namely Stoudt, Peake, and Humphries) and electric youngsters (Watson, Gallman, Choice, and Scott) while avoiding the turnovers and penalties that derailed the offense in Clemson last year. If both happen, this 2014 Clemson team can beat FSU and add a fourth win to the list of Tiger triumphs in Tallahassee, and set the table for an ACC title run.