It wasn't all gloom and doom in the realm of Clemson athletics this weekend. The non-revenue sports had a very successful weekend.

While the gridiron Tigers struggled, the non-revenue sports had a successful weekend. Let's take a look at how the teams fared.

The Clemson Men's Soccer team kicked off the 2014 regular season with a 1-0 win against the Radford Highlanders of the Big South this past Friday. Radford is a decent team that, as expected, provided some solid warm up opposition in advance of the clash with the Gamecocks on Tuesday.

Clemson started in a 4-2-3-1 with a somewhat unusual starting XI. 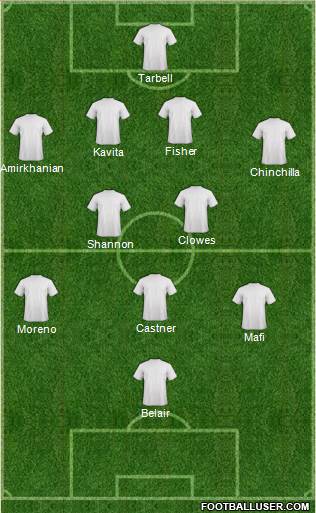 As you can see there are three new comers in the starting lineup; Chinchilla at fullback, Shannon (a recent freshman addition) at holding mid, and Mafi at attacking mid. Amirkhanian at the other fullback spot is also an interesting development. Notably not starting were Dia and Sanchez, but they would latter come on and play heavy minutes. I believe that Coach Noonan chose this lineup to test out some younger guys as well as keep the main starters rested.

Throughout the first half it became clear as to why Amirkhanian had been moved to right back. He was our best option going forward, making dangerous overlapping runs. Chinchilla seemed a little bit unsure of himself in his first collegiate start, choosing to mostly stay back with Fisher and Kavita rather than go forward.

Over the first 20 minutes or so Clemson showed some inconsistency. There were some good passes but there were also some stupid giveaways and a lack of creativity in the attacking third. Clemson was unable to get behind the Radford defense and there were no incisive runs or passes. Clemson maintained possession well but did not have many dangerous chances with the exception of a great volley by Clowes.

Campos came on for Belair with about 20 minutes left in the half. A few minutes later Dia came on at fullback with Chinchilla moving to Mafi's attacking mid position, and Sanchez came on for Moreno. These changes immediately provided an attacking spark for the Tigers. Chinchilla looked much more confident in his attacking role than he did as a defender. The runs that were lacking earlier in the half started to be made after the substitutions. That being said, there was still room for improvement. Clemson had a large lead in terms of possession and shots heading into halftime but not on the scoreboard.

Coming out of halftime Clemson stayed with the same lineup but switched Campos with Belair. In the second half, Clemson did a much better job switching the field (AKA moving the ball from side to side quickly). In the first half, the ball would too often move the wings to the center, back to the same wing again. Another set of substitutions, this time Happi for Clowes and Mafi for Chinchilla, provided another spark for Clemson. The Tigers started applying more and more pressure to Radford, but a goal didn't appear to be happening until Castner set up Moreno for a great shot in the 86th minute. Moreno received the ball from Castner, cut in to the middle, and fired a shot from the top of the box that beat the keeper to his far post.

Clemson had been improving offensively throughout the second half, with the creativity in the attacking third looking a lot better. The runs and through balls to turn the Radford defense were there and Clemson was unlucky to not score more than one. The Tigers finished with 18 shots and 9 corners, compared to 5 and 1 respectively for Radford.

Now for how Clemson performed in the different phases of the game.

Kavita and Fisher were, once again, rock solid at center back. As a whole, the team snuffed out any Radford chances with the exception of one shot immediately after our own goal. Amirkhanian and Dia both looked good at fullback fullback and provided good runs going forward. I'm a big fan of that back four. The center backs are a rock and the fullbacks recover very well. Chinchilla made some mistakes but that can be expected for a freshman playing out of position. The holding midfielders provided a good shield in front of the back line. Any time the ball was lost they recovered and won the ball back.

Clemson is still trying to replace Thomas McNamara's goal production from last year. The Tigers looked a lot better in the second half and hopefully that performance can be built off.  We looked dangerous with both Sanchez and Mafi on the field together, particularly Sanchez. We looked dangerous on set pieces, especially on corners with Kavita and Fisher coming up for those. Chinchilla looks like he will develop into a dangerous attacker with his individual skill. There was some good combination passing between the midfielders and forwards. The holding kids provided good diagonal balls for the wingers and fullbacks to run onto. Mafi looked dangerous in the preseason and is going to be important heading forward in the season. Belair is still wearing a knee brace and while it does seem to bother him a little bit he did well holding the ball up for the midfielders. Campos looked good in his limited time as well. The pieces are there, the Tigers just need to put it all together.

Moment of the Match

Obviously Moreno's goal takes the cake here. Link to a video of the goal courtesy of the Men's Soccer Instagram account. However, a close second is one particular moment by Ara Amirkhanian. After a tough challenge on a 50/50 ball that resulted with Ara getting flipped in the air and the Radford player staying down injured, Amirkhanian looked back at him and yelled "Get the [redacted] up!" It was a little warranted since the game was more physical than usual. Shannon was fouled hard at the final whistle and a couple of the players got in each others' faces.

Clemson hits the road this week, traveling to Columbia to take on the Gamecocks on Tuesday. Then they fly out to San Diego to play San Diego State and UC Irvine.

The Lady Tigers went on the road and notched two big wins, 5-0 against Elon and 4-1 against VCU. Clemson is 4-0 on the season with the other two victories coming against Auburn (2-1) and Winthrop (7-0). Sophomore forward Tori Andreski received National and ACC Player of the Week recognition after scoring 4 goals and 1 assist in the first two games. Clemson's next game is Friday in Columbia against the 12th ranked Gamecocks.

Clemson, both the men's and women's teams, won their opening race this season. The men had two out of the top five in their four mile race and the women had three in the top five in their three mile race. Senior Aaron Ramirez won for the men and sophomore Grace Barnett won for the women. Cross Country and Track have been strong programs for a number of years at Clemson and look to continue that tradition.