Historical Eye of the Tiger: Epic Moments Between Clemson & Georgia

A look back at some classic Clemson Tiger moments in the heated gridiron rivalry with the University of Georgia Bulldogs.

Share All sharing options for: Historical Eye of the Tiger: Epic Moments Between Clemson & Georgia

The most wonderful time of the year (sorry Christmas) is yet again upon us; time to tee it up, kick it off, and let it fly on the college football gridiron. For our Tigers, the 2014 journey begins just 78 miles down Interstate-85 in against the vaunted Bulldogs of the mighty SEC. This is but the latest in the centuries-old struggle between cats and dogs, but down in these parts, that feud takes on added weight whenever the red and black comes down the track to run headlong into that mystical "something in those hills"—the power of the paw. But before those fabled silver britches lose their luster amidst the glow of an orange-and-purple sunset, two days hence between the hedges, let’s take a look back at some epic moments in a classic southern football rivalry. 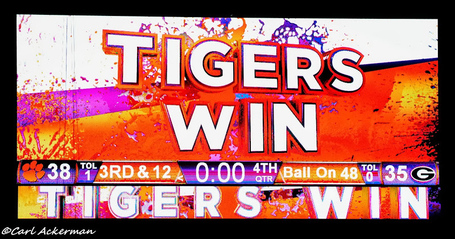 This being a Clemson site for Tiger fans (sorry puppy trollers), we’ll not dwell on the heartbreaks:

Rather, we’ll revel in the glories that have been (and come Saturday night, could be again!) for our Tigers against the dawgs. This year’s game being in the , we’ll focus on Tiger triumphs in Sanford Stadium. So let’s get to it.

In 1977, Charley Pell's first of two seasons in Tigertown, then-unranked and upstart Clemson rode a punishing defense to a 7-6 upset of 17th ranked (AP) UGA to begin its climb back to national prominence, finishing the '77 season 8-3-1, with a Gator Bowl berth, and a #19 final AP ranking, laying the groundwork for 1978's 11-1 record and thrilling Gator Bowl victory over Woody Hayes and Ohio State, 17-15 (the famed "Woody's Punch" game).

Recap of 1977 Clemson vs Georgia Football Game (via tigerray)

In 1986, a then-unranked Clemson team upset a 14th-ranked team 31-28 between the hedges in en route to a ACC championship season; a season capped by a rousing 27-21 victory over Stanford in the Gator Bowl. David Treadwell returned the favor from two years back (Kevin Butler's last second 60-yard field goal to beat Clemson in Athens in 1984) when he nailed a last-second field goal to upset the dawgs on their home turf.

In 1987, Treadwell did it again, this time in . The dawgs came into the game undefeated (2-0) and ranked #18 in the country. Not to be outdone, the Tigers also sported a perfect 2-0 record and a #8 national ranking. 82,000 fans bore witness as the Tigers rode a punishing defense, timely rushing attack, and the leg of kicker David Treadwell to a thrilling 21-20 victory. Down 20-18 late in the 4th quarter, Clemson's all-time winning-est quarterback Rodney Williams drove the Tigers down to the Georgia five, and David Treadwell broke the dawgs' hearts for the second year in a row and hit the game winner. Clemson proceeded to a 10-2 ACC Championship season and #11 final ranking, capping it off with a 35-10 mauling of Joe Paterno's Penn State Nitany Lions in the Florida Citrus Bowl.

And saving the best for last: 1981. Need I say more? After a couple of lackluster wins over lesser competition (Wofford & Tulane) to start the season 2-0,  the Tigers had done little to refute their preseason position among the unranked. But that all changed on September 18th when the #4-ranked and defending national champion Bulldogs rolled into . The Tigers "held" all-everything runningback Hershel Walker to 111 yards on 28 carries and no scores, forced him to cough up two fumbles, and intercepted Georgia QB Buck Belue fives times en route to nine total turnovers forced. Clemson QB Homer Jordan directed an methodical offensive attack, hooking up with All-American wideout Perry Tuttle for the game’s only touchdown, then tacking on two Donald Igwebuike fields goals to secure a 13-3 Tiger victory. The win snapped Georgia’s 15-game winning streak and propelled Clemson to an undefeated regular season, capped off with a 22-15 win over #4 Nebraska in the Orange Bowl to claim a perfect 12-0 season and the 1981 national championship.

As is evident from this brief trip down (good) memory lane, it’s been tough sledding for the Tigers in over the years. Most of Clemson’s brightest moments have come in the friendly confines of Memorial Stadium upon Frank Howard Field, and some of the most devastating, gut-wrenching setbacks have come between the hedges in Sanford Stadium. Whether or not that historical trend holds true this Saturday night is anybody’s guess. But it oughta be an instant classic. GO TIGERS!