How the Offense Picks Up the Blitz: Part 1

Today we start a two part series on how the offense manages the blitz and other defensive games.

Share All sharing options for: How the Offense Picks Up the Blitz: Part 1

Blitz pickup: It’s a numbers game; it’s a game of whit. It’s a game that can define a game. For every offensive staff, blitz pickup and responsibilities are a major part of weekly planning on a per opponent basis. During the offseason, there will be major focal points to mesh the responsibilities between the offensive line, tight ends, running backs, wide receivers, and quarterback. Each position has its own unique set of responsibilities and how to identify, negate, and attack the defense when a blitz is on. In this three part series we will look at how the offensive line, running backs and tight ends, and then quarterbacks and receivers handle the blitz.

First we will begin our coverage of the offensive line and how they a) identify a front, b) use this information to create blocking assignments, and c) manage rushers once the play is live.

For an offense like Clemson’s, we will generally only face 6 men in the box on passing downs. In the figure below, you can see what a base defense may look like against our standard personnel package of 3 WR, 1 TE, and 1 RB. Now the defense will shift in the box based upon the alignment of the RB and TE, but, all in all, this is a pretty standard look. The box represents "the box" on defense, an area usually defined as being one yard outside the tackles shoulders and then 5 yards deep into the defensive backfield. So in this scenario you can see that the defense has 6 players in the box with either a nickel back or will linebacker covering the slot receiver. The nose guard is on the inside shoulder of the right guard, the defensive tackle is head up on/over the left guard, the ends are outside the tackles’ shoulders. The MLB is in the gap between the left guard and center and the SLB is in the gap between the right guard and tackle.

Presnap the center will identify the mike linebacker. The mike doesn’t necessarily have to be the actual MLB as listed by formation. However, the mike is considered to be the first threat or whom the center has deemed as the biggest pass rushing threat. In this case we will label the MLB as the mike. Thus, the offensive line takes responsibility if this player blitzes.

The left side of the line has immediate responsibilities covering the end and the defensive tackle. The first rule of blocking on the offensive line is to take the first threat, which is always the closest man to the ball at the snap. In this formation the left side may receive help from the tight end, but, depending on the reaction of the WLB/S, the tight end may have a delayed release.

On the right side of the line the guard will initially help the center with the nose and keep his eyes up for either the mike, or the sam blitzing. If the mike blitzes, the right guard should move over and take over the block from the center on the nose guard while the center moves to take on the blitzing MLB (Tyler Shately’s specialty……….detect sarcasm). The right tackle is one-on-one with the defensive end.

Now all of what was just described is assuming that no linebackers or safeties walk up presnap. If the WLB/S were to walk up presnap, then the offensive line may make a "fan" or "slide" call. In this the defensive tackles will likely shift positions and the end will slide head up the tackle. The left tackle will then take on the WLB/S, the left guard will take the defensive end, and the center will take the defensive tackle. The tight end will likely stay in to help first threat on the left side. 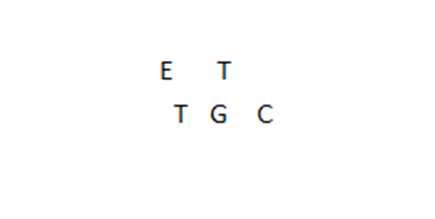 Presnap this would be the alignment on the left side for the linemen. Post snap the end will crash down towards the guard, while the tackle will loop behind (or vice versa).

There are, of course a myriad of other blitzes and formations that the defense can throw at the offense, but this sort of covers the basics. In the next part of the series we will examine what roles the quarterbacks, receivers, tight ends and running backs play in blitz pickup.