Historical Eye of the Tiger: History of Senior-QB Success in Stoudt Hands

Share All sharing options for: Historical Eye of the Tiger: History of Senior-QB Success in Stoudt Hands

The 2014 Clemson Tiger football team is entering rarified air, though not totally foreign territory, with regards to its quarterback situation and its expectations. Cole Stoudt, a senior who has performed admirably as a backup to the record-setting Tajh Boyd, now enters upon his main chance as the Tiger field general. Stoudt's extended stint as backup to a bona fide star is not unknown in the annals of Clemson football lore. Thrice previously in the last forty years have senior statesmen made their first start at QB during their senior year: Billy Lott took over for Steve Fuller in 1979; Chris Morocco succeeded Rodney Williams in 1989; and Will Proctor replaced Charlie Whitehurst in 2006. If this history is any indication, the 2014 edition of Clemson Tiger football should indeed be in "Stoudt" hands.

Steve Fuller presided over the reemergence of Clemson football onto the national stage in the late 1970s under head coach Charlie Pell (and after the 1978 regular season, Danny Ford). Fuller earned the ACC player-of-the-year award in both 1977 and 1978, the only Tiger to ever win it twice. He finished sixth in the Heisman voting in 1978. Fuller's 1977 Tigers earned a Gator Bowl bid and finished #19 in the country at 8-3-1. His 1978 team bested that effort, finishing 11-1 and beating Woody Hayes and his vaunted Ohio State Buckeyes 17-15 in the Gator Bowl to finish #6 in the nation. Fuller went on to a ten-year NFL career and won a Super Bowl with the Chicago Bears in 1985. Clemson retired his number four and inducted him into its Athletic Hall of Fame and Ring of Honor. In short, Fuller was (and is) a Clemson football legend. 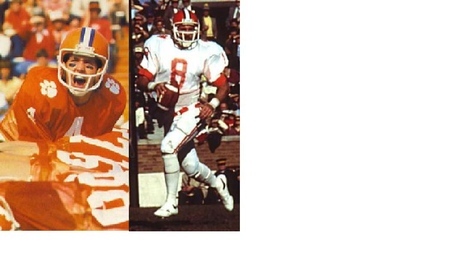 Into Fuller's large shoes stepped Billy Lott in 1979, head coach Danny Ford's first full season at the helm. Lott had seen only limited action in his first three years on campus as backup to Fuller, but in 1979, he would make the most of his last (and only) opportunity. He started all eleven games, completing 90-174 passing for 1,184 yds and four scores, rushing 166 times for 385 yds and three more scores in directing Clemson's run-oriented offensive attack. The Tigers finished the year 8-4, with memorable wins at home over UGA and on the road in South Bend, IN against Notre Dame. Billy Lott and the 1979 Clemson Tigers followed in the footsteps of greatness but managed to lay a solid foundation of even greater things to follow in the coming years.

Rodney Williams finished his Clemson career as the Tigers' all-time winningest quarterback, accumulating a record of 32-10-2 overall. He led the Tigers to three consecutive ACC titles, three straight bowl victories (1986 Gator Bowl 27-21 over Standord; 1989 Citrus Bowl 35-10 over Penn State; 1989 Gator Bowl 13-6 over Oklahoma), three straight 10-2 seasons, and three consecutive national rankings in 1986 (AP #17), 1987 (AP #12), and 1988 (AP #9). When his collegiate career ended, he stood atop the Clemson record books in career passing yards (4,647), completions (333), attempts (777), and most overall starts (44). Williams was inducted into the Clemson Athletic Hall of Fame, taking his place among the most revered Tigers of all time. 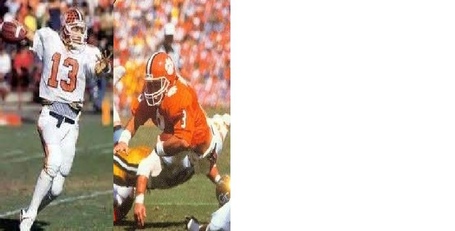 Chris Morrocco had the unenviable task of taking over under center for Rodney Williams in 1989. Behind a superb offensive line (dubbed "powerline ‘89" by the Athletic Department's marketing team) and surrounded by skill players at wideout (Gary Cooper and Rodney Fletcher) and running back (Terry Allen and Joe Henderson), Morocco proved adept at managing Clemson's power running game (81 car. for 295 yds, 3 tds) and efficient passing game (79 comps., 134 att. for 1,131 yds, 6 tds, 2 ints) en route to a fourth consecutive 10-2 season, a 27-7 Gator Bowl thrashing of Heisman contender Major Harris and the West Virginia Mountaineers, and a #12 final ranking.

Charlie Whitehurst became the starting QB with four games remaining in his freshman year (2002) and never relinquished the job, rewriting most of Clemson's passing records in the process. He finished his career as the Tigers' all-time leader in passing yards (9,665), completions (817), attempts (1,368), touchdowns (49), and established numerous single-season and single-game passing records as well. He led the Tigers to four consecutive victories over the arch-rival Gamecocks, the only Clemson QB to ever do so, and a 26-15 overall record between 2002 and 2005. Whitehurst presided over some of the most memorable moments in recent Tiger history: the 27-20 win over the Coots in the 100th game of the rivalry (marking Clemson's 60th victory); "The Finish" of 2003, which began with Tommy's first win over Papa Bowden and #3 FSU 26-10 in Death Valley, and continued on through the 63-17 thumping of the Shamecocks and the 27-14 dismantling of the top-ten TN Volunteers in the Peach Bowl; the thrilling overtime win in Miami and the brawl/beatdown of the Lamecocks in '04; the epic 36-30 overtime loss to Miami and 35-14 destruction of FSU in the Valley, as well as the 13-9 fourth-in-a-row over the Lamecocks in '05. All secured Whitehurst's legacy as one of the most talented, exciting, if slightly frustrating, quarterbacks to ever don the orange and white. 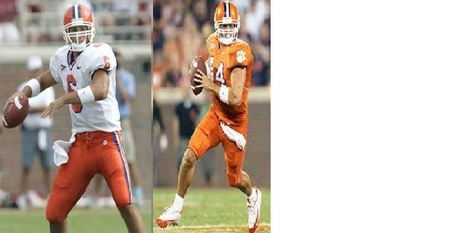 Will Proctor waited his turn behind Whitehurst before finally taking the reigns in his senior year of 2006. Proctor was a classic "game-manager," reputedly efficient with the ball and proficient in getting it to the plethora of skill guys surrounding him (183 comp., 304 att. for 2,353 yds, 16 tds, 11 ints; 61 car. for 85 yds). Reggie Merriweather, James Davis, and freshman phenom CJ Spiller lined up behind Proctor in the backfield; Aaron Kelly and Chasi Stuckey were at wideout; a veteran offensive line and an aggressively opportunistic defense helped Proctor's Tigers start the year 7-1 and rise as high as #10 in the rankings before key injuries began to catch up to them. Opponents exposed the team's overall lack of depth during a 1-4 finish. Still, Proctor led the Tigers to an 8-5 season that included a landmark 27-20 win over FSU in Tallahassee (the first since 1989) and the inaugural ESPN Gameday visit to Clemson for the Georgia Tech game, which ended in an unforgettable 31-7 dismantling of the Jackets on national TV and introduced the world to James "Thunder" Davis and CJ "Lightening" Spiller.

Tajh Boyd equaled or bettered all of these numbers from all of these quarterbacks. He left Clemson tied for the lead in all-time wins (32), and obliterated nearly every offensive record attainable by a QB (for evidence see: http://www.clemsontigers.com/ViewArticle.dbml?ATCLID=205529382). He accomplished personal milestones and achieved team goals that had long lain dormant in Tigertown, and etched his place as one of if not the best Clemson QB ever. Tajh Boyd helped reunite a divided Clemson fanbase, helped reconfigure the culture surrounding Clemson football, and helped resurrect a football program that had been floundering between abject depravity and hopeful mediocrity for two decades. Number ten helped put the power back in the paw and paid homage to past Tiger greats like Fuller, Williams, and Whitehurst by rewriting the offensive record books. His number ten will undoubtedly grace the façade of Memorial Stadium someday. 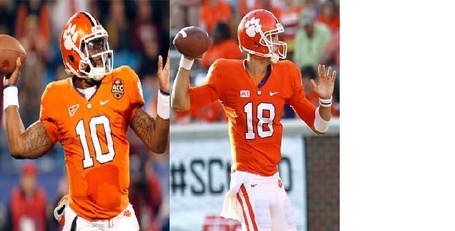 So how does Cole Stoudt, fifth-year senior from Dublin, OH, follow that jaw-dropping, show-stopping act? Just like those steady fifth-years Billy Lott, Chris Morocco, and Will Proctor before him. Stoudt doesn't have to be Tajh Boyd (or Steve Fuller, or Rodney Williams, or Charlie Whitehurst). He only has to be the best version of Cole Stoudt, and if his limited track record as Boyd's backup tells us anything (86 comp., 119 att. for 742 yds, 8tds, 1 int; 29 car. for 170 yds, 2 tds), it's that Cole Stoudt can be just that-stout. Lott was surrounded by a lot of untested youth in '79, but could count on Jerry Butler to haul in his throws and Lester Brown and Marvin Sims to tote the rock; but while Stoudt loses the two leading receivers and leading rusher from a year ago, he returns something Lott didn't have-a veteran and ultra-talented defense that should make twenty-four points hold up most nights. Chris Morocco, like Stoudt, had a dominant defense to lean on, but had the added benefit of a returning line, two proven backs, and two proven wideouts at his disposal. Proctor's situation nearly two decades later largely mirrored Morocco's-a solid defense and potentially punishing ground game-but injuries and a lack of focus down the stretch undermined that team's effectiveness.

What separates Stoudt from all of these others is individual consistency and program stability. Lott was playing for a rookie head coach; Morocco had been given little opportunity to shine behind Williams and thus had to learn "on the fly;" Proctor had talent all around him and relative coaching stability, but the program lacked competitive depth, which rendered several key injuries devastating. Stoudt takes over one of the deepest and most talented teams in Clemson history, with perhaps the most stable (and talented) coaching staff in the nation. And he possesses more physical ability and mental prowess than Lott, Morocco, or Proctor ever had. If he simply manages the game-like Lott, Morocco, and Proctor have before him-the 2014 edition of Clemson football should exceed the accomplishments of the '79, '89, and '06 teams due to its combination of talent and depth. But Cole Stoudt, whose father Cliff knows a little something about backing up and following up a legend (http://www.postandcourier.com/article/20140425/PC20/140429502), seems ideally suited to not only keep the tradition of success alive but to advance it, and lay a foundation for another #4 (http://www.goupstate.com/article/20140305/articles/140309844) to write the next great chapter in Clemson football history....GO TIGERS!