A Data-Driven View of Charlotte Recruiting

Clemson football is a major brand name, especially across the South. As such, it’s no surprise that Clemson does so well pulling top rated recruits out of cities like Atlanta and Jacksonville. What draws lamentations though, is Clemson’s inability to do so in Charlotte. Clemson’s campus is located about two hours from Charlotte, closer than any other “Power Five” program except Wake Forest and South Carolina. As such, some feel Clemson is missing a tremendous opportunity. Here we focus on hard data from the 2009 to 2014 recruiting classes to explore.

Share All sharing options for: A Data-Driven View of Charlotte Recruiting

Before digging into the data, let me say I'm excited to be back on the STS staff. After writing elsewhere since the end of basketball season, Brian gave me the opportunity to rejoin the team here and because STS's regular commenters make this site so fun, I couldn't turn it down. Out of respect for the past administrators, I won't discuss the situation with the changing of editorship or my move back-and-forth, except to say I'm thrilled to be back and look forward to discussing Clemson sports in the comment section once again. I'm extremely optimistic about what is ahead for this site!

Reading through the recent comments, there has been some discussion about how critical we will be when criticism is warranted. I hope this post serves as an appropriate article to show that I will be as objective as possible and criticize when and where appropriate, but also celebrate and compliment when and where it is earned.

Now let's dig into the numbers. For this exercise, I relied on Rivals ratings and included players from Charlotte suburbs such as Matthews and Gastonia.

4* & 5* Star Recruits from the Charlotte Metro

We look exclusively at these elite recruits because we can assume any college football program would be interested in the majority of them, given the average rating for even the best recruiting class is less than 4.00. (Alabama had the highest average star rating in 2014 at 3.92.) As you can see in the table above, Charlotte has only produced 20 four or five-star college football recruits in the past six recruiting cycles. Therefore, even if a University were to dominate the area and get over 50% of the top recruits, it would only amount to about two recruits per cycle on average. Not exactly a tremendous opportunity, though nothing to ignore.

To further explore the data, I organized it by the recruit's destination school (where they enrolled out of high school) and by high school graduating class. Below, you'll see that each row represents a university (ordered by the number of 4*/5*recruits landed) and each column represents a recruiting class. The far right column has the total number of 4*/5* recruits landed by each school and the bottom row has the total number of 4*/5* recruits in each year.

North Carolina, Florida, Georgia, and South Carolina were the only schools to pull multiple of these elite recruits to their program in this time frame. North Carolina did the best job. As you can see the they signed seven, including three in 2009.

Those seven recruits North Carolina signed represent an impressive 35% (7/20) of the top recruits from the area. This is enough to make fans of other nearby schools shutter with envy. South Carolina and Clemson combined to land only three recruits. Now to dig a little deeper, we look at each recruit by name, position, and star rating. The columns are (from left to right): destination school, Rivals 4* recruits, Rivals 5* recruits, and the total number of 4*/5* recruits.

Individual 4* & 5*Recruits from the Charlotte Metro by Destination 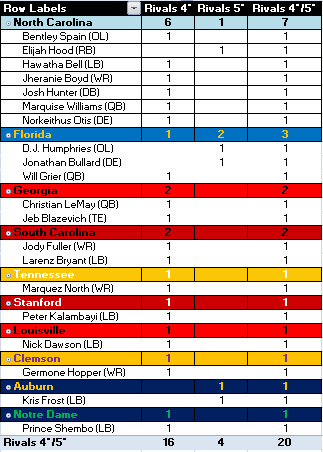 With all the detailed information now presented, we see that Germone Hopper is the lone elite Charlotte recruit from this window who signed with Clemson University. He redshirted 2012 and didn't make a big impact in 2013. He also missed part of Spring Camp due to academic issues. Although one could parse through and pick out "busts," it is not a sound logical endeavor because it supposes that elite recruits from Charlotte are not as good as elite recruits from other places. With a sample of just 20 players, this is unfair conjecture. Furthermore it fails to consider that players from other cities may be more likely to go to schools with better coaching staffs. It is best to trust the expert evaluations and assume an unspecified four or five-star will more often than not be better than a lesser rated recruit.

The above table also breaks out the star ratings to separate the four and five-star recruits. Of the four five-star recruits, three went to SEC schools. Again, this is a small sample size, but if you're a Clemson fan you'd like to do better.

Overall, we see that Charlotte does not produce a tremendous amount of elite prospects on an annual basis. 3.33 per cycle was the average for the six year window inspected. That said, no one school has dominated the area, though North Carolina comes close, pulling six of the 16 four-star prospects, and Florida pulled two of the four five-star prospects. Finally, we see Clemson has signed just one elite recruit from the area, so while the opportunity may not be as huge as many have lamented, it is hard to deny the data which loudly proclaims that Clemson is not succeeding in landing the elite college football recruits from the Charlotte metro area.