Inside the Clemson Offense: Stretching the Ohio State Defense via Vertical Routes

Share All sharing options for: Inside the Clemson Offense: Stretching the Ohio State Defense via Vertical Routes

Several years ago while examining Chad Morris' Tulsa offense we noted the "Verticals" concept(s).  As we've discussed here before, The Chad likes to push the ball down the field to loosen up defenses.  With receivers like Martavis Bryant and Sammy Watkins at your disposal, there is even more incentive to push the issue and stretch defenses.  We took a good bit of time to completely explain and explore this topic several years ago so I won't rehash that article here.  I do highly encourage you to go back and review that discussion to assure complete understanding of this concept (article can be found here).

What I do want to do today is look at a 1st quarter Orange Bowl touchdown pass to show how Clemson used this for a big Sammy Watkins touchdown early in that game.  Clemson lined up in the gun with trips to the field side of the formation, a TE with his hand on the ground on the boundary side, and the back on the boundary side of the QB.  Ohio State lined up with base nickel personnel with two deep safeties.  Ohio State chose to play a two deep zone.  Clemson countered with a vertical combination of routed to the trips side.  Bryant (the outermost receiver) runs a fade, Sammy the seam route and Seckinger a post.  The manner in which these routes were run is critical.  Bryant attacked the outside shoulder of the corner causing him to turn and run.  Seckinger cleared the linebacker prior to heading for the post allowing the LB to sit and force the safety to attack the post route.  Sammy ran his seam route to assure he had inside position on the defender covering him.  The inside position made this an easy pitch and catch for the Tigers.

On the boundary side, the TE runs an out / flag and the back peels out and does the same.    The read for Boyd was pretty straight forward.  He knew he would have Bryant 1 on 1 with the fade and based on the strongside safety's response, would have one of the other two receivers in a favorable situation.  The backside TE and back-out routes assure that the middle of the field will be clear of the second safety. 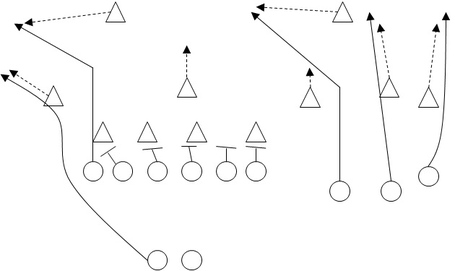 There are a lot of interesting items associated with this football play.  First, kudos to Chad Morris for setting this up via formation.  Morris anticipated OSU would play zone and by featuring trips and running all three receivers downfield, he assured there would be an opening downfield based upon the safety's decision.  The strong-side safety was placed in a tough situation here.  The linebacker's both dropped then sat and the boundary-side safety was providing support for the TE near the sideline meaning he was out of the play.  Ohio State chose not to be aggressive at the LOS, giving each of our guys a free release.  This assured Seckinger and Watkins would get downfield and force the safety to make a decision.  This free released almost assured that this play would produce an open receiver downfield.  The safety likely identified that the linebackers were going to sit and not chase so he jumped the post as he had to.  This left the defender covering Sammy with no help over the top.  A well-run route by Sammy on the exposed defender turned this into an easy six.