Each May/June, USA Today publishes financial data pertaining to athletics departments at public universities.  Obviously, private schools can do whatever they want and typically choose to keep their information internal to the institution so they are not included in this data.  In keeping with the path we've previously chosen, we again will examine USA Today data. This database provides information on public universities only and can be found here. Keep in mind that this information is information reported for 2013.  Our article on the 2012 ACC data can be found here in case you are curious how the numbers changed year over year.

I pulled data for all schools that will be in the ACC this fall (include Louisville, leave out Maryland). This gives us a better idea of how folks stack up in the "new" ACC. As mentioned earlier, private institutions don't generally divulge their data so we could draw nothing from Miami, Pitt, BC, 'Cuse, Wake, and Notre Dame. We again get a look at how the defending football national champions' war-chest looks and how newcomer Louisville compares to its new conference brethren.

All this being said, these numbers are interesting talking points and a good way to generalize things.  They are not by any stretch, the end-all numbers.  Understanding the entirety for an entity like this requires a whole lot of digging.  We take the time to do it only for Clemson on an annual basis as trying to evaluate many other schools would simply be too time prohibitive.  Our Clemson analysis is comprehensive and includes both IPTAY and CUAD numbers.  A sample from FY 2012 can be found here.  Those numbers should be considered the best set of numbers as they came straight from Clemson and are all-encompassing.  The ones below should be used for basic comparisons and to create some general thinking in terms of where everybody stands in AD spending space. 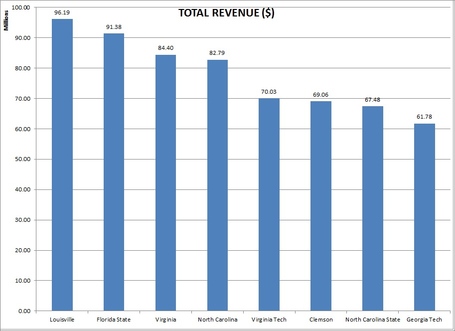 Florida State and Louisville are clearly ahead of the pack in terms of reported revenue. The Seminoles raked in over $91 million last year.  Interestingly, this number was down significantly from its $100 million in FY '12 revenue. Louisville raised its revenue from nearly $88 million in '12 to over $96 million last year.  Virginia and UNC were both able to report over $80 million in revenue. Clemson reported just $69 million in '13.  This is down from $70 million in athletic department revenue reported in '12 but again still roughly on par with VPI. Georgia Tech at $61 mil pulls in the tail end of this group.  NCST interestingly was under $60 mil in '12 but were able to overtake GT by reporting revenues in excess of $67 million in 2013. 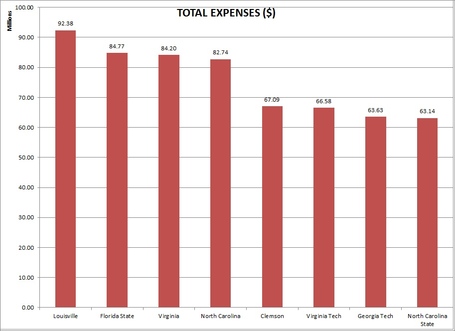 Obviously, revenue should drive expenses. Accordingly, Louisville, FSU, UVa, and North Carolina spent the most. Louisville's reported spending was in the $92 million range while the other three spent in the low/mid $80's.  Clemson and VPI again spent around $67 million and GT / NCST pulled up the rear spending approximately $63 million each.. 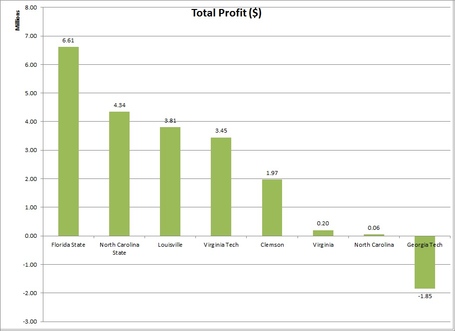 Profit is simply the delta between the two items shown above. This may not be the proper term as proceeds for the AD / university aren't necessarily used in the same fashion as a typical for-profit company.  Some of the money is set aside for a rainy day fund, others to pay down existing debt.  FSU was able to clear over $6 million in 2012. Louisville, NCST, and VPI were all in the $3.4 - $4.5 range here. Clemson banked just under $2 mil.  Interestingly, GT was @1.85 million in the red in 2013.

Florida State has been raising cheddar for some time but did bring in a bit less last season. They make a lot of money and they spend a lot of money--which is what you have to do these days to get to the top.  It will be interesting to see what their funds look like after last football season.  Louisville has done a great job generating revenue. They successfully leveraged facility upgrades into revenues and are on sound financial footing--taking over as big $$$ dog in the ACC.  UNC is always going to bring in loot because of their basketball program. As I've said before, I have no clue what Duke's numbers are but you have to believe that they are flush with cash--or at least their basketball program is definitely flush with cash. Clemson and Virginia Tech are close in earnings and spending while Tech and NC State seem to have the most trouble generating revenue and, thus, have reduced spending.  The NC State jump in revenues last year was impressive and something I'll be watching moving forward.

I'll also note that not having an itemized budget to pour over from each school does leave some question as to how good a comparison we have here. Clemson segregates IPTAY from the general ledgers. Some schools lump their IPTAY in with their numbers. The general information and trends, however, are interesting to view and show which schools appear to be in the best positions for athletics success.

As promised, the raw data can be seen below.