This is our annual "Nancy" post. We go out and evaluate the uniform selection for our Clemson Tigers over the course of the previous football season and provide feedback on what looked good and which combinations need to be banished forever.

This annual post began following the 2009 season.  It was following years of ridiculousness that I had enough.  You'll likely recall that throughout the Tom Bowden regime and early in Swinney's term as head football coach our team haphazardly chose its uniform combination each week.  I was irritated and penned this article back in the summer of 2010 to bring this stupidity to the forefront and show how out of control the whole uniform situation had gotten.  In short, Clemson looked like a bunch of assclowns mixing orange, purple, and white with reckless abandon in a very illogical and silly manner.  Since the 2009 season, Clemson has gradually improved its uniform selection to the point where I don't have to complain quite as much.  I thought after the 2012 season we had this item licked.  Clemson wore Orange Tops / White Pants at home (and in the Peach Bowl) and White Tops / White Pants on the road.  They did this all year and it was fantastic.

Unfortunately, Clemson deviated slightly from this strategy last season though I cannot complain as much due to the circumstances.  Clemson's home attire was pretty consistent sans the game against The Citadel and the bowl game.  You all know my stance on this matter.  I like orange shirts / white pants at home and white shirts / white pants on the road.  If there is some special occasion where the game is large enough AND the team has earned it / deserves the extreme privilege, then break out the orange pants.  Otherwise, don't deviate.  I especially dislike the use of purple and do not condone it's use in the uniform scheme.  We look like dinosaurs from a children's television show in all purple.  The orange / purple shirt / pant combination is rough on the eyes and just looks silly and amateur.

This season Clemson deviated from home standards for Military Appreciation Day.  With Purple Heart Award recipient Daniel Rodriguez on this team, I understand why the university and the team chose to go all purple here.  I don't really like the combination but for this one time occasion, it seemed appropriate.  Actually, I'll deviate a little bit and say that if Dabo gets another veteran who did so much for this country and provides the many, many positives that Rodriguez provided this program then break them out then.  Do not consider making anything involving the color purple as primary on a normalized basis.

Now Clemson can have a bonfire, fueling the flames with the balance of the purple crap that still may be in the Death Valley equipment coffers.  Then they need to ban the purchase / receipt of any more purple uniform items.  Now that the purple / purple combination has been used for Military Appreciation Day, Clemson can look for another unique method to commemorate our troops (and, yes they need to be commemorated for assuring we live in the greatest country of them all).  I'd prefer a patch or maybe a permanent helmet sticker that shows support for the military all weeks of the season.

The other item of interest was the use of orange pants against Ohio State.  I was a bit disappointed when I saw them as getting rolled by FSU then losing to SCar for year #5 did not seem to make this team worthy of the orange pants.  The fact that it was the Orange Bowl gave Swinney reason to wear them and the Tigers responded well.  Winning big games in Orange pants used to be a tradition at Clemson.  We got away from treating the orange britches with the respect they deserve and mixed them into the casual uniform choice.  It appears as though we are getting back to reserving them for more appropriate occasions.  I do, however, prefer to see them in combination with orange shirts because that's how Clemson used to do it (sans the time Danny and crew went out and beat the dogshit out of SCar in 1989).

Here is a sampling of the uniform choices for the 2013 Clemson Football season: 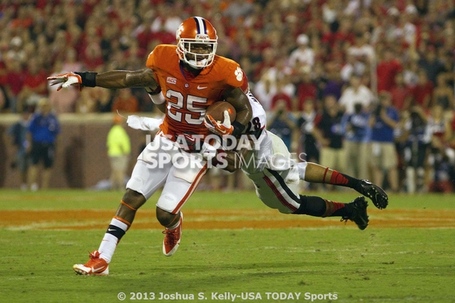 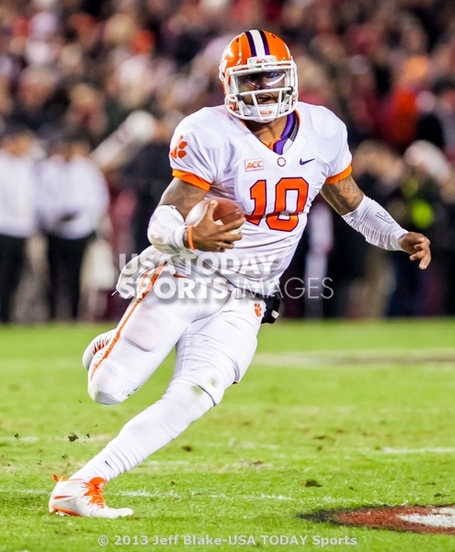 Clemson Citadel (Really hope this was a one-time use item for Military Appreciation Day & to honor DR's Purple Heart Award.  Purple anything has no business being used as primary shirt or pant color.) 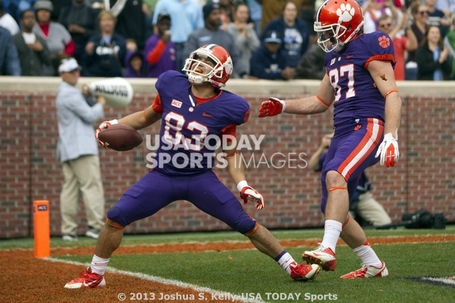 Clemson Ohio State (Considering the outcome and the magnitude of the game (it was the freaking Orange Bowl), it worked out well.  With Clemson's previous game being a loss in Columbia, I wasn't particularly in favor of allowing the privilege of the orange britches but, as mentioned earlier, it was a big win.  This combination should be used on very rare occasions.) 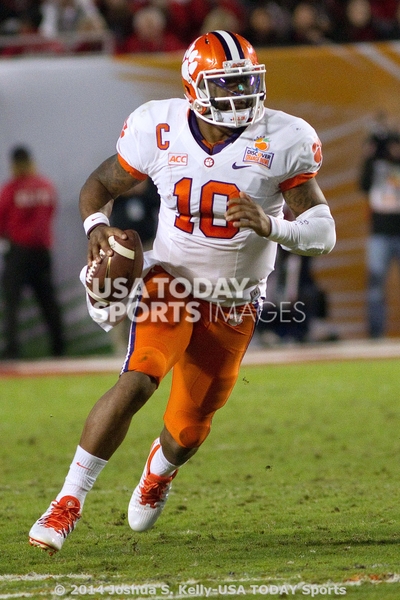