We did not put together an analysis prior to the Orange Bowl back in January.  Since the bowl, I received several requests to put that article together.  This one may be a bit late but is of interest to many of our viewers.  Apologies for the tardiness but better late than never.

We'll compare these two teams' talent levels prior to the 2014 Orange Bowl based on officially released two-deep depth charts. Depth charts for both teams were attained DIRECTLY from the Clemson website (www.clemsontigers.com). A pdf version of this can still be found there (as of the time of this writing) if you are curious. I will go ahead and tell you that because of injuries and depth chart adjustments between the release of this information and game time, some items here may be a little out of place but in an effort to maintain consistency, I continues to use both teams' depth charts as presented on the official website.

Overall, OSU outpaced Clemson by quite a large margin in terms of recruited talent on both offense and defense.  There was about a half a star per player difference between the two teams on both offense and defense.   Specialists' talent levels were about equal for both squads.  This category is about worthless and next season I'll likely make adjustments on its presentation because its non-weighted inclusion shifted the overall average quite a bit. 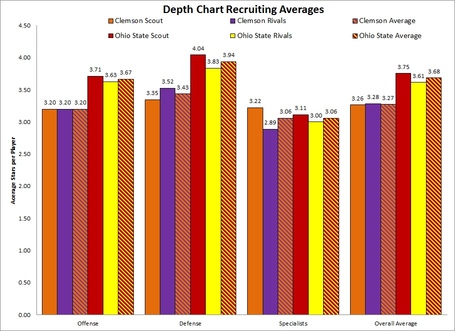