2014 Recruiting Cycle: Outside the ACC

Share All sharing options for: 2014 Recruiting Cycle: Outside the ACC

We've taken a quick look at the 2014 recruiting cycle for ACC teams (plus Notre Dame) and now want to discuss teams outside the ACC that Clemson has played recently and / or frequently recruits against.  My list includes SEC teams, former ACC member Maryland, and Orange Bowl foe Ohio State.  Like the previous assessment, we took www.rivals.com data to qualitatively evaluate the players.  We'll again keep this simple and only look at the number of players signed and the Rivals star average of those signed.

As we've mentioned time and time again, this item directly reflects a team's recruiting strategy.  While some teams cyclically have big and small classes, some have a strategy to "recruit and hold" players for four full seasons (thus consistently "average" class sizes), some have a strategy that includes encouraging non-contributors to find another school after a couple years (average large size classes), and others have to deal with attrition due to early draft entry and transferring for one reason or another.  Obviously, these scenarios can mix and match based on the coaches and unique situations that sometimes arise.  We've been through all this before, so I won't rehash it and bore you here. 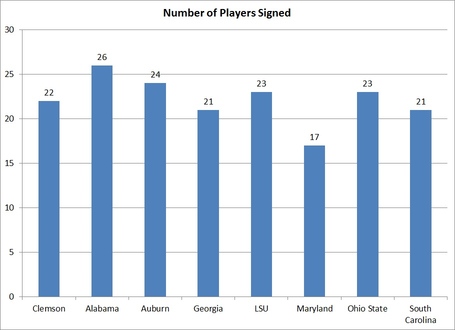 Outside of Maryland, you see schools content with 21 to 26 players.  I really was not surprised to see Bama sign 26 as Saban is notorious for assuring he gets productivity out of his scholarships and the Tide frequently has star players leave early for the professional ranks.  Auburn is adjusting a bit to Malzahn's new regime and recruiting changes associated with this change and I would not consider Maryland's program on the same level now as others in this list.  Otherwise, the others appear to have a system they like and numbers that make them comfortable.  As I've said before, 22 for Clemson is not a bad average at all.  I'd like to bump this average up a couple.  This increase would involve more active roster management.

Again, we gave Rivals' opinion the nod in this qualitative analysis.  Below we show the average star rating for signed players per the Rivals experts for each team being evaluated. 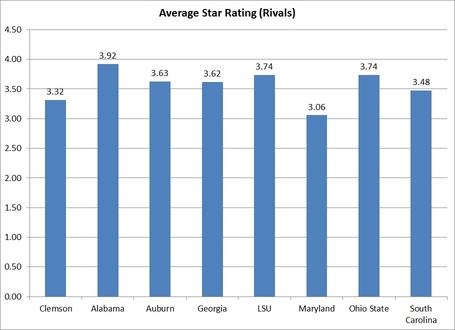 Clemson, at 3.32 stars per player, trailed the rest of the group sans Maryland.  Bama cleaned up averaging near four stars per signee.  Maryland lagged the field at 3.09 stars per player.  The others were around the 3.5 mark or higher with another demarcation between Carolina and Auburn, Jawja, LSU, and OSU.  While Clemson's 3.32 stars per player is definitely a very good number, it clearly lags the better out of conference schools the Tigers faced since '08.

Clemson looks, to the naked eye, to be 7 out of 8 against the folks mentioned above in terms of '14 class based solely on the numbers above.  While Clemson's recruiting numbers are very good, it is apparent there are many teams in the South who are cleaning up and filling the cupboard every year with jam up players.  In fact, six of the eight teams listed above were included in Rivals' Top 10 classes last cycle with Clemson landing at #13 and Carolina at #16.  I believe that Deshaun Watson pushed Clemson past the Gamecocks as Clemson lagged Carolina in average star rating, brought in just one more player but featured the only five-star recruit for the cycle for either school.  UMd was way down the list in the 50's.  Interestingly, all teams above Clemson in the Rivals 2014 cycle rankings were from the ACC or SEC sans USC & Ohio State (and I guess Notre Dame if you want to differentiate them from the ACC).  This shows just how hard it is to recruit in this region of the country.  It also shows that while Clemson is doing a good job bringing in talent, there is still room for improvement to catch these other schools.