Every year we put together brief articles in an effort to collect general observations about recruiting cycles and how Clemson compares to other teams through these cycles.  Today we will quickly discuss the 2014 ACC Atlantic and how teams within this division fared in the 2014 recruiting cycle.  As evaluating every team and every player is difficult, I have chosen two basic overall metrics to observe.  First is the number of players taken in a cycle.  The second defers to the "experts" and their general player ratings.  Feedback I've received prefers the Rivals information so I've chosen to exclusively use the Rivals data for this exercise.

Teams and coaching staffs have different recruiting strategies and all of them revolve around numbers--specifically class size.  Some coaches view a scholarship offer as a 4 - 5 year commitment to a player.  These coaches average smaller classes year over year because lack of non-graduating attrition makes year over year scholarship availability fairly predictable.  Other coaches would love to keep a player for four years but realize that there are busts and want to replenish these players with guys who might actually contribute.  Consequently, these coaches encourage non-performers to find opportunities elsewhere and generally have larger classes each year.  These coaches, along with those who experience larger amounts of attrition (early draft entry, transfers for various reasons, etc...) see more turnover and, thus, must go out and sign larger classes each year.  Other coaches intentionally oversign each year then hope/make the numbers work when August rolls around.  Long and short, studying year over year class size is a quick way to evaluate a staff's personnel management strategy from a very high level.

Generally speaking, I want to see Clemson bringing in 20+ every year and would like to approach 24 per class.  That obviously requires attrition prior to being on-campus four years but that is what big boy football programs do.  I'll also note that players can sign multiple times with a school.  This is typically done by a player being placed in a prep school to work on academics then signing again with a school.  That being said, the number of players signed in February is not necessarily the number of incoming freshmen on scholarship in August.  All this plays into recruiting strategy, oversigning, etc... 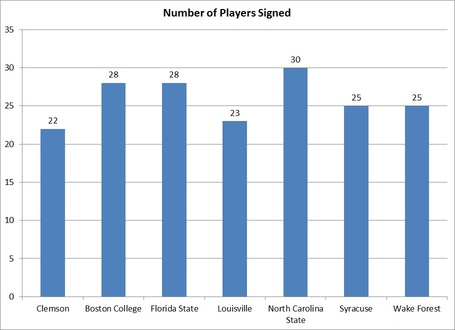 Within the ACC Atlantic, Clemson signed the fewest players at 22 this cycle.  NC State was able to pull in 30 signees while FSU and BC both pulled 28 players.  I don't view 22 players as a small class necessarily.  I do think it is interesting that 5 of 7 division schools were able to sign 25 or more players this cycle.

Again, we cannot accurately evaluate all school's signees as the best way to evaluate a player is to study film and create your own unique opinion about said player.  Obviously, this is not possible for the 180+ players signed within the division.  Because of this, we went to the "experts" to get an objective, quantitative assessment for each player.  Here we chose www.rivals.com information and used it across the board.  This seemed to be the only way to quantitatively compare all these schools in a fair manner. 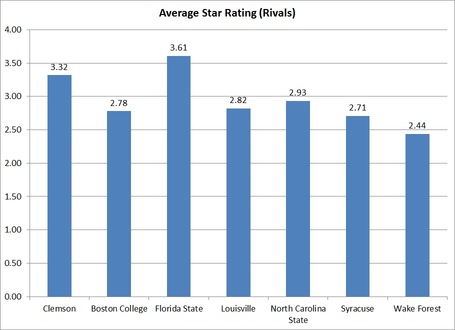 The defending National Champs added to their superior talent with the class of the field with an average Rivals star rating per player of 3.62.  Clemson had a very good 3.32 star per player average.  These were the only schools to average over 3 stars per player.  Clearly Clemson and FSU have featured the best talent in-division for some time now.  This is no surprise as it is not too big of a surprise that others didn't bring in the upper talent.

Overall, Clemson looks to have clear cut second best 2014 Class in the division.  Clemson's respectable 22 players signed gives adequate numbers while the 3.32 stars per player rating shows that the Tigers brought in quality athletes.  FSU had a big class who were, per Rivals, much more talented per player than any of the other schools' recruits.  NC State also had a big class and their had an average player ranking over 2.9 stars.  From a purely numerical perspective, I'd have to assume them as the third best class based on this data.