Earlier we discussed the 2014 recruiting cycle and how ACC Atlantic schools fared.  Today we want to discuss how non-ACC Atlantic schools (Coastal Division + Notre Dame) made out in the last recruiting cycle.  Like the previous assessment, we took www.rivals.com data to qualitatively evaluate the players.  We'll again keep this simple and only look at the number of players signed and the Rivals star average of those signed.

As we've mentioned time and time again, this item directly reflects a team's recruiting strategy.  While some teams cyclically have big and small classes, some have a strategy to "recruit and hold" players for four full seasons (thus consistently "average" class sizes), some have a strategy that includes encouraging non-contributors to find another school after a couple years (average large size classes), and others have to deal with attrition due to early draft entry and transferring for one reason or another.  Obviously, these scenarios can mix and match based on the coaches and unique situations that sometimes arise.  We've been through all this before, so I won't rehash it and bore you here. 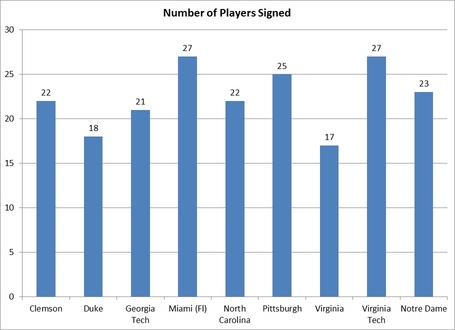 What you see here is Clemson is right in the middle in terms of players signed (three teams signed less, four signed more, and UNC signed 22 just like our Tigers).  As I've said before, I'd like for Clemson's program to average near 24 per year but a 22 player class is definitely not an overall numbers problem.  Of note, UVa and Duke brought in 18 or fewer new signees, VPI and the "U" count 27 in this class.

Again, we gave Rivals' opinion the nod in this qualitative analysis.  Below we show the average star rating for signed players per the Rivals experts for each team being evaluated. 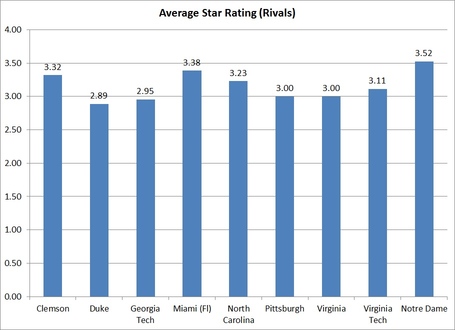 As you can clearly see, these numbers are much tighter than the ones we saw out of ACC Atlantic teams.  Notably, Clemson (at 3.32 stars per player) trails both Miami and Notre Dame in the stars per player discussion.  This information is not exactly surprising but shows there is fire power in the ACC outside of Florida State & Clemson.  The next item of interest is the player quality out of the rest of the Coastal.  Pitt, UVa, and VPI each averaged a player star rating of 3 or better.  Duke and GT were at 2.89 or better.  This is a significant improvement over the information posted in regards to the ACC Atlantic.

I believe that, per this data, Clemson is clearly third best out of this group. Miami and Notre Dame brought in more players at a higher average star rating than Clemson.  Virginia Tech's 3.11 star per player average and 27 players definitely caught my eye, but I'll give the nod to Clemson there.  UNC was impressive at 3.23 star average and 22 signees.  I'd also deduce from this information that the ACC Coastal is becoming more balanced with upper level talent when compared to the ACC Atlantic.  The Atlantic really only showcases Clemson and FSU whereas the Coastal--along with Notre Dame--has more teams accumulating quality D-1 talent.