We'll continue to tie up loose ends from items outstanding from the past year or so. Today I'll continue the examination of FY '12 financial data. In keeping with the path we've previously chosen, we again will examine USA Today data. This database provides information on public universities only and can be found here. Each late- spring / early-Summer they update their database so we'll likely pick the FY '13 data when available and look at this data.

I pulled data for all schools that are currently in the SEC along with Clemson. This gives us a better idea of how Clemson compares to SEC institutions. Unfortunately, private institutions don't generally divulge their data so info from Vandy was not included. We do get a look at how some college football juggernauts make and spend money and get to compare our Tigers to rivals along with those who we recruit / play against.

In order to fully digest the finances, you really have to plow through more detailed and granular financial data. We do this for Clemson each year. This article does not tackle the issue to this level but is useful to gauge things and get general feelings about programs...so take this data for what it is and feel free to discuss below in the comments.

This category is dominated by Alabama. This is no surprise as the Tide have been in the National Championship hunt pretty much every year since 2008. Florida has been a Football force for 25 years and a Basketball power recently. This is no surprise as the Gators' AD generates cheddar. In all, six SEC Athletic Departments claim over $100 million and Arkansas was barely outside this $100 mil club. Clemson and Mississippi State sat around the $70 million mark while Ole Miss and Missouri were stuck in the low $50's.

Bama, Florida, LSU, and UT each spent over $100 million in FY '12 while Auburn shelled out over $96 million. There were five schools who spent between $80 and $90 million. Clemson was on spending pace with Mississippi Sate and Mizzou around $67 mil and Ole Miss was most frugal at $51 million. 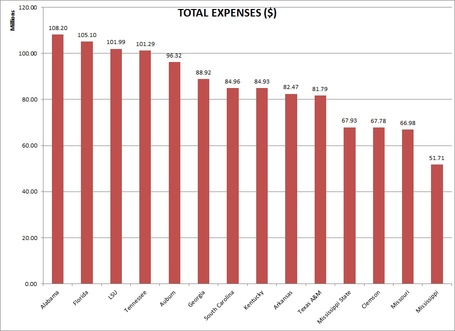 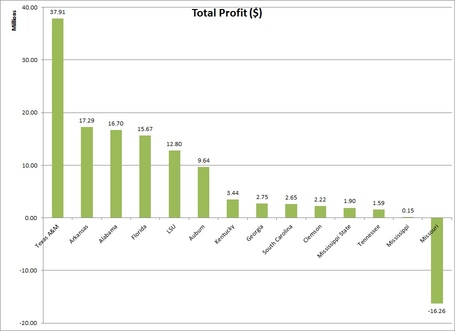 Texas A&M profited an incredible $37+ million in FY 12. This is an impressive number and A&M continues to increase its take both by gaining revenue through SEC deals and increased football interest/giving over the past year or so. A&M is planning some major facility improvements so it will be interesting to see how these numbers pan out over the next couple years. Don't feel bad for Arky, Bama, UF, or LSU as AD's at each of these schools claimed profits in excess of $10 million. Other schools posted more modest profits with Mizzou spending a lot more cheddar than it took in.

We've discussed the growing financial separation SEC institutions are creating between themselves and our Clemson Tigers. Much of this is from their commissioner. Year after year, commissioner after commissioner, the SEC is committed to football and doing things that help it stay ahead of the curve. From its conference championship game concept back in '92 to its network debuting this fall and through its preferred bowl selection next January, these guys are ruthless in these matters and committed to staying ahead. Compared to our discussion on the ACC, only FSU reports numbers that compare with the upper tier of the SEC in terms of AD reported accounting items.