In the final discussion of USA Today FY 2012 Financial Data, we'll look at this year's Top 25 college football teams. We've discussed ACC and SEC teams recently, so I have omitted those schools from the discussion. The USA Today informational database provides information on public universities only, so those teams' info obviously isn't shown here. The overall database can be found here. Each late- spring / early-Summer they update their database so we'll likely pick the FY '13 data when available and look at this data.

I pulled data for all schools that were ranked in the final football polls along with Clemson. This gives us a better idea of how Clemson compares to the better football playing institutions. After eliminating ACC, SEC, and private schools, we are left with ten universities. Obviously we included Clemson with the data.

In order to fully digest the finances, you really have to plow through more detailed and granular financial data. We do this for Clemson each year. This article does not tackle the issue to this level but is useful to gauge things and get general feelings about programs...so take this data for what it is and feel free to discuss below in the comments.

Ohio State rakes in a very impressive $142+ million dollars in cash while both Oklahoma and Wisconsin brought in over $100 million for the AD in FY '12. The $82 to $90 million revenue group includes Oregon, Michigan State, Oklahoma State, and Washington. Clemson and UCLA were in the low $70's range while Arizona State (approx. $60 mil) and UCF at $41 million brought up the tail end of the group. 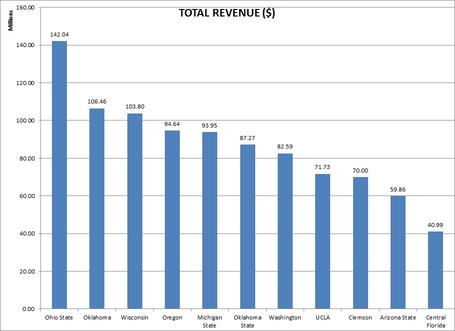 The highest expense numbers fell out in a similar fashion to the revenue numbers above. Oklahoma moved down the list a bit and Oklahoma State up on the spenders. Most of the others maintained similar rank spots in terms of expenses along with our Tigers. 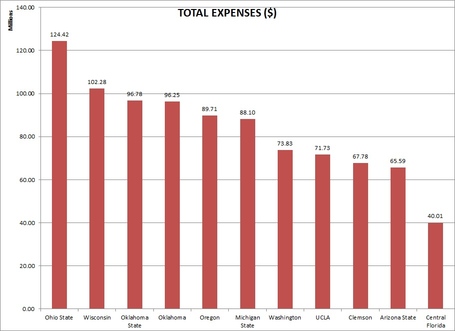 The profit numbers shook out as follows: 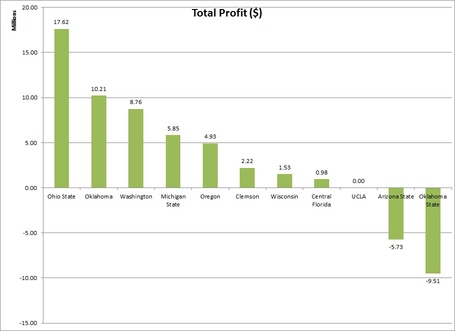 UCLA broke even while both Arizona State and Oklahoma State had an Athletics Department that ran a deficit. Ohio State was able to report an overall AD profit in excess of $17 million and OU over $10 million.

Clemson's overall ranking amongst ranked schools in terms of AD reported financial was near the bottom 10. Ohio State, Oklahoma, and Wisconsin reported boatloads of cash flow. As you would expect, Central Florida was at the bottom of the heap. The overall data table can be seen below.