Have you ever found yourself sitting on your couch on a rainy Tuesday, scouring previous NFL drafts to see where Clemson football players have been drafted? Well I have. Here's what I found.

Share All sharing options for: Clemson University: A Football Factory?

Since Dabo Swinney took the reigns of Clemson's football program back in 2008, Clemson's reputation for producing legitimate NFL prospects has seen a considerable boost. In fact, since the 2009 NFL Draft (the first  NFL Draft following Swinney's promotion), twenty-three Clemson players have been drafted. Of these twenty-three, here's where they were drafted: 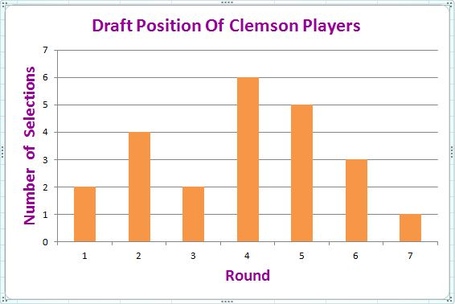 While it may appear that Clemson has a knack for producing mid-round picks, the average round that Clemson players have been selected has actually been steadily increasing since the beginning of this five year period:

As you can see, since 2009, the average round in which a Clemson football player has been drafted has improved significantly every year since Swinney took control (with the exception of last year, which I believe was simply a dry year for Clemson draft prospects with the exception of DeAndre Hopkins). A more graphic display of this recent trend: 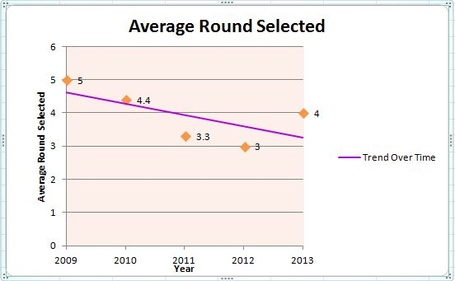 Clearly the quality of professional football prospects produced by Clemson is on the rise (as illustrated by the descending purple trendline). With improved recruiting and increased national exposure, I fully expect this trend to continue moving forward. If you combine all of these factors it becomes evident that Clemson is slowly but surely becoming a football factory for the NFL.