Sunday's series finale with the Terps was rained out, so Clemson will settle for a two game sweep to conclude their final ACC series with Maryland before they bolt for the B1G.

The Testudo Times gave a great game breakdown of Friday's doubleheader which you can read here.

Both Gossett and Crownover were great and Shane Kennedy is already making a huge impact on the lineup. It's good to get him back from knee injury earlier than expected. It seems we have found a solid 1-2 punch in the rotation with Gossett continuing his excellence and Matthew Crownover really finding his groove. The duo combined to go 17 IP 2 ER in the two-game sweep over a decent Maryland team. Additionally, it seems that for the first time in ages we have a true closer that Jack is willing to consistently use in save situations. Matt Campbell has a perfect 0.00 ERA (though there are some critical inherited runs in there) and saved the first game on Friday.

We're still going to need the defense and middle relief to improve. Before the error-free win in the second game of the doubleheader, we committed 13 errors in our last eight games. We're also going to have to find somebody to pitch the 6th, 7th, and 8th when Goose and Crownover are not carrying us. So far, Clay Bates and Drew Moyer have impressed me the most, but we'll need to see more from them and have others step up.

Now, on to the standings. We see UNC, GT, and to a greater extent NC State are not where we they need to be. At this point, it looks like one of these teams will fail to qualify for the ACC tournament. Hopefully Jack can get some momentum going and earn a top three seed come tournament time.

*Correction: We previously stated that the ACC Tournament would be a modified double elimination tournament. That is not the case. It is as explained the in the tweets below. An image of the bracket is at the bottom of the page.

@ryan_kantor @mercator88 No. Pool play as in the past, but with 10 teams in the tournament and two new play-in games on Tuesday.

Clemson gets Furman and Winthrop on Tuesday and Wednesday and then hosts NC State in a Saturday, Sunday, Monday series with the Sunday and Monday games on ESPNU. This is an opportunity to bury NC State in the standings and solidify our position as the the ACC's best after UVA/FSU. 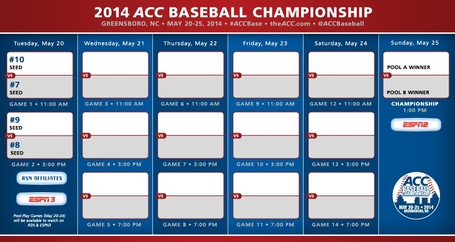