The NIT field has been announced and Clemson is a #3 seed. They will face #6 Georgia State at 9pm on Tuesday. The game will be played in Littlejohn Coliseum and is on ESPNU.

Don't let the name fool you, the Georgia State Panthers are not a bad team. KenPom ranks them as the best team in Georgia at 60th, just 9 spots below Clemson. They were 17-1 during the regular season Sun Belt play, but lost in the second round of their conference tournament to Louisiana Lafayette by 1 in OT, so they made the NIT as a regular season conference champion. The best team they played all season was Southern Miss (63nd) who they lost to in OT. KenPom is giving us a 68% chance to advance past the Panthers.

UGA jumped us to get the #2 seed which is a travesty. UGA is only 75th in KenPom and has 19 wins (to our 20) against a much weaker SEC schedule. They were 6-6 in the non-conference including a losses to Georgia Tech, Davidson, and Tempo, all of whom we beat. They picked up 13 wins in the SEC + SEC tournament, but their best wins are against Arkansas (who they split with), LSU (who they beat twice), and Missouri (who they beat twice). I'll take our wins over Duke, NC State, Maryland, and Miami over those all day. They closed the season 9-3 and there was some serious recency bias in the seeding here.

Fortunately, the committee gave us a de facto #2 seed by putting in the same quadrant as Illinois. Kudos to Greg Wallace for discovering this quirk:

Clemson is a No.3 seed in the NIT and will host No.6 seed Georgia State Tuesday on ESPNU.

And if the Tigers win that, they could have another home game. No.2 seed Illinois can't play home games (arena renovations).

#2 Illinois and #1 St. John's should be very competitive with us, should we face them in our quadrant, but if K.J. is able to play up to his standards we certainly have a strong opportunity to beat them and advance to Madison Square Garden.

#1 SMU is 32nd in KenPom. The Mustangs belong in the NCAA tournament, plain and simple. That's the team I least want to face, but that won't happen unless we both reach the final four. Larry Brown, the former Detroit Pistons coach is the head man there and has got the program on the right track.

Although my first reaction was disappointment at not getting the #2 seed, all is well in that we have an opportunity to host 2 home games and avoid SMU until the final four. We have the field shown below, and we'll be discussing this more in upcoming articles as we cover the NIT until Clemson is eliminated or crowned. 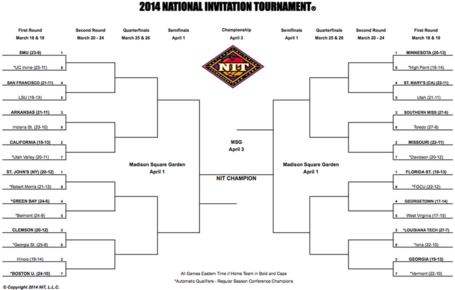 For easier reading, I have it shown again below.