Clemson traveled to Winston-Salem for their first conference road series of the year. Due to the rain on Sunday, they played a doubleheader on Saturday. We recap all the weekend baseball below.

Daniel Gossett took his turn on Friday and pitched well enough to win. He didn't give up his first hit until the third when Nate Mondou pulled a no-doubt home run over the RF wall. Clemson answered with a 3-run shot by Chris Okey, who started behind the plate (pushing Boulware to DH). The score was 3-1 after 4 innings.

In the 5th, Gossett allowed a shot to deep center. Tyler Slaton ranged way back, jumped for the ball and slammed into the wall. He stayed down for a few moments, and it looked like he had made the catch. The crowd watched on waiting to see both if he would be ok and if he had the ball in his glove. When he got up, he found his glove empty and the score tightened to 3-2.

The 6th got a little dicey as Gossett walked two before Wake elected to sacrifice the runners to second and third. The decision backfired as Gossett struck out the next batter, who only needed a deep fly ball to tie the game and walked the following. With bases loaded and two outs, the ball was blooped into RF where Steven Duggar charged in for the shoestring catch to hold the lead. Gossett exited with a 3-2 lead and a solid, if not spectacular, line: 6IP, 2ER, 2H, 4BB, 4K.

After that it was a familiar scene. Clate Schmidt threw a flawless 7th and returned for the 8th. In the 8th, he allowed consecutive walks. Matt Campbell came in for the two inning save with runners on first and second and allowed a single and a double allowing both inherited runners to score.

After 8IP, Wake Forest starter Jack Fischer turned it over Aaron Fossas who closed the game out. Okey, who deserved to be the hero and accounted for all of Clemson's RBI, struck out to end it. As usual, Okey, Duggar, and Baum carried the load on offense. They accounted for all of Clemson's hits. Gossett had his breaking ball working and was effective, but didn't go deep enough to shield himself from our uncertain bullpen.

Matthew Crownover started by striking out 2 in a 1-2-3 1st inning. He gave up a solo HR in the second, but otherwise cruised through the first 4 giving up just 3 hits. His 12-6 curve was sharp and effective.

Meanwhile, the lineup was doing it's job. A 2-out steal from Wilkerson following by a timely single (yes, Clemson had a timely hit!) by Jay Baum put us on the board in the 2nd. Clemson continued to be extremely aggressive on the bath paths and finished 4 of 6 on stolen base attempts. Every time Clemson had a 1st and 3rd situation, the runner at 1st stole 2nd while the runner on third dared him to make the throw.

With the score knotted at 1 in the 3rd inning, SS Tyler Krieger took a base on balls. That was followed by a Boulware double and a Steven Duggar RBI fielders choice. Okey then knocked one another. An error allowed another the inning to continue for Baum who knocked in two more with a double making for a 4-run 3rd inning to take a 5-1 lead. Two singles and an error allowed an earned and unearned run in the 4th as the Tigers pushed it to 7-1.

The 5th is where things got interesting. 3 singles and a double netted 2 more runs and made for a long inning and increasing the lead to 9-1. Crownover returned for the 5th, but had lost his rhythm after the layoff (per a conversation I had with him after the game). He managed to get the first two batters to pop out and ground out, but balls started falling in after that (literally right as the scouts who came to watch him walked away). He allowed two singles, a double, and then another single before inducing a fielders choice ground out to end the inning and his day. He left with a 9-4 lead.

Kyle Schnell started the 6th and loaded the bases without recording an out. Then, in comes freshman Drew Moyer. He had some atrocious numbers prior to this game and I couldn't help, but think Jack's confidence in using him in this situation--bases loaded, no outs, in a 5-run game--was a bit misplaced. Moyer proved me wrong. After promptly allowing an RBI single, he got a strike out, allowed another RBI single, and then induced 2 fly balls to escape the inning with a 9-6 lead still intact. Both runs were scored to Kyle Schnell. He stayed in for the remainder of the game and finished with a beautiful 4 innings save. No runs were scored to his name. Clemson added one in the 8th and 6 in the 9th, but the game was competitive throughout, and Drew Moyer had himself the best game of his young career.

Jake Long started the final game of the series and was what I call "effectively wild." He threw nearly as many balls as strikes, yet sat Deacs down quickly. To be fair, I will point out that there was a fairly tight strike zone. Regardless, he had great stuff and cruised through 5 innings of 1 hit ball.

Meanwhile, the Clemson offense went to work with an RBI double from Jon McGibbon in the 2nd. An Okey single added one more the in 5th which ended with the bases loaded after a McGibbon strikeout. Clemson tacked on 3 in the 6th with 2-run moonshot to RF by Tyler Krieger and a sacrifice fly by Chris Okey. At this point, Clemson had a commanding 5-0 lead heading into the bottom of the 6th.

The Deacons took a more conservative approach in the 6th and it paid off. The first two batters walked before the #2 hitter LF Grant Shambley singled to load the bases. A groundout would give the Deacons their first run of the game, 5-1. A single gave them another two, 5-3. That was followed by a hit batter than left runners at first and second with one out. At that point, Coach Leggett turned to the bullpen and called in Clay Bates.

Clay Bates immediately induced a double play ball to SS, but it took a high bounce off the turf (yes, turf) causing Krieger to commit his 8th error of the season. That left Bates with the bases loaded and just a two run lead. This was a spot where Bates easily could have become flustered and given the game away. He didn't. Instead he allowed just a sacrifice fly before striking out the last batter of the inning with what he calls his "slurve."

Clemson mustered 2 in the top of the 7th with 3 straight singles and a Chris Okey sac fly. Bates returned for the bottom of the 7th and sat them down 1-2-3, while reaching 97 MPH on Wake Forest's wonky radar gun. (It was all over the place according to the scouts nearby. He probably wasn't throwing 97, but even if it was 94 that's darn impressive for college ball.)

Despite going 7.2IP in a win over App St. on Wednesday, Zack Erwin came in and pitched the 8th. He left a few curve balls up that could've been hit, but pitched well enough for a scoreless inning with just a single. Matt Campbell came in to close it out and was painting the strike zone with fastballs striking out the first two swinging on heat. He allowed a single before ending the game with a fielders choice. Despite losing on Friday, Clemson recovered to win both games of the doubleheader and shockingly enough the bullpen came through huge in both wins after coughing it up Monday and so many times before. Clemson is 12-6 (5-1) after taking 2 of 3 in Winston-Salem. 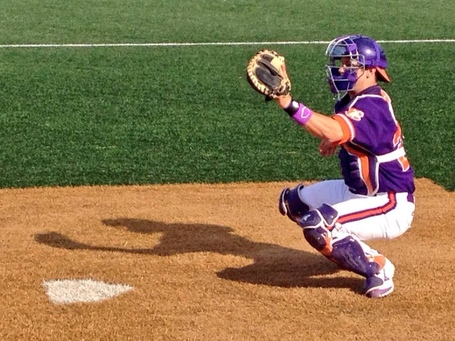