A Clemson perspective on the first day of the ACC tournament 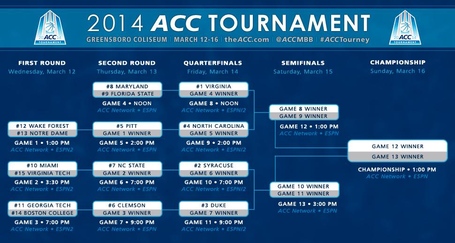 The ACC tournament begins today with three games among the bottom 6 teams. Clemson earned the #6 seed after collecting 10 ACC wins and therefore has earned a bye from Wednesday's action. There is a lot of praise to be given to our players for their commitment to get better, something Coach Brownell indicated some lacked in 2013. Last year they entered the tournament as the 11 seed (of 12 teams) and promptly lost to FSU. Add Syracuse, Pitt, and Notre Dame and somehow we improved by five spots. This was possible because our offensive efficiency (a stat that considers strength of schedule and tempo) improved from 225th to 162nd while our already solid defense moved from 53rd to 17th in defensive efficiency. We'll discuss the progress in more depth in our season review, but for now, let's talk about today's action.

There will be three games starting with the #12 v. #13 game which pits #12 Wake Forest versus #13 Notre Dame. The Deacons beat the Irish by 7 back in January when they were 14-6 (they are now 16-16), but that game was in Winston-Salem. Wake Forest is a different team away from home and as a result KenPom gives them a 42% chance to win. There are a few interesting story lines in this one:
1. Wake Forest Head Coach, Jeff Bzdelik will almost certainly be fired with a loss. In fact, he'll almost certainly be fired with a win, but maybe a run to the championship game can save his job and anything that could possibly keep Jeff Bzdelik at the helm in Winston-Salem will help us remain above them in the ACC standings long-term.
2. The one freshman who did not transfer away when Bzdelik took over in 2010-11, Travis McKie, is still on the team and with a first round loss would be the only 4-year player in modern Wake Forest history to never win a postseason game (ACCT, NIT, or NCAA). The boys over at Blogger So Dear don't want to see that and neither do I.
This game tips at 1:00pm so most of us will be left to check for scoring updates.

The #10 v. #15 game will follow at 3:30pm and will showcase two old school Big East teams with Miami and Virginia Tech butting heads. VT is the weakest team in the ACC both in the ACC standings and by KenPom where they are ranked 191st. In hindsight, the job Seth Greenberg did in Blacksburg was extremely impressive and very under-appreciated. For those who complain about Clemson's lack of history and facilities in basketball, just take a look at what Virginia Tech has to work with. Dell Curry and Bimbo Coles are the most notable NBA alumni and Cassell Coliseum has wooden seats and ceiling fans (see image below). Miami plays the low-tempo style I've come to enjoy and because the winner of this game plays the 7pm game versus NC State in Clemson's session on Thursday, I'd like to see the Canes win to set up a worthwhile game heading into ours tomorrow. KenPom gives Miami a whopping 80% chance to beat the Hokies. 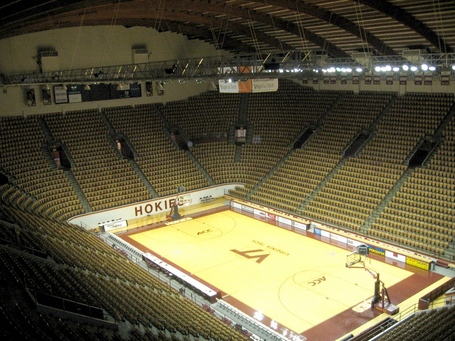 The one we'll be watching most closely is the 7:00pm game between #11 seeded Georgia Tech and #14 seeded Boston College. The winner of this game will face Clemson on Thursday.

Georgia Tech is playing well after beating Syracuse in the Dome and closing the season out with a convincing home victory over the aforementioned turkeys. Boston College has also beat Syracuse, but closed out the season 1-4 since that overtime victory (also in the Dome).

Georgia Tech has battled injuries throughout the season which in part has led to their disappointing year. Trae Golden did not play against us in our first meeting, but made 4 3-pointers in the rematch. The scoring guard is a senior transfer from Tennessee and will be playing possibly his final collegiate game. Another Yellow Jacket maybe playing his last game is RS senior Daniel Miller. Miller is their starting center and best player. He snags about 8 rebounds per game, boasts an impressive 116.4 Ortg, and was named to the ACC All-Defensive team. His mid-range game is very impressive for a big man and despite being a North Avenue Nerd, I can't help but like the guy.

On the other side, Boston College has the electrifying sophomore Olivier Hanlan who is averaging 18.6 PPG. He put up 38 early in the season against Florida Atlantic, 27 against us, and 29 in the season finale at NC State. At this point though, he may still be best known as the freshman that scored 41 in a game of last year's ACC tournament. That came against none other than Georgia Tech. GT has already beat the Eagles twice this season--the latter coming in a barn burner--and is projected to win 69-68 (59%) according to KenPom. It'll be interesting to see if they can make it a hat trick versus the Eagles, and if so we'll get a chance to do the same to them.

SuperTigerC posted a poll (here) asking who you want to win. I'm certainly torn. On the one hand, I think Georgia Tech is the better team and thus Boston College is the easier matchup. Additionally, I agree with SuperTigerC's sentiment that it is extremely difficult to beat the same team 3 times in a season (though UNC may beg to differ). However, we're also talking about a team we've beaten 9 times in a row. When asked about the difficulties of preparing for the tournament without knowing your first opponent, Coach Brownell indicated that it might be a bit easier to prepare for Georgia Tech since we've played them twice since we last met with BC and because they play a style more similar to our own. Also, the opportunity to beat the Jackets three times in the same season and stretch the streak to double-digits would be a special and unique stamp to put on the season.

Finally, I want to touch on something I ran across on Twitter this week. With the new teams joining the ACC, some want to see the ACC tournament moved out of Greensboro. I currently live in the Triad so the location is convenient for me, however I can see the logic behind the discussion. If I'm being honest, Greensboro is hardly a destination town and the tournament would be quite the spectacle if it were played in a venue like the Barclays Center or Madison Square Garden. One idea would be to maintain the tournament in Greensboro every other year, holding true to tradition, but cycle through other venues in bigger cities like Atlanta, Charlotte, D.C., Boston, and New York in the other years. Another option would be to move it to Charlotte and brand the Queen City as the hometown of the ACC (similar to Atlanta and the SEC). An ACC tournament in Charlotte still caters to the conference's beloved North Carolina schools while also moving closer to Clemson and as a major market with a more intriguing downtown scene, it would be a better destination city for fans coming from afar. What do you think? Be sure to share your thoughts in the comments below.

All of Wednesday's games are slated for ESPN2.