We've done chili before, but that recipe was a quick cook, this one is meant to cook all day. Chili con carne is made with big chunks of meat rather than ground beef, but I tend to throw some in just to give it a varying texture. Also, you can substitute dark game because the long cook time will completely remove the gamey flavor. If you ever have a few pounds of deer meat, this is a good way to get rid of it that everyone will eat.

I've deviated from this recipe just about every way possible, but this is my baseline to work from. This will balance some savory with some heat, but not too much for anyone.

1/2lb of bacon, chopped medium - dont get the lean bacon for this, you want the fat.

3 jalapenos (if you want to step the heat up one notch, go with serranos) minced up and stemmed

1 28oz can of crushed/diced tomatoes

2 tblsp lime juice (not the sweetened stuff, the real stuff)

The reason for using a 5lb chuck is because it has good marbling and you chop it yourself to decide how much fat you want to incorporate, plus its cheap and the meat reacts well to long cooktimes. The grocery store will just label it as stew meat and take out the fat. There will be a large piece of gristle that runs right through the chuck, and you'll throw away at least a half-pound of it.

Step 1: Cook the chopped bacon over medium heat until the fat renders out. Add the crisp bacon to the crockpot. You really want to leave that fat in the skillet.

Note: I have used italian sausage instead of bacon, you want to take it out of the casing. It will step up the heat a little, but you may have to use more oil in the next step because of the lower fat content.

Step 2: Season the beef with salt & pepper to your taste, then drop into the skillet with the bacon fat. Cook at medium-high until its just turning brown around the edges. Do this in two batches. Use only enough oil as necessary if you run out of bacon fat, or add more bacon fat from breakfast to the pan. Add meat to the crockpot. 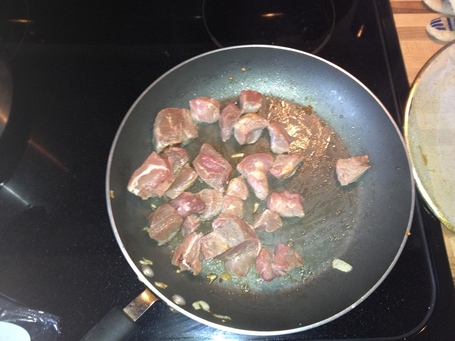 Step 3: Hopefully there will be some bacon fat left. Add the onion, jalapenos, cumin, chili powder, and 1/4 tsp salt. Cook until the onions have softened up, about 5-7 minutes.

Step 4: Add minced garlic and cook it for 15 seconds, then drop a can of tomatoes in and scrape the bottom of the pan. Once its up to a full simmer, pour it into the crockpot. 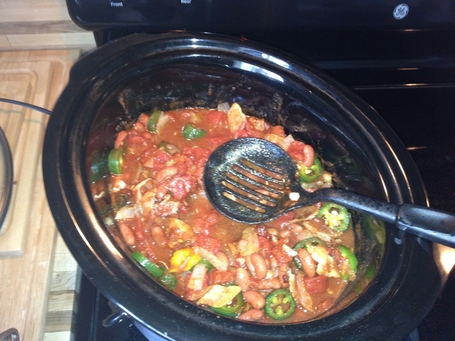 Step 5: Add the rest of the ingredients to the cooker, except the lime juice and cilantro. Drain all the liquid out of the kidney bean cans, you want the beans only. Add only enough chicken broth to submerge everything. It may or may not be 4 cups.

Note: if you want more texture to the beans, you may wait a few hours before adding them. The long cook time is for the beef. 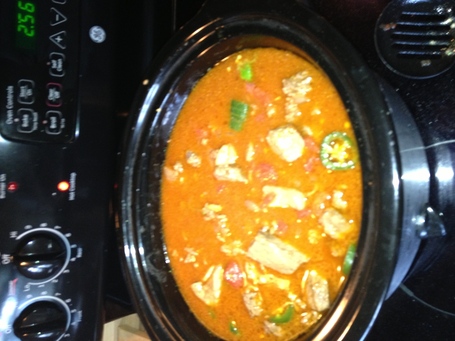 Step 6: Now comes the thickener step. This is where I get lazy, but with the broth and liquid from the tomatoes and beans, the chili really must get thickened with something or its just watery. I've used ground up corn chips, ground up Doritos, ground up Tostitos, etc. Corn flour or Masa, the traditional thickener, sucks IMO.

Most of the time I will take a small bowl and put in 2-3 tblsp of corn starch, then mix with COLD water. Add it to the cooker once it starts boiling around the edges, and stir it well. That's what I did this time. 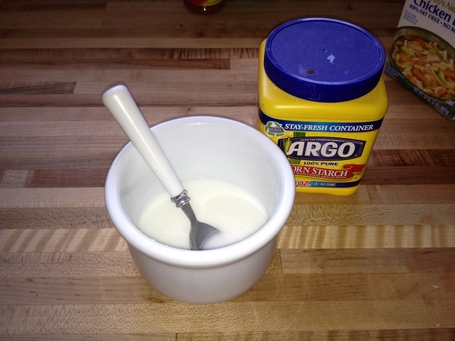 What works the very best though is to buy soft 6-inch tortillas and put several in a blender with HOT chicken broth. Its unusual to see, but I'm telling you it works the best to thicken and also add flavor.

Set this on high for 6-7 hours, or low for 9-10. Stir it occasionally. Add the cilantro and lime juice to the pot before you serve it. The longer you let it sit the better it'll be.

Enjoy with a darker beer, an Amber will work, but I'd personally go with a Belgian Dubbel or Tripel.

How to raise the heat level within reason for those that aren't chiliheads: You'll taste the jalapenos in the baseline, but the first step is to swap for serranos. The chipotles add more of a smoky soft heat rather than a hard bite. 3 Serrano for 3 jalapeno and don't seed them. The white rib inside the pepper is where the heat really lies. Adding cayenne pepper, 2 tsp, will take it up one more notch. Finally, if you like heat like I do, you can add Scotch Bonnets/Habaneros.

Be sure you wash your hands if you are mincing peppers up, especially the Scotch Bonnet. It doesn't matter if you touch your eye or not, it'll burn your hands.

My favorite variations are to add in ground pork, there will be a sweetness difference because of the natural pork flavor along with the softened texture. You can add the browned pork at any time but I leave it in all day. I also tend to throw in a lot of venison or other red game meat into this recipe because the gameyness will be completely gone after 6-7 hours, and you won't even know its deer.