A potentially very dangerous road trip for the Tigers awaits.

Share All sharing options for: Clemson travels to Boston to Battle Boston College

My feelings on last weekend's game can be summed up best with this clip:

It began to appear our Clemson Tigers were going to get TECMO'D and lose to the Louisville Cardinals when Deshaun Watson left with an injury (after Germone Hopper dropped what should have been a 70+ yard TD pass shortly beforehand), and the team (namely Cole Stoudt) supremely screwed up the last drive of the first half for no points.  Then we had the slip/bad angle/WTF moment from Robert Smith in cover 2 that almost gifted the Cards a go-ahead (and likely game winning) TD pass.  I know I was ready for blood pressure medication after that game having had past late game meltdowns (see GT 2000, GT 2004, Maryland 2006, BC 2007) flashing through my mind before the defense held on to win the game.  Needless to say, things are more tenuous with our star quarterback on the shelf for a month.

Now the Tigers journey north to Boston to face the scrappy Eagles and their coach who rivals our own in wearing his emotions on his sleeve: 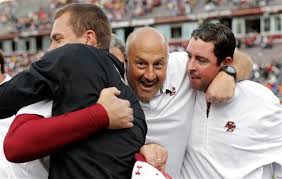 Boston hasn't exactly been a fun house for the Tigers since BC entered the ACC.  The Tigers suffered defeats jerked from the claws of victory in 2006 and 2010 as well as looking less than dominant in wins in 2008 and 2012.  Now the Tigers face an Eagle squad who has posted some impressive outings this season against the real USC and the wolfpeckers last week.  Let's take a look at the matchups.

Clemson offense versus BC defense:

All Tiger fans will return to feeling very anxious when the Tigers have the ball now that Cole Stoudt is back at the helm.  Hopefully the supporting cast has grown enough to the point to help Stoudt be a game-manager because he just doesn't have the type of skill set to carry the team like Watson.  Some fans have been pretty rough on Cole, but hopefully the team will rally around the senior in the role he really is suited for, the backup, and step up their games.  Every game is critical if the Tigers want to stay in the Atlantic conversation and contend for a major bowl.  Boston College is like all the others not named Florida State in that they want to get to Clemson's level as a contender.  Unlike last week, Chad Morris has had the week to tailor the game plan for Stoudt instead of Watson and hopefully that will result in better execution and red zone efficiency which was lacking in the Louisville game.

Boston College has put up good defensive numbers, including limiting NCST to 217 total yards and no points after the first quarter.  The most eye opening game was against USC when they completely stuffed the Trojan run game to the tune of 20 net yards.  Boston College has usually been known for "bend but don't break" types of defenses that are strong against the run and vulnerable to the passing game.  Clemson surely has had major problems running the ball on BC over the years and on paper this looks like a mismatch in favor of the Eagles.  Most Tiger fans are resigned to the reality that the team just isn't going to be a dynamic running offense this season.  There are issues on the offensive line which have been well documented, but just as problematic has been the lack of a difference maker at running back.  Freshmen Adam Choice and Wayne Gallman have had their moments, but neither has shown he can beat a safety one on one which is usually the difference in a 5 to 6 yard run (with good blocking) and an explosive play of 15-20.  This has put added pressure on the line to block really well.  The 2006 line was a very good run blocking line, but guys like James Davis, Reggie Merriweather, and especially C.J. Spiller routinely made unblocked guys miss.  Hot Rod McDowell was also very good in space and hard to tackle one on one.  Clemson needs that type of presence to emerge.

BC features multiple veterans on defense, including a few in the "he's been there forever" club like linebacker Sean Duggan as well as safety Sean Sylvia.  Sylvia is a big hitter and has been very good coming down on the run game.  At some point, a Tiger running back has to make him miss and make a play.  The upside is the Tigers have faced athletic and multiple fronts of just about every sort from UGA to Louisville, so there isn't anything they should not have seen by now.  I expect we will see a lot of the type of drive we saw late in the Louisville game where the Tigers try to run it on a five or six man front and use the quick throws on the perimeter if the box gets stacked.  It will be essential that Adam Humphries and the tight ends block effectively on the outside for those screens to Scott and Hopper.  Morris must protect Stoudt and the OL from obvious passing situations because Boston College will follow Louisville's approach of heavy blitzing in those situations.  Watson was killing the blitz but Stoudt hasn't yet proven he can do that.  I believe it will be extremely vital to get out to a lead in this game as it is unlikely the Tigers have enough firepower with Stoudt to mount comebacks like we saw with Tajh Boyd at Maryland in 2011 and NCST at home in 2012.  BC is running a base 4-3 defense but like most folks these days, they are very multiple out of it.  They are probably blitzing more this year than what we've been used to seeing out of them, which is a sign they are more confident in their secondary.

It sounds like a broken record now, but once again Saturday's game likely rests on this matchup.  Boston College enters this game as one of the best rushing teams in the land.  They feature not 1, not 2, not 3, not 4, but 5 graduates on the offensive line (something I've never seen before) who bring a load of experience to the table.  Behind them is a three-pronged rushing attack similar to what you see out of an true option team.  Tyler Murphy, aka Florida transfer #2, is leading the charge with an impressive 711 yards and 8 TD's so far this year.  He is very good at running the zone read game and is capable of busting huge runs if the run fit isn't right or you miss a tackle.  Their top running back is Jon Hilliman who is already over 100 carries for the year and 7 rushing TD's.  The third option in their run game is the jet sweep action using the diminutive but speedy Sherman Alston who is averaging 12.2 yards per carry.  Stopping the run is paramount to handling the Eagles.  Pittsburgh was able to hold them under 150 yards on the ground and Colorado State held them well under their 315.7 yards per game average as well.  Clemson has not been challenged in the run game like this since the Georgia game for sure.  If Clemson can handle the inside run game, then the very good team speed should make the perimeter game a problem for the Eagles.

The good news in defending Boston College is they are not a very good passing team.  They depend on catching folks overplaying the run to hit some big throws, but what I've seen out of Tyler Murphy is a very erratic thrower of the football.  He does have a strong arm, but he lacks accuracy and I've seen him miss some wide open guys several times the couple of games I've watched.  For the season he's only hitting 55.8 percent of his throws.  The Tigers should be in very good shape should they force the Eagles into passing the ball over 20 times.  I suspect that Venables will have the Tiger secondary on an island so the safeties can help on the run game, so it is important they don't lose focus and give up something cheap.  Forcing turnovers like what we saw last year against BC or last week against Louisville would be just what the doctor ordered.

In the end, if the Tigers can hold Boston College under 200 yards on the ground then this should be a win.  If the Eagles climb over 200, then things will get very dicey.  The good news is the Tigers have been battle tested and have improved immensely in discipline against the run.  Grady Jarrett has yet to be controlled by the opposition inside, and the work of the line as a whole has allowed the linebackers (like last week with Boulware) to get a free run to the ball.  Boulware matches up well against run first teams where his weaker area (coverage) isn't able to exploited.  Tony Steward is back this week so the depth is there to combat things.  Corey Crawford and the Gambler have been major factors in shutting down the sweep plays.  Guys have to play great assignment football and need to POUND Tyler Murphy at every opportunity.  Whoever has the QB in the run game needs to hit him no matter what.

Color me totally awestruck by the Clemson Special Teams actually being a major POSITIVE factor in a game!

Lo and behold it actually did happen!  Adam Humphries didn't get creamed on the catch and took one to the house and Ammon Lakip was perfect on his field goals, including the bank shot action on one.  Other than the rugby punt fail from Pinion, the special teams were a major plus against the Cardinals.  Would it be too much to ask for that to happen again in Boston?  Let's hope not, because with a diminished offensive attack the Tigers could really use the help in this area.  The team certainly will struggle to make up for mistakes in this area should they occur.  Let's see if Lakip can keep form on the road, which to this point has certainly NOT happened.

This is a bit of a scary game for sure.  ESPN usually puts Clemson on upset alert, but this is a time when it could be very merited.  Addazio has his team thinking they can play with anybody, and that was evidenced last year when they gave Florida State a tussle for a good bit of the day in a way our own Tigers could not.  The Tigers will need a focused effort in an environment not on the level of what they are used to this year.  If you think about it, the Tigers have played in front of no fewer than 70,000 this season.  They aren't going to get that level of atmosphere in Alumni Stadium and will need to bring their own intensity.  Here are my keys to victory:

We'll check back on these things on Sunday and see how it all turned out.