Where Does the Clemson Football Program Get its Players?

Share All sharing options for: Where Does the Clemson Football Program Get its Players?

A recent article from our Ohio State SBN counterpart analyzed this question for the Buckeyes and their interest so obviously I wanted to find this information for our Clemson Tigers. First, I'll give credit where credit is due. This is an awesome tool that Mode put together and can be found here. Those guys mined ESPN roster data and concatenated it into the nice presentable form shown henceforth. I'll note that all information below is based on individual numbers (i.e., only "how many players) not per capita numbers and from 2013 season information

I was not too surprised by what I found but clearly thought it interesting enough to put here. I hope this will spur discussion about recruiting strategy and cement where this team's base arises. Now the goodie...

I first was interested in which parts of the country produced the most college football players. Here is information on where all Division I players are from: 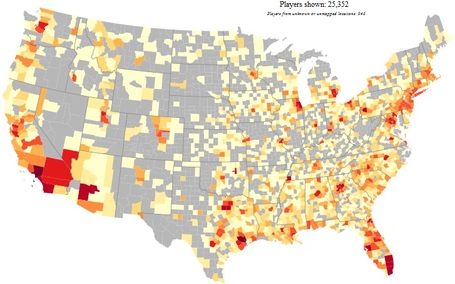 What you'll notice is probably what you expected. The most fertile areas for college football recruits lie in Southern California, East Texas, South Florida, and scattered through larger cities around the country. The map above illustrates that there is a lot of talent spread out across the Southeast in addition to the hotspots mentioned earlier. I'll caution that these are not necessarily recruited or scholarship athletes but athletes on D-1 college football rosters. Now that you know this very high-level information, we'll look at Clemson's roster distribution. 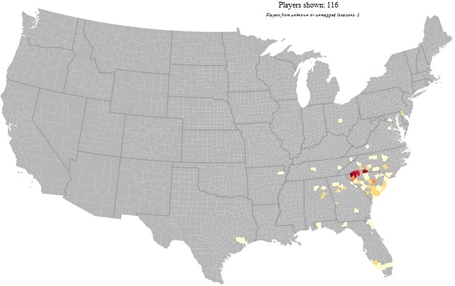 Again, there is little surprise regarding where Clemson's players call home. Most of the roster grew up in the upstate of South Carolina with many more in-state students. Clemson has a sprinkling of athletes across the Southeast including recruits from South Florida. Because these are just roster players (not necessarily scholarship nor recruited players), this is not too surprising (intuitively you'd expect more local folks to be inclined to walk-on, for example). I'd like to see more evidence of in-roads in North Carolina and the Atlanta area, but am not surprised by this distribution.

I then was curious about where the rest of our conference's teams get their players. Below is information on ACC teams' rosters. 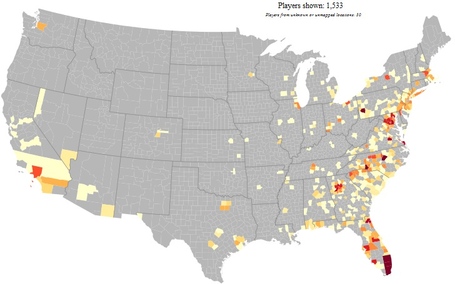 Again, this distribution didn't contain too many surprises. ACC teams were comprised of players from up and down the East Coast with a very high concentration of people from South Florida. The items that most caught my eye was the clear presence of South Florida and ability for some of these East Coast teams to recruit out in California. South Florida produced a ton of players but this makes obvious geographical sense for FSU and Miami and many schools, Clemson included, make it a point to recruit this area.

Since Florida State is on top of the ACC and the football world right now, we want to see where there players originated. 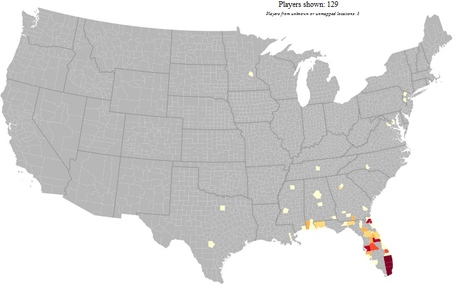 As you can see, Florida State really didn't mess around. The vast majority of their team is from the state of Florida. The 'Noles have a heavy presence down in South Florida, mid-state, and in Jacksonville. As we've seen all over the football world, those places all produce a lot of NFL talent. It is good to see that Florida State has not come into our state and hand-picked guys like they used to do a decade or so ago.

The next item I looked at was SEC recruiting and their conference map is shown below. 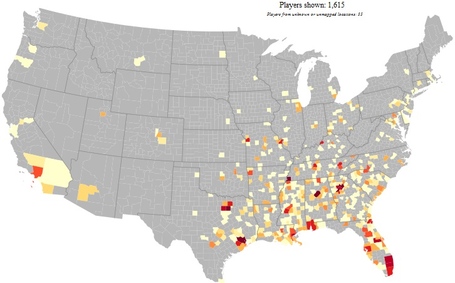 Their base, as expected, flows through the heart of Dixie with, again, a heavy dose of South Florida, some West Coast participants, and Missouri's contribution to the distribution. Of particular interest are our closest SEC schools, UGa and Carolina, whose maps are shown below. 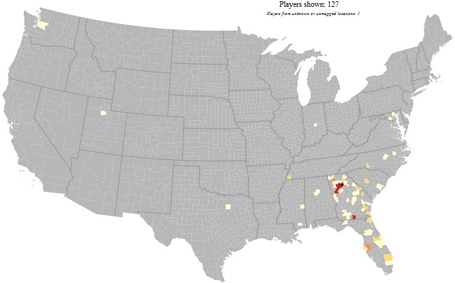 Georgia pretty much sticks to the its in-state fertile recruiting ground. The Dawgs hit the Athens to Atlanta areas pretty hard along with spots down in talent-rich South Georgia. I will admit, though, I was a bit surprised by their relative lack of presence from Florida. I expected a little more of a presence from the Jacksonville area but am happy that they don't have too many players from South Carolina though they were able to get Tramel Terry last recruiting cycle. 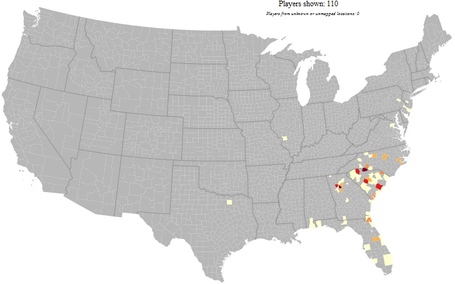 Again, South Carolina's data points are not as surprising, although I was expecting a little more expansion West because they play teams from out there every year. SCar is composed of in-state players combined with some guys around Atlanta, and a couple from North Carolina / Florida.