Clemson kicks off its home ACC schedule this weekend by hosting the Wake Forest Demon Deacons. Wake has struggled this season, suffering losses to Boston College and Louisiana-Monroe while Clemson enters this contest at 3-0 and ranked in the Top 5 of both polls. Clemson needs to avoid the sluggish start to assure that (A) they go ahead and put this game away early and (B) the Tigers can get reps for more reserves on both sides of the football.

As you can see, you may wish to mute the television during this one to avoid impulses to drink Drain-O due to the stupidity that will surely arise from this group of yahoos.  The ony thing that could make it worse would be to throw the Bachelor in the booth with this group.

Here is how, courtesy of ESPN stats, the two team's stack up statistically from a very high level perspective. 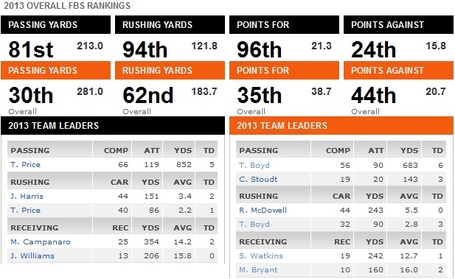 Jim Grobe is a former Virginia football player who began his coaching career as a graduate assistant in Charlottesville. He moved around for a couple of years coaching linebackers at Marshall then at Air Force. Grobe stayed at Air Force for 11 seasons before landing a head coaching job at Ohio University where was the head man at Ohio from ‘95 to '00.  At that time Coach Grobe left to take the Wake Forest job and built the Demon Deacons in a methodical fashion that is highlighted by the 2006 campaign. That team won 11 contests, an ACC crown, and made an appearance in the Orange Bowl. These achievements are incredible when one considers the state of the program when Grobe arrived and the struggles that this program endured for so long.

Grobe's mid-‘00's teams were noted for their ability to play good fundamentally on both sides of the football. Specifically, Grobe's teams were known for misdirection offenses and their offensive lines.  These were undersized yet athletic and well coached offensive lines, heavily influenced by current AF coach Troy Calhoun. You all will likely remember the trouble that our Tigers encountered dealing with pulling linemen and an unconventional and unique blocking scheme that heavily relied on cut blocks.  Over the past couple years, Wake has evolved into more of a multiple spread/pro attack that is featured at many universities.

One thing that you should notice about Grobe is his ability to get the most out of his players, winning games with lesser talent than most around him Wake will typically play very smart football.  Wake will play tough.  Wake will play good fundamental football.  That is why Grobe has been successful, and when he does get a talented player he will be sure to turn that talent into production on the football field.

Offensive Coordinator Steed Lobotzke was a player and grad assistant at the Air Force then joined Grobe' staff at Ohio in ‘97 following a tour of duty in the military. Lobotzke followed JG to Wake.  He became Wake's offensive coordinator in 2003 when Troy Calhoun left for the Denver Broncos. Clearly Lobotzke was around and was a critical part of the development and implementation of Wake's ACC Championship winning offense.  Lobotzke has since moved the Wake offense in a different direction.  The Deacons now show a  more "conventional" looks in his attack.  We will see some pro-style sets, lots of spread-type shotgun looks, and packages of plays from the pistol.  Long and short, forget most of the views you may have formed of the WF offense during the mid-00's.

Wake has an open offense and will spread it out and throw the ball around. Because of these spread formations, expect almost exclusive Nickel from Clemson outside (possibly) of goal line situations.  It's been infused with a little Air Raid. They'll run tons of mesh routes and short crossing routes designed to get the ball in space. They will motion backs and receivers similar to what you see out of our offense.  Most certainly you'll see little read plays out of the Pistol--similar to a lot of the read plays Clemson employs.  Unfortunately for the Deacs, their offense just is not good.  Their offensive line is no longer a constant thorn in Clemson's side and their overall offensive talent is simply lacking.

Their talent does lie with several players.  QB Tanner Price seems like he's been at Wake forever.  He has played well at times over the course of his career in Winston-Salem and has the skills to be a decent quarterback.  His main target is Michael Campanaro.  Campanaro has over 70 grabs in each of the past two seasons and is on pace for another 70+ reception season.  You'll likely remember he played the second half of the season with a tender hand after breaking it in the Duke game.  He was the bright spot for the Deacs offense last season against Clemson and Wake Forest clearly wanted to feed him the ball after halftime of last year's contest.  Through four games in '13, he has 25 grabs for over 350 yards and 2 TDs.  Campanaro's issue is the lack of a supporting cast.  Freshman Jonathan Williams has 13 catches for just over 200 yards.  However, I'll quickly point out that five of those catches and 140 yards were in the opener against Presbyterian.  Running the football is Josh D. Harris.  Harris averages 3.4 ypc on 44 carries this season.  The next leading rusher is QB Tanner Price.  Stop Mike Campanaro, you stop this offense--plain and simple.

Defensively, the Deacons are described as multiple and feature a variety of looks and are comfortable in both three and four man down lineman fronts.  Don't be surprised to see more 3-4 looks (well, as close to a "traditional" 3-4 as you can get given the fact that Clemson operates in its HUNH offense).  As always, we expect Wake to run another DB or two onto the field to combat the Clemson spread formations.

WF tends to be a heavily slanting front, out of multiple looks. They are one of the better stemming (pre-snap movement by DL) teams you'll see. They like to show one front, and just at the snap they will slide it one way. This is to confuse the OL's read to set the blocking scheme. Our offensive pace takes this away when its going well. However, they like to stunt and blitz from everywhere, which has caused our OL problems.  NG Nikita Whitlock is a very good football player.  He has the ability to beat a lot of good offensive linemen and Clemson will be focused on taming him all night.  You'll probably remember Whitlock whipping Dalton Freeman's ass all over the field last season.  While Freeman struggled in general against a 0-tech his whole career, Whitlock is legit and has the ability to cause havoc if Norton and the other inside linemen cannot keep him contained.  Otherwise, Wake's defensive unit should not be able to hang with anything Clemson's offense runs out on the field.

This should be another cake walk for the Tigers.  Wake is simply not a good football team--so bad that if this were not Wake, Grobe would likely be looking for a job at the end of the year.  Their schedule to date features a blowout win over PC, Boston College handling them, a close loss to LA-Monroe, and a close victory over Army.  Further study of their film shows they are very limited on offense by their line and lack of skills players.  Defensively, they have not seen an offense like Clemson's since, well, the last time they played Clemson.  This one should be over early.  I will caution, though, as Wake played CU extremely tight the last time they visited the Valley and were a real pain in Tom Bowden's side--eventually retiring him from coaching on a Thursday night.  Fortunately, things are different now which should equate to a big win that allows a lot of reserves to see the field.

We'll be watching how the Clemson secondary matches up against Mike Campanaro.  As we've mentioned before, he had a very nice second half against the Tigers last season and is Wake's only legit offensive weapon.  The key matchup on offense involves Wake's 0-technique Whitlock against our Guard/Center combinations.  Whitlock is no joke and has the ability to challenge Beasley/Norton/Shatley.  Hopefully we'll show some improvement over last season when the center is shaded/covered as we could not handle this well at all in the past.

The final item of interest is Clemson's interest.  The offense (and offensive line in general) came out flat and looked like crap last week.  The first team offensive line gave a lackadaisical effort and clearly needed a good kick in the tail.  Tajh was not crisp against the Pack and the combination of offensive line play and the QB being a little off resulted in an offensive performance we are not used to out of Chad Morris' group.  Defensively, the focus as usual will be on the linebackers and secondary in addition to overall tackling technique.  With Kellen Jones out, we'll have to rotate more players into the football game.  Let's see if some of the more hyped players can live up to the billing.  We've been concerned about the secondary for a couple years now and are particularly interested in Travis Blanks.  He has not looked as impressive as I'd like so far this year--especially filling the alley and making a form tackle.  We really need his play has to improve to get to that proverbial "next level" and the defense get back to being legit.  Tackling overall has to improve...you can never be too good of a tackling team.