It is Textile Bowl time again folks. This year’s edition has our Tigers traveling up to Raleigh for a Thursday night showdown against a very different Wolfpack team than we saw a year ago in Clemson. Gone is Tom O’Brien as the head football coach and gone is Mike Glennon as the Pack starting QB. The Pack does, however, have a history of pulling off big home upsets including defeating #3 FSU last season and demolishing a Top-10 ranked Clemson team in ’11.

Thursday, Thursday. Over the years Thursday Night ESPN football games have not been particularly kind to Pickens County's Pride. The Tigers were able finally win on Thursday last season at Wake and the 2013 schedule gives Clemson an Open Date prior to the Thursday night game at NCST. The latter should allow the staff to prepare the team as if it were any regular week and not the short week that some teams get playing the Thursday game. The Open Date is particularly important for Clemson in this case because they are the road team. A short week for a road team is much more difficult because there is travel involved to even more compress the game to game time gap.

Clemson does face a North Carolina State team that is still adapting to a new coaching staff and replacing key players from a year ago. This was never more apparent than their last football game when the Pack needed a near-50 yard fieldgoal with under a minute left in the game to go ahead 21-23. This was against the Richmond Spiders. I'll also note that Richmond was up as many as 11 in the second half and led for a large portion of the football game. Now the Spiders were ranked 15th in FBS going into that game, but it isn't exactly encouraging for State fans.

Now, I'll point back to State's history of pulling the upset. Every time NCST plays on Thursday night at home-no matter the team-they seem to always come out strong. Clemson, on the other hand, has struggled mightily on Thursday evenings. While history shouldn't influence thoughts going into the game, it is hard not to remember the past when thinking about Thursday night in Raleigh.

The schedule itself can never beat you but your opponent sure can. As mentioned in the opening, this year's NCST squad is vastly different than the team Clemson played last November. The biggest glaring difference is the addition of Dave Doeren as head football coach in Raleigh. Doeren replaces a coach we really respected (Tom O'Brien) but just could not seem to get over the hump. You kept expecting the Pack to eventually challenge for an ACC Atlantic crown but that never materialized, hence the change.

Here is how, courtesy of ESPN stats, the two team's stack up statistically from a very high level perspective. 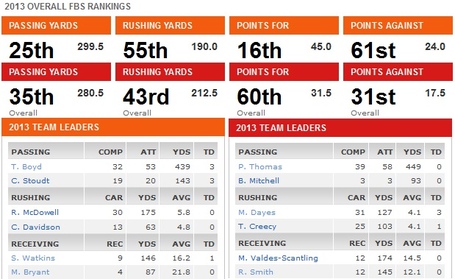 Dave Doeren played football at Drake in the early ‘90's and coached at Drake from '95 through '97. He became a grad assistant at USC before stops as an assistant at Montana, Kansas, and Wisconsin. At his last two assistant spots, Doeren achieved the position of defensive coordinator. His work for the Badgers eventually led him to the head coaching gig at Northern Illinois. In his two years at NIU, his Huskies went 11-3 in 2011 then 12-1 in 2012. You'll likely recall that the 2012 was an at-large team in that season's Orange Bowl. This is his first year with the Pack and, being a defensive football coach, we expect his first bit of order will be to find a way for the Wolfpack to play defense.

NCST will feature a 4-3 defense that has a lot of walkon and poorly rated recruits in the two-deep. As we discussed yesterday, there are a lot of "N/A's" and two stars composing this unit. While I do not think that the recruiting services should be considered the end all be all, I do think that teams are likely to be better with higher rated players on defense. After watching NC State last season and seeing the teams they have played this year, I do not think the Pack has the athletes to run with the Clemson offense. Clemson put up 63 on this team a year ago and, barring a complete failure up front, Clemson will put up a lot of points on this defense.

In mid-August, I remember seeing a quote from Dave Doeren describing his desired offense as a mesh between Oregon and Wisconsin. I am not exactly sure what that means, but it does leave a wide array of possibilities for this squad. After only playing La Tech and Richmond to this point, it is tough to get a good feel for this offense. They certainly came out of the gates swinging with 500+ yards in the opener against a very bad Louisiana Tech then followed that up with 444 total yards against Richmond. They like the direct snap out of a pistol formation with an offset upback. They'll show several unique formations and shuffle TEs, H-back style players, and the third WR throughout the football game.

We mentioned earlier that Mike Glennon was lost to the Tampa Bay Buccaneers over the offseason. The Pack chose to fill his void this week with junior Pete Thomas. Thomas, a transfer from Colorado State, gained the starting role following an injury to senior QB Brandon Mitchell in the opener. Mitchell, Thomas, and a host of NC State youngsters competed for the job throughout fall camp. It is early to comment on the quarterback play, but I'll say that his early performances have left something to be desired. On the season (against La Tech and Richmond, mind you), Thomas completed 67% of his passes for 450 yards, no touchdowns, and three interceptions. While Thomas will start, be prepared to see Bryant Shirreffs on the field for the Wolfpack. Shirreffs is the more mobile of the two QB's. I'll note that he has 70 yards and a touchdown on the ground this season on 13 carries and also accounted for a passing TD.

Freshman receiver Marquez Valdes-Scantling enters this football game as the team's leading receiver (12 catches for 174 yards) followed by senior Rashard Smith who also has 12 catches for 145 yards. No other WR even comes close to these two with RB Matt Dayes third on the team with five grabs on the season. Needless to say, stop those two and you're golden. I would like to see Clemson to continue its effort to get more physical at the corner spot. We've obviously been focusing more on jamming receivers but still need to improve dramatically in the secondary to make a significant run down the stretch.

In addition to Shirreffs running the football, the Wolfpack have two runners with over 100 yards on the season. Matt Dayes has 31 carries for 127 yards, 3 TDs and Tony Creecy 25 carries for 103 yards, 1 TD. Each has a 4+ yard average but has yet to be challenged. This will be an interesting matchup for the Tiger defense. We'll be looking to see angles taken by the linebackers and safeties crashing down on run support in particular. Hopefully Clemson's front 7 improved its gap control in the off week and Clemson (both through good run support and Clemson's offensive output) can turn this team into a one dimensional team early.

On special teams, I mentioned earlier that NC State's Niklas Sade was able to drill a very long game winning ick last week. He is 7 of 7 on the season with three field goals longer than 40 yards. Sade also handles kickoff duties so I am doubtful Clemson will get to use the speed too much in this area. We-and we being almost all Clemson fans-have lamented over the past season or so about our inability to utilize talent in the punt return game. While I'd love to see some spectacular returns, I am more focused on getting folks back there and assuring each punt is first cleanly fielded.

Overall, Clemson's talent should be too much to overcome. I've discussed Clemson's woes and NCST's triumphs on Thursday nights but just think there are way too many items going against the Pack this time. Clemson's coaches seem more focused and Clemson is simply more talented overall than it has been in years. Combine this with NCST going through learning and growing pains and I just don't see the surprise in this one. I am not saying it absolutely won't happen but hope that the week off combined with maturity by all and a decided talent advantage will be enough to bring home an victory-and an easy one at that.