Today we'll compare Clemson/NC State talent levels based on officially released two-deep depth charts. Depth charts for both teams were attained DIRECTLY from the Clemson website (www.clemsontigers.com). A pdf version of this can be found there as well. I will go ahead and tell you that because of injuries and depth chart adjustments between the release of this information and game time, some items here may be a little out of place but in an effort to maintain consistency, I'll use both teams' depth charts as presented on the official website. 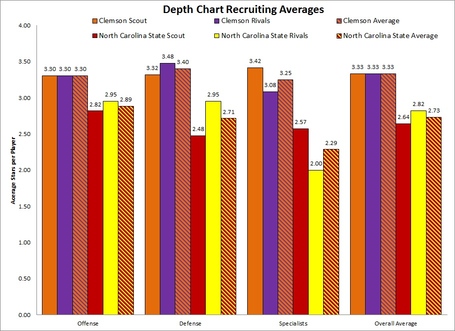 I'll note that while pulling these data together, I noticed a lot of players who were not Rivals/Scout rated. NCST has quite a few walk-ons and players who were not rated coming out of high school on the two-deep. Keep these guys in mind while watching the football game Thursday night.