We are back at it for 2013. That means assessing our opponents' talent level via two-deep assessment using Rivals/Scout ratings as assessment tool.depth charts for both teams were attained DIRECTLY from the Clemson website (www.clemsontigers.com). A pdf version of this can be found there as well. I will go ahead and tell you that because of injuries and depth chart adjustments between the release of this information and game time, some items here may be a little out of place but in an effort to maintain consistency, I'll use both teams' depth charts as presented on the official website.

Figure 1 and Table I both show an average of offensive players, defensive players, and specialist listed on the two-deep roster. Tables II through IV show the two-deep roster used for analysis along with the recruiting ratings for each player on the roster. As you will see below, Georgia has done an excellent job on the recruiting trail in the talent-rich Southeast and has out-recruited Clemson overall in terms of two deep depth. If you've followed our discussions over the summer on this topic, you probably won't be surprised at how this data shakes out. 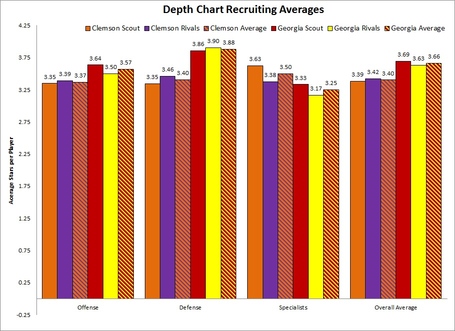