Evaluating the 2009-2013 Non-ACC Recruiting Classes Around the Southeast

Share All sharing options for: Evaluating the 2009-2013 Non-ACC Recruiting Classes Around the Southeast

This comparison examines how Clemson stacks up to these teams from 2009 through the 2013 recruiting cycle. As always, data was attained from www.rivals.com and www.scout.com. Also, I’ll encourage you to view my conclusions then be sure to go out, do some research and come back with your own points and counterpoints.

All non-Clemson schools averaged over 23 players per class compared to CU’s 21.6. I need to point out that the small 2009 class really brought this average down. Georgia averaged approximately 23 and ½ players per class including last cycles’ staggering 33 man class. Otherwise, it was approximately 25 per class or more for each of the remaining teams. Looking at the big boys (Bama and LSU in particular), you realize that big boy roster management is in play. I believe that Carolina was able to pull off its extremely large ’11 class through a combination of methods. I’ll point out that I do not support signing players just to sign players (i.e., quality is a must) but these teams aren’t just handing out scholarships. You can bet your tail as well that these teams are very, very careful about awarding walkon scholarships because, as you see, their roster management and recruiting strategy puts a premium on a football athletic scholarship. Essentially, produce or move on. 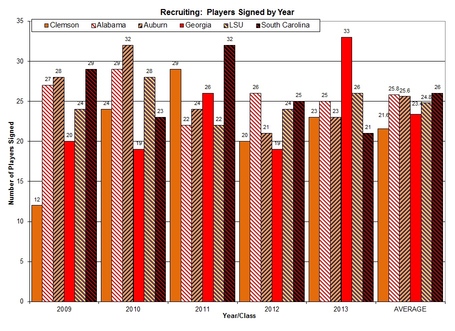 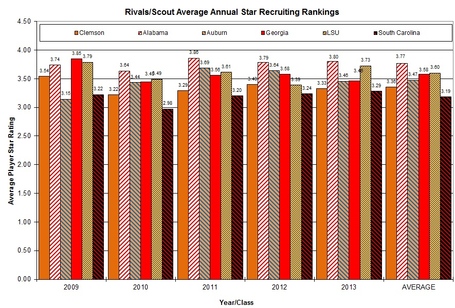 These results are not unexpected. WE compared Clemson to teams that have been successful to get a measuring stick next to our Tigers and it is clear that Bama, Auburn, LSU, and UGa have outrecruited Clemson over the past 5 cycles. That really is no knock on Clemson as the numbers seen above—with the exception of the small ’09 class attributed to unusual circumstances—indicate Clemson pulls quality talent in decent numbers…just not LSU/Bama numbers. It also shows where Clemson sits compared to in state competitor Scar. From the information gathered above, Clemson led SC by an average of 0.17 stars per player over the course of this data set. All in all, I believe when you combine the class size with the star per player metric, the two are very close in recruiting success though I would, based solely on the quantitative analysis above, say that Clemson does have a slight edge overall.