Share All sharing options for: A Look Back: Clemson / UGa 1986

With our Tigers facing off against the Georgia Bulldogs this season, we thought it fitting to go back and look at some of the classic victories for CU in this series. Today, I’ve decided to rewatch the ’86 game and provide commentary as such.

Clemson came into this football game on shaky ground. The ’85 season was less than stellar as Clemson finished with a 6-6 record that included an Independence Bowl loss to cap the season. Even more worrisome was a poor outing to open the season against Virginia Tech. Georgia was the second game in the 1986 campaign and looked, from the outside, to be the favored team in this game. What ensued goes down in Clemson lore and, like the UGa game back in 1981, was the confidence builder that Clemson needed to thrust itself into the national spotlight as a legit team. No question, this game kicked off Clemson’s effort to prove to the country that the Tigers were back and indeed could win a conference championship and play with anyone out there.

Clemson featured a good defense that was anchored by a very good front four. The Clemson offense was primed to push Kenny Flowers into the Heisman chase. Flowers entered this game needing fewer than 200 yards to become the school’s all-time leading rusher. You’ll probably recall that Flowers was timed at 4.34 seconds in the 40 yard dash—he could flat out fly. Clemson also had another excellent running back in Terrance Flagler. These two, combined with Tray Johnson, provided quite a punch in the backfield. Though Rodney Williams did play a lot in the ’85 campaign, there were questions about his accuracy in the passing game. The sophomore struggled a bit against VPI the previous week and had a relatively tough ’85 campaign in terms of completion percentage. We all know now that Rodney’s ability to make excellent decisions, run the option, and provide leadership would win Clemson a ton of games…but there were some questions back in the day. If memory serves me correctly, Williams was backed up by senior Kenny Anderson during the ’86 campaign.

This football game started out with Clemson receiving and both defenses forcing the opposition to punt on its first possession. Unfortunately for Clemson, James Lott fumbled the UGa punt, giving Georgia excellent field position inside the Clemson 30 yard line. The Dawgs quickly drove down to the Clemson goalline where they were able to punch it in on 4th down to take the early lead. Clemson’s next possession featured a 56 yard scamper by Kenny Flowers to put the Tigers inside the Georgia 5 yard line.

Flowers finished off the drive to leave the two teams tied midway through the first quarter. Georgia responded on their next possession with a nice kick return. Several plays later, the Dawgs caught Clemson sleeping in the passing game, scoring on a 32 yard pass. This was a slick little play that saw the fullback sneak out of the backfield into a wheel-like route down the sidelines for an easy 6 points.

Tracy Johnson immediately fumbled the football on the ensuing drive, giving Clemson two fumbles in the opening quarter. This is definitely not the fundamental soundness we expect out of a Danny Ford-coached team to this point and Georgia again had the ball deep in Tiger territory. Clemson, aided by a critical clipping call, forced a Georgia 50 yard field goal that missed wide right. Clemson, which struggled mightily through the air. However, these struggles (as shown in the clip below) did actually help the Tigers during the first drive of the second quarter.

Clemson was able to capitalize on Georgia’s INT turned 20 yard gain on the fumble as Rodney connected with Terrance Flagler for a 10 yard TD to tie the contest at 14. Georgia responded immediately with a balanced drive that culminated in James Jackson keeping the football on the option to take a 21-14 lead in the second period. Clemson, then came right back largely on the arm of Rodney Williams. I will note that there was a play in this series in which Clemson was very fortunate a ball tipped into the air fortunately fell into a downfield Clemson receiver’s arms. The big play on the drive was the 3rd down conversion via a dump to the tight end deep into Georgia territory. This game quickly turned into a back and forth track meet. I will note that Kenny Flowers did leave the game at this point with a mild ankle sprain…meaning Flagler would be the featured back for the rest of the contest.

The Tigers did stop UGa but committed a critical roughing the kicker on the 4th down punt that would have given our Tigers the ball in great field position with approximately 2 minutes left in the half. Instead, the teams went into half tied at 21.

Halftime statistics are shown below courtesy of a youtube screenshot. Clemson’s weapon of choice was on the ground and UGa moved the ball pretty well through the air. Not shown here is the missed opportunity Georgia had that was foiled by a clip then missed long field goal. Overall, though, the statistics pretty well mirror the evenness of the game so far (with the two extra Clemson turnovers negating the advantage in total yards). 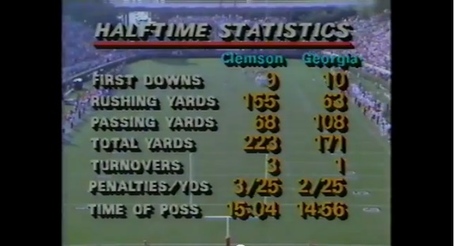 Georgia opened the game going three and out. Clemson was able to drive down inside the UGa 10 yard line before a Williams fumble at the 9 yard line gave the bulldogs the football back. While this drive ended with a terrible turnover, Clemson was impressive throwing the ball—particularly on the two plays shown in the clip below.

Georgia was able to get the ball out to its own 35 yard line before they fumbled the football. Clemson punched it into the endzone on a Williams sneak, but the majority of the work to get the 6 was done via Terrance Flagler’s ability to run and the big play is shown below. Clemson now leads 28-21.

Clemson then forced an interception on the ensuing series. Things really appeared to be going Clemson’s way at this juncture. The Tigers just forced a turnover and were sitting pretty at the UGa 25 yard line. Clemson then went for the jugular and came up short as Rodney had yet another pass picked off around the 5 yard line…sending the Tiger defense immediately back onto the field.

It was extremely unfortunate that Clemson couldn’t capitalize there. Not only were the Tigers unable to extend their lead, they also lost momentum by giving the ball right back to the dawgs. Georgia quickly took advantage, scoring on a 78 yard reception by Freddy Lane. The Clemson defense bit on the dive fake, leaving Lane wide open sprinting down the sidelines. I’ll point out that Donnell Woolford was shaken up on the previous play. This tied the game at 28 deep in the 3rd quarter with a critical Clemson mistake and a big Georgia play keeping this one close headed into the final period.

Clemson again drove the ball well on the next drive. Williams had a couple big keepers and a sneak to successfully convert a 4th and inches at the UGa 40. Clemson again got in 4th and short and again was able to convert—this time running Johnson. Clemson eventually gets the ball down to the 23 yard line of the bulldogs, setting up an unsuccessful David Treadwell kick that missed to the right. The kick was 39 yards and it was Treadwell’s first career miss from a distance between 30 and 39 yards. The Dawgs then ran it down the field, getting to the 15 yard line before Clemson forced the UGa signal-caller to fumble on an option keeper. This gave the Tigers the football at the Georgia 10 yard line with about 4 minutes left in the 4th quarter.

Clemson was able to move the ball well following the turnover. A very nice pitch and catch to Flagler then a nice carry by the back got the Tigers out to midfield. Unfortunately, a Terrance Roulhac reverse was stopped for a loss, then a Williams keeper was stymied for a loss, then the third down pass fell incomplete. I’ll note that Danny loved to get somewhere around midfield and try that WR reverse, especially with the speed he had at the receiver position during the mid/late ‘80’s. A punt gave the Bulldogs the football at the 20 with about 2:00 left. Georgia follows with an incompletion, a carry for 6, then another incompletion, forcing a Georgia punt with 1:21 on the game clock.

Clemson got the ball back on its own 35 with 1:11 remaining. Coach Ford stayed patient, first optioning to Flagler for no gain then handing off to Flagler for a 15 yard carry. The next play was an option keeper by Rodney that went for another 15 AND Williams got out of bounds. 53 seconds left…Lancaster on the dive and Clemson is at the UGa 31. The give is to Flagler between the tackles. Ford calls a timeout with 4 seconds left. You’ll notice that Danny was intently focused on clock management. That was one thing that Coach Ford did well was he understood the situation and exactly what was going on and how many timeouts were remaining. He also stayed calm in these situations…never jumping up and down acting a fool. Following a Georgia timeout, IT IS GOOD! 46 yards out and Treadwell is money. Tigers win 31-28.

Watching that game never gets old. Beating Georgia is what you always want to do. It always is a bit disappointing and shocking that Clemson committed five turnovers on the afternoon. I’ll admit that Rodney looked shaky at times but was always poised. The two interceptions were just poorly underthrown balls. The pass he made out of his own endzone late in the football game was very impressive. What is also impressive is the pure amount of talent Clemson had on some of those teams. The fact that your featured back and eventual school rushing leader gets hurt and you plug in another back (Flagler was an All-American in 1986, by the way) and don’t miss a step—that is something else.

The patience showed by Coach Ford at the end of the game really was impressive. The announcers did not like the playcalling but in the end, Ford and his assistants showed that they knew exactly what they were doing. The announcers were critical of conservative playcalling to set up a missed field goal in the second half. They were critical of Clemson’s decision to run the football late in the game that caused the Tigers to punt with approx. 2 minutes left. In the end, though, it was Ford understanding the potential of Flagler and his option offense picking up critical yards. It was also Ford and his staff who were confident enough in Williams, though he had thrown interceptions earlier in the game, to put the ball in the air coming out of his own endzone. Finally, at the end of the football game, either Clemson was going to win or no one was going to win.

Again, this was a huge win for the Clemson program. This was the win that Clemson built upon on the road to an ACC crown. Sure this was a non-ACC game but it built confidence following a rough loss the previous week. It also proved to Clemson that they could go out and play with some of the country’s best teams. Winning late and simply finding a way to win does nothing but good for your team.

Complete game courtesy of youtube member "tigerray" is below.