There is fairly standard agreement with the premise that a fast-paced, uptempo, "Hurry-Up-No-Huddle" (HUNH) offense puts a ton of pressure and strain on an opposing defense. But, we've also all heard the commentary from fans and media, and even defensive coordinators, that a HUNH offense places undue strain on that teams' defensive unit, as well. This is part 1 of a series of posts designed to explore and attempt to prove or disprove that hypothesis through a data driven approach.

Share All sharing options for: HUNH Offense--Macro Analysis on Impact to Defenses

This topic is especially near and dear to the hearts of Clemson fans as we've seen some less than desirable results out of the Tiger defense the past two seasons, while the Clemson offense has morphed into an up-tempo scoring machine. Question is...what is contributing to a less than stellar defense? Is it scheme, personnel, coaching techniques, recruiting focus? Or, is the defensive unit simply a victim of the offensive philosophy?

First, you have to identify which offenses should be considered "HUNH" using data collected, by team, from 2007-2012. After several iterations of looking at things like points per game, points per possession, possessions per game, plays per game and determining that all were flawed, the final method was determined. You have to take, to some degree, the success of a HUNH out of the equation and even the quality of a defense out of the equation (i.e. a defense that gets a lot of 3 and outs, may drive a team to run a lot of plays or have a lot of possessions).

However, teams that run a lot of plays relative to the amount of time they possess the ball, are more likely to be a designed HUNH offense. See the table below, which has some summary statistics on "Plays per Minute of Possession" for all FBS teams:

Notice a couple of things from the this high level data. Recall that after the 2007 season there were rule changes put in place that were intended to reduce the length of games. Only in 2012 have we seen the mean plays per minute get back near the 2007 levels. Also, look at the max plays per minute in 2012--Houston ran, on average, 3.3 plays per minute of possession.

From 2007-2010, only 3 teams had ever averaged over 3 plays per minute (Houston in 2009 and 2011 and Middle Tennessee in 2011). However, in 2011, there were 5 and in 2012 there were 8. The perception is certainly that more teams are moving to faster-paced offenses and that those offenses are getting faster each year. The data would certainly support that, in this case, perception truly is reality, as we've seen the number of teams above 2.6 plays per minute go from 11 to 14 to 21 to 32 from 2009 to this past season. See below for graphical view.

Back to the task at hand--categorizing the teams into tempo. Four categories were created:

Next, is to figure out which defensive stats should be used to determine how and if a HUNH offense negatively impacts defensive performance. There is a tremendous amount of data easily available at the team level to use for this purpose, but there are a few categories that are typically used to define the best defenses in the nation: Points Allowed per game and Yardage allowed per game. Table below shows that data by category. 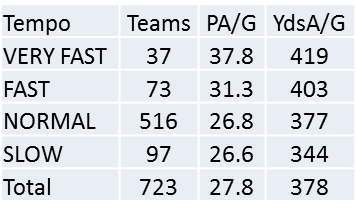 Those two stats certainly show a fairly dramatic difference between the tempos--nearly 5 more points per game allowed for fast compared to normal and an additional 6 points for a very fast offense. Similar increases can be seen in Yards allowed as well. But, what does this tell us? Does this really mean that if you run a HUNH your defense will suffer? Or, are we simply looking at the wrong stats?

This leads to digging one level deeper--stats that help account for variances in opportunities to give up points and potentially provides a fairer comparison.

These stats paint a very different picture--almost no difference between the normal, fast and very fast defenses in terms of per play or per possession points and yards. The only real distinction occurs between the 'slow' or ball control offenses and the rest.

What is the logical conclusion here? Perhaps, said differently....is there a logical conclusion here? My take on this is fairly simple--based on the data, having a HUNH does NOT put undue pressure on a defense in the manner that is most often discussed. That is, a HUNH offense requires a defensive unit to be on the field too much, causing fatigue in a game and over the course of a season, thereby causing the unit to under perform.

However, clearly, over the course of a season, a HUNH offense certainly impacts defensive performance in terms of the standard national ranking stats. But, it's not because they are fatigued...or over tired...or over worked. Or, even that HUNH teams skew recruiting toward offensive talent.

Rather, it is due to the very reason that offensive coaches like Chad Morris like to run a HUNH system...all else being equal, if you get more at-bats, then you should be able to score more runs. Defensive units on teams with HUNH offenses, have to face more plays and more possessions--and because of that, in aggregate, they give up more yards and points.

Which leads to the next question, and part 2 of this series...is it worth it?