Evaluating the 2013 Non-ACC Recruiting Classes Around the Southeast

Share All sharing options for: Evaluating the 2013 Non-ACC Recruiting Classes Around the Southeast

We examined how Clemson’s 2013 recruiting class compares to others around the ACC already and now we want to look at some of the other big time football schools in the Southeast and, as it plays out, all these schools are from the Southeastern Conference. We chose schools that we have played recently and/or are National Champion caliber teams to try and see just how our class stacked up against these schools. Per usual, we wanted purely quantitative data and, thus, chose to use the rankings/information gathered by the industry "experts," www.scout.com and www.rivals.com. As always, don’t take my conclusions nor just the data as the end all be all…we encourage everyone to go out, do their own evaluation, and share their opinions here in the comments section.

We’ve repeatedly discussed the importance of roster management. The information shown below indicates that the teams in this data set are more hard-lined in this area. They assure they bring in the maximum number of players and do more "roster pruning" than other teams we’ve reviewed to date. Many of these teams also had a lot of top talent prior to this class and are filling spots for guys who have left for the professional ranks. I’ll note that there is also attrition due to other items (discipline, need to transfer, injury, etc…) as well, though don’t think it is a coincidence that these schools make sure their class is filled. 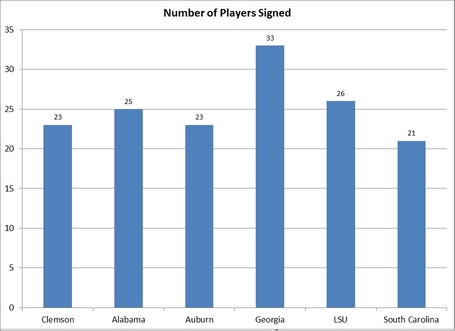 You’ll notice that four of the five teams signed as many players or more than Clemson (23). Bama and LSU pulled 25 and 26, respectively. Georgia, through some extremely creative roster management involving just about every trick in the book, brought in a ridiculous 33 players following the conclusion of the 2012 football season. While Clemson’s numbers are only greater than SC’s, I think that we did a good job pushing the 25 limit though I would not mind us pulling player after player like some of these guys.

Star rating showed Clemson in about the same boat. Our Tigers, at an average 3.33 stars per player, nipped Carolina but trailed the rest. Georgia and Auburn were the middle teams (3.46 stars per player for both) and perennial recruiting powers Alabama and LSU were the clear cream of the crop. I’ll note that Bama was nearly a half star per player better than Clemson and LSU piled in 3.70+ stars per player…very impressive. 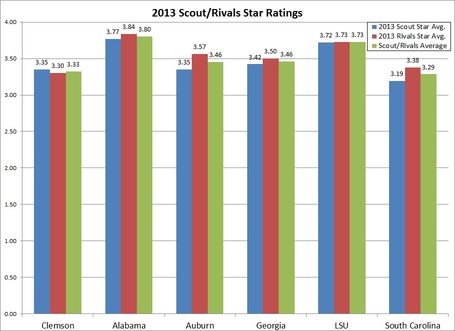 Overall, I believe a fair assessment is that Clemson and South Carolina are about equal—though based on the pure quantitative items above Clemson does get the nod due to the bigger class with a slightly higher star per player average. Auburn (equal players, more stars) was a bit better than our Tigers. The other three schools had monster years attracting talent in large numbers. You expect this annually out of Bama and LSU but you really must tip your hat to UGa. They had a scenario that worked out really well for them numbers-wise. They were also able to ride the wave that follows an SEC-Championship Game season and pulled lots of players with a whole lot of talent last cycle.