We examined how Clemson compares to its ACC foes as well as other Southeastern schools on the recruiting trail earlier this summer. Today we want to discuss a topic that has been mentioned by several readers' comments as well as our own questioning thoughts: Notre Dame and Louisville. Obviously neither are in our conference today but Louisville will replace Maryland next season and Notre Dame signed a strategic agreement with the ACC-meaning we will see them on our schedule in the not so distant future.

As always, we cede to the recruiting "experts" over at www.rivals.com and www.scout.com to attain all data used in this article. We also encourage you to go out and form your own opinions and come back and share. In the past we've split 2013 and 2009 through 2013 data into two separate articles. With just three total teams to look at here, I think it is best and simplest to tackle both items here.

Per typical, we will begin by digesting the class sizes of each of these schools and Clemson. 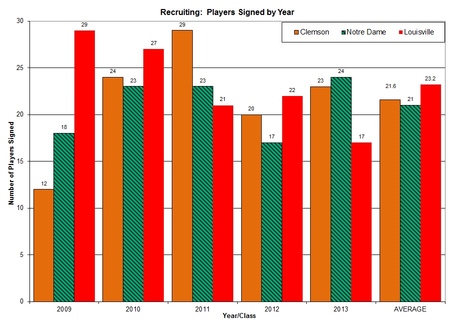 Louisville started this dataset with a bang, bringing in 29 players in the '09 cycle and 27 in the '10 cycle. They then tapered their signing levels to end with just over 23 players per class for this five cycle period. This was highest of the group for this period but was front-loaded with big early numbers. You probably notice this past cycle the Cardinals signed fewer players than both Clemson and Notre Dame. My thoughts on this are simple, Louisville was trying to build early in this cycle and, consequently, were not able to pull the better talent and had to take chances on more players. The combination of the two forced larger classes. As Charlie Strong has been more and more successful they now have the ability to become a little more choosy in who they recruit and/or sign.

Notre Dame was consistently in the 17-24 range each year over this data set. The Irish in '13 brought in one more player than our Tigers and led the three teams with 24 players signed in this past recruiting cycle. I suspect that, even though there were changes in leadership over this time period, the fact that Notre Dame is a national brand and does recruit from coast to coast they have been fortunate with fairly stable numbers. They also are considered an elite overall program/tradition by many and use this to their advantage to maintain relative stability through recruiting.

Clemson obviously had a rocky season prior to the '09 campaign that included a change in leadership. These circumstances contributed to the small '09 class and drove the larger classes seen in '10 and especially '11. Clemson ended with an average class size of 21.6--slightly higher than ND's average but well below the UL average of 23.2 players per class.

Star rating should give us an idea of the quality of the class. Again, we looked to the "experts" to help us quantify these classes. I've often heard of star bias for Notre Dame but will only recognize that concept and will comment no further than to say that we've used the opinions of those at Rivals / Scout exclusively to this point in these discussions and will remain consistent throughout. Comment on that strategy as you will.

From the data shown below that Notre Dame pulls more stars than our Tigers and Louisville spent the five year period trying to catch the two. 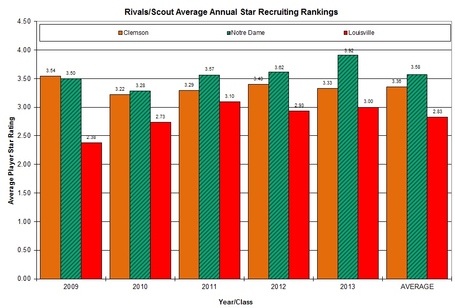 I will point out that Clemson was steadily averaging between (approximately) three and a quarter and three and a half stars per player. Clemson led this group in stars per player only once--in the small '09 class. Notre Dame, after taking a small step back in this area from the '09 to '10 class, has been on a steady upswing the past three years. This culminated in a stellar 3.92 stars per player class for '13. Clearly getting to the MNC game last season helped on the recruiting trail. The Irish also led the overall average statistic by 0.22 stars per player over our Tigers.

Louisville consistently trailed both schools but showed a very positive trend over the course of this data set. The Cardinals started at a dismal 2.38 stars per player but were around 3.00 stars per player in each of the last three years of this analysis. These factors kept them at a 2.83 average number, well below the other two but trending upward.

Overall, it appears as though through higher player quality and steady class sizes that Notre Dame fared better on the trail than both Clemson and UL from '09 through '13. The Irish success last season made them the clear winner for the '13 class. Clemson does look to be quite a bit ahead of Louisville based on the numbers above. Both Louisville and Notre Dame have improved over the course of this time period signing players while Clemson has been consistent in bringing in good classes annually--even when you consider the anomaly of the '09 cycle.