We discussed the 2013 Atlantic Division recruiting cycle earlier. Now we will shift the discussion to Clemson's performance this past cycle compared to Coastal Division foes. Again, I'll point out that we used the "expert's" data (www.scout.com and www.rivals.com). We encourage you to go out and develop opinions of your own via film study/other research and comment about the validity of these data and the analysis.

Per usual, we'll start with class size. Obviously the number of players brought in is a function of various factors and roster management strategies. Small classes are typically indicative of few available scholarships and/or inability of the school to recruit many players of necessary quality for the team. There are clearly unique cases like the small 2009 Clemson cycle whose size was influenced by a turbulent season and coaching dismissal. The other end of the spectrum-the large class-is possible when a lot of scholarships are available, many players will enroll early, or coaches expect a many non-qualifiers in a particular class. As you can see, cycle size is important and a product of many, many decisions within a coaching staff. 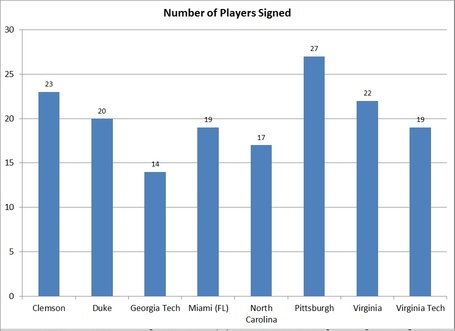 When compared to Clemson (23 players this class), only new member Pitt brought in more players (27). Ga Tech brought in 14 and UNC 17. Every other school was somewhere between 19 and 22 players this cycle.

The other piece of the puzzle is the quality of the player. Here is where I'll rely on the Rivals and Scout star ratings to quantify the quality of each class. As you can see below, the Coastal recruited much more competitively with our Tigers as a group than the Atlantic. 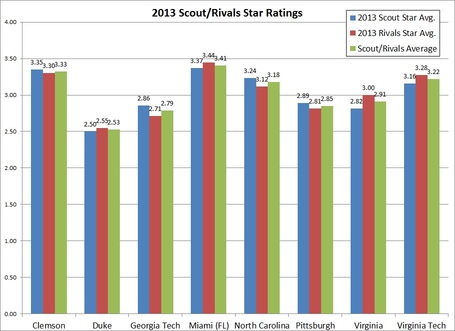 Overall, I would argue that Clemson out-recruited each of its Coastal foes when you consider both quantity and quality. Miami, with 19 players signed and 3.4+ star per player average, looks to be a very close second. The division as a whole appears much closer to our Tigers than the Atlantic which, you'll recall, was essentially a two-horse recruiting race between Clemson and FSU. I'd say that all Coastal classes, sans Duke and possibly GT, were respectable. If this trend continues we surely will see more competition for the Conference Crown from teams on the other side.