We need to look at the recruiting trends over the past few cycles to see where Clemson fits in with its Coastal Division brethren. For this exercise, we’ll look at the 2009 through the 2013 cycles to capture true freshmen through this season’s redshirt seniors. Obviously, things can happen between each player’s signing day and today but the items below should show overall recruiting trends and data to give a starting point for discussion. As always, we encourage you to go out, form your own opinions, then come back and discuss your thoughts on all these matters. I’ll also point out that data shown below were obtained from the recruiting "experts" (www.scout.com and www.rivals.com) so that we had an independent qualitative measure to discuss here for all teams in the Coastal Division.

I’ll apologize in advance for the clutter within each chart. I want to show a lot of data in one spot and hope that you can digest the various colors associated with eight teams and six data sets for each team. I am including the raw data below each chart to allow for better understanding of the data.

Class size is, as we’ve mentioned here over and over again, a function of roster management. Assuming a staff has been in place for a while, you can find patterns through these numbers and can make inferences on the management strategies. There are obvious disruptions (players leaving school prior to graduation for various reasons, oversigning, etc…) that can affect these numbers. Enough of the prep and on to the good stuff.

Here are the yearly numbers for each Coastal team plus Clemson. 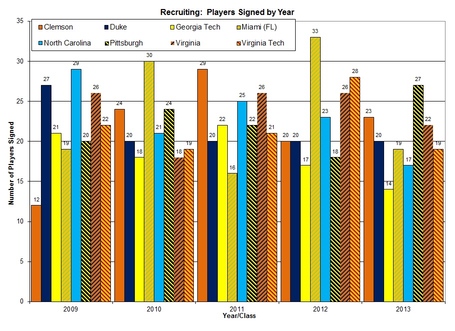 Now we’ll point to the overall average numbers, followed by the raw data. 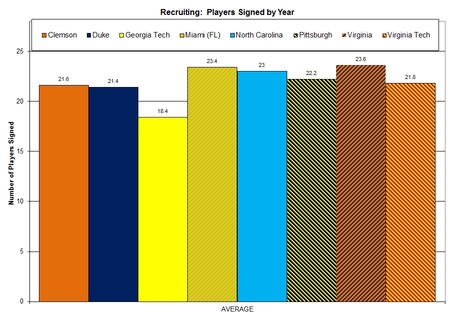 Miami and Virginia lead the pack in terms of class size average. You’ll note that Miami had two classes featuring 30 or more players. Virginia had three classes that consisted of 26 players. Clemson’s average of 21.6 players per class is more than only Duke and GT. I will, as always, point out that the 12 person 2009 class was an anomaly caused by staff turmoil and likely played a big part in bringing Clemson’s average down.

The quality aspect is always a tough one to quantify. We’ve again chosen to utilize www.scout.com and www.rivals.com data to help quantitatively assess player quality for each team’s class. This information is shown below. Clemson led all Coastal members in terms of average stars per player over the time period. Do notice that Miami, UNC, and VPI each averaged over 3 stars per player over the course of this time period and all members of this division except Duke averaged over 2.8 stars per player from ’09 through ’13. The real team to take note of here is UVa. He Wahoos have improved dramatically the past three cycles and are making a push to sit in the 2.9 to 3.0 stars per player range instead of the 2.67 rating we saw out of the Cavaliers in early data.

Here we have the yearly numbers. 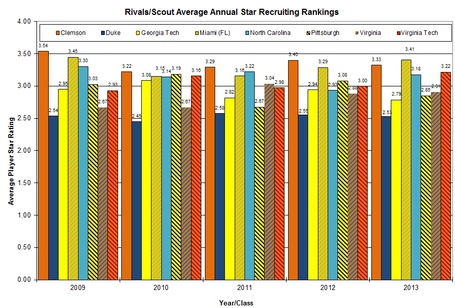 And the overall average followed by raw data. 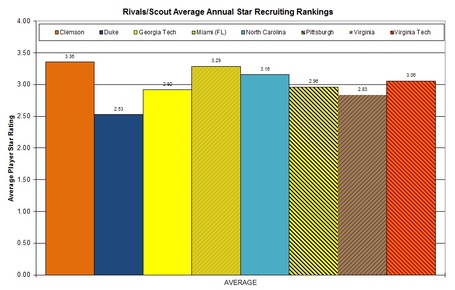 While Clemson has out-recruited this division over the course of this data period, teams like Miami, North Carolina, and Virginia Tech are continually hanging close to Clemson’s star per player average. This is a stark contrast to the Atlantic where FSU and Clemson have dominated the rest of the conference in recruiting (with FSU leading Clemson here).

Overall, Clemson looks to have the best overall recruiting package of the folks shown above. The Coastal does, however, present much closer competition than the Atlantic where FSU and Clemson rule the roost. The Coastal features UNC, Miami, and VPI who have consistently brought in talent and Virginia that has improved over the years.