Please remember that Monday is not simply a day off of work. Monday is a day to thank every current military member and thank all the veterans for their work. Without these brave men and women, we would not be free. STS says thank you, we appreciate the sacrifice made so that we can do what we do.

This week’s main Clemson topic is easy. We’ll discuss the stupidity of the ACC Baseball tournament. Fortunately, this is the final year of Round Robin Stupidity…like most everything up there, it took seven freaking years for Swofford to realize the absolute stupidity of the tourney set up. The teams already have a Round Robin tournament, you idiot. It is called the ACC regular season. The fact that one team is eliminated following the first game is ridiculous. That is not a tournament. This is not little league—every team doesn’t need to play. The only bright spot about the current system is it does allow all teams to play…therefore, in theory, you could improve RPI. I have been screaming for years that we need a simple double elimination tournament—and you can argue how many teams are invited.

Otherwise, we (STS) have been challenged by our site supervisors to start an STS store. We have been identified, again, as a top shelf site who probably needs a store. We are currently open for T-Shirt designs…obviously if you have any ideas, let us know. If you have a sweet ass shirt idea, I’ll buy one for you and for me. My first shot at developing a t-shirt involved vulgarity. I toned it down to just a picture of David Treadwell pissing on the Georgia pooch. Again, probably not acceptable for corporate.

This is not what we are shooting for: 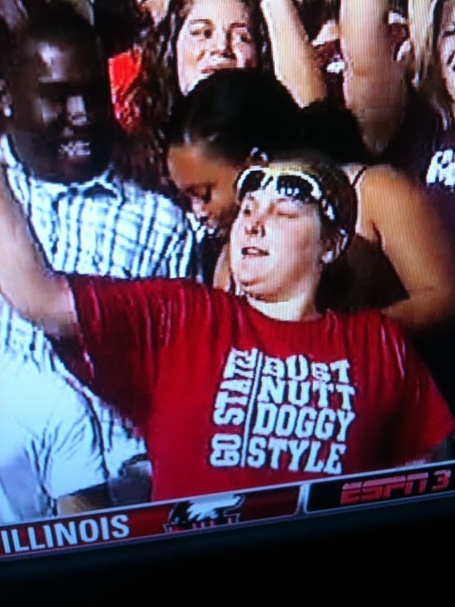 This is what we typically get from those assclowns in Columbia

Again, this is a question I’ve never asked—just assumed—do you want an STS store? Would anyone buy badass FigureFour or Dr B merchandise? If so, the first item I recommend is the IDGAF koozie. We will avoid discussing smelly cocks. Once you realize that you don’t care what the mass media or the idiots over at Tigernet think, you start researching players and research the game. That is what we want…very smart football folks to discuss what is going on…period (sorry about ending that sentence with a preposition).

Now we are on to the thing that matter...will Clemson host? I think they deserve to host based on their lat-season play. Carolina? no they have not done a damn thing in SEC play. I think Clemson hosts and those jackasses don't. This does not mean that I still have confidence in Jack...though we should be loaded next season.

I really wanted to kick off my Panic series today, but the death of Ray Manzarek I'll begin with Rock Legends and close with more Panic.

And your PANIC fill

Let u know (a) your t-shirt ideas

(b) your Doors favorites