We like to at least give some attention to recruiting statistics and simply present the information with some commentary. Today, we’ll look at 2013 recruiting items around the ACC Atlantic. I’ll begin by pointing out that these are simply numbers and the "star rating" is the evaluation of the so-called experts. All data were taken directly from either www.rivals.com or www.scout.com. Take these opinions/ratings as you will…they are the only method for us to quantitatively evaluate classes and individuals across a wide-array of teams and regions. As always, we encourage you to go out and research players’ and teams’ video to develop opinions of your own. Let us know your opinion on how the quantitative data compares to the qualitative observations you make in your research.

We’ll first look at class size. Obviously, class size is a function of recruiting strategy, roster management, and circumstances surrounding players prior to/after their arrivals on campus. Gray/Red-shirting, qualification status, player dismissal, available talent, team needs, and more drive class size and drive these numbers. I won’t get into the in’s and out’s of roster management here but rest assured we have and will continue to comment on this area because it is an extremely important aspect of building a solid program.

In 2013, the signee numbers broke down as follows: 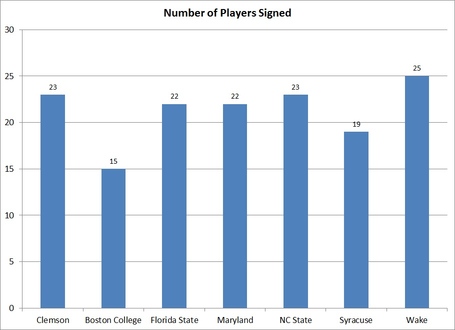 You’ll notice all teams in the division sans 'Cuse and BC signed 22 or more this cycle. Wake's 25 led the Division with Clemson and NCST both signing 23 players.

The other side of the class evaluation coin is player quality. As stated before, the most objective method of evaluating incoming talent we could identify was looking to the national analysts for guidance. This methodology has its flaws but we chose to use it as our starting point. Here is how, on an average star per player basis, the professionals have these classes. 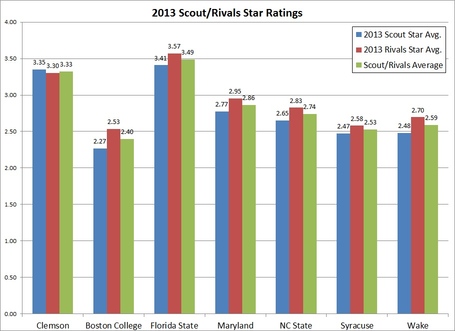 Looking at pure data, FSU had this cycle's best overall class. Clemson was next followed by Maryland's 2013 pull. Based on past performances on both the recruiting trail and on the football field, this end conclusion is not very shocking. Without some major shakeup or change, I suspect this will be the case some time in the near future.