As all of you know by now, Clemson baseball has completed its regular season. The Tigers were able to mature over the course of the year to heat up down the stretch. In fact, Clemson held its own destiny in the Division heading into the Thursday-Saturday weekend series down in Tallahassee--needing to sweep the series to win the Atlantic on its own or win 2/3 and get some help from the Wolfpack who played Duke. As everyone witnessed, it did not go well for the Tigers. After a big win on Thursday, the bats went away Friday then Clemson left a ton of runners on bas in the Saturday afternoon finale. To top it all off, NCST was able to sweep its series (thanks to a Friday Duke collapse), so Clemson would have needed a sweep to win the Division. When it is all said and done, FSU wins the Atlantic again and definitely deserved it following series wins over NCST and CU. Hopefully Clemson will get over this loss and will move forward. This series had a lot of promise but Clemson could not get the bats going Friday and even worse pissed away their chances Saturday. The Tigers will gear up for conference tournament play this week and await a Regional selection from the committee soon after.

Clemson golf started the Tempe Regional well in fourth place following the opening round. The Tigers, however, struggled on Day 2 and fell way off the pace down to 12th spot entering Saturday's final round. Billy Kinnerly extended his streak of rounds in the 60's on Friday to four, carding a 69 for the second round. The rest of the team was, well, not so good and finished a combined +15 leaving Clemson in a very tough situation. Kinnerly again shot a 69 on Saturday--easily the best of the team. The Tigers finished in 12th place and are done for the year following that performance.

This was a tough week for a couple of sports legends from the track to the fairway. Legendary golfer and CBS announcer Ken Venturi passed away at the age of 82. Venturi won 14 Tour events including the 1964 US Open. In that Open at Congressional--which featured 36 holes on Saturday afternoon to decide the winner--Venturi was advised by doctors not to play his second Saturday round as he was severely dehydrated and many had concern that he would have a heat stroke on the course. Venturi paid no attention and pressed on--nearly passing out on the course and having hallucinations at the end of his final round. Nonetheless, KV pressed on and carded a 70 to win the Championship by four strokes. You'll also recall Venturi nearly won the Masters on several occasions--once as an amateur. Most, though, will recall his work on CBS commentating the game--a position he held following his retirement from full time play on the Tour in '67 until 2002. Thanks for the excellent work with CBD, Ken.

In the spirit of Venturi and amateur golf, I will recommend Mark Frost's The Match. This book details a bet and a golf match between two amateurs (Venturi and Harvey Ward) against two of golf's greatest legends (Hogan and Nelson).

Short-track star and former NASCAR/ESPN-Sportscenter favorite Dick Trickle passed away from an apparent self-inflicted gunshot wound at age 71. Trickle is noted as the most successful short-track driver ever, winning many, many events across his home state of Wisconsin prior to becoming a national name through various touring circuits. He was the Winston Cup Rookie of the Year back in '89 at the ripe young age of 48. Some of you will remember that NASCAR allowed him to smoke cigarettes from his stock car during caution laps and, accordingly, Trickle modified his helmet and installed a cigarette lighter in his sled for that purpose. ESPN famously caught him taking drags at Dega back in the early '90's.

In one final note, I finally got a dog, urrrrrr, the wife rescued a dog for us. After playing with the dog it was apparent that he was cool as a cucumber and could probably hit a golf ball 300+. Since the names Danny and Dale are reserved for my children, the naming choice was easy...Fred. Fred is as smooth as his namesake, Freddy Couples, and an overall general badass. So far, Fred enjoys watching golf, eating, and just being chill. We'll see if Fred can finally convince me to keep my head down, eyes on the golf ball, and swing easy. 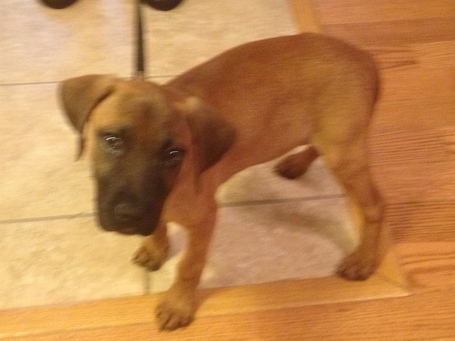