Inside the Clemson Offense: The Hook and Lateral

While the real name is "Hook and Lateral," many folks commonly refer to this play as the old "Hook and Ladder." This "trick" play is a fan favorite and is used at all levels of football. Little kids use it, high school teams use it, college and pro teams use it--heck we used it quite a bit in intramural flag football. Needless to say, someone will dust this one off during the season and everyone watching will go nuts.

Share All sharing options for: Inside the Clemson Offense: The Hook and Lateral

As with all "non-standard" plays, the playcaller will want to be careful regarding the timing of this play call. Clemson used it at a critical juncture in the Peach Bowl last season. Today we'll examine the play and the situation surrounding this play call against Louisiana State.

First the play: Clemson's receivers line up in their standard spread doubles formation locations with the QB taking a direct snap from the Pistol and the running back lined up directly behind the quarterback. The backside slot receiver runs off his defender and backside split end runs a little drag route--though cautious not to get too far across the formation as this could inadvertently bring a defender into the play. Playside, the inside receiver runs what looks like a corner or flag route. This isn't a route so much as it sets up the open field block the receiver will throw. Because of this, the aiming point for the receiver is the cornerback as this is who the receiver will stalk block--similar to a WR screen. The outside receiver runs a hook or comeback route. Variations of this play have the receiver's route anywhere between 0 and 25 yards down the field. Against LSU, Adam Humphries was lined up off the LOS and he ran his route to the LOS. You'll probably recall the famous end of half play the Dolphins ran in the '81 AFC Championship game. The hook route in that play was considerably deeper down the field and the back ran a different route but the concept is the same. Similarly, teams will use a wing or receiver instead of a back to be the recipient of the lateral.

The pass is thrown to the hook route. The runningback flairs out and gets upfield while being sure pass approximately three yards away from the hooking receiver and at full speed when he gets to the receiver. The receiver must make the grab properly (i.e., catch the ball with his hands, not his body) and quickly pitch the ball to the back with a downfield stalk block by the other playside receiver. Here is how the play looks on paper (top image only shows routes and blocking, the bottom item's dashed lines indicate a forward pass and lateral): 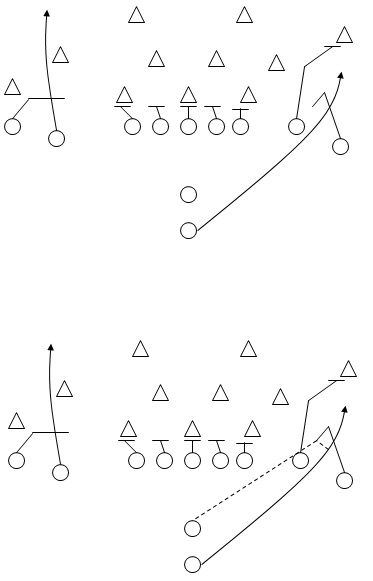 While this play is relatively simple and used everywhere, there is risk involved and precision is needed to successfully run this one. First and foremost, this play must be repeatedly practiced as it requires a lot of accurate timing. As with all passing plays, the receiver must run a good route and the pass must be on the money. The runningback has to time his route so that he is (A) near the receiver just after the ball is caught and (B) he is hitting full speed when he gets to the receiver. Once the ball is caught, it is lateraled to the back. This is the most dangerous part of the play as the lateral is a live ball and mishandling could result in a fumble and potentially a turnover.

Clemson was down eight late in the fourth quarter when this play was utilized. The Clemson Tigers benefited from John Chavis getting aggressive with his "mustang" personnel--bringing two linebackers plus a defensive back in addition to his three down linemen. This left a corner who was being stalk blocked and two safeties to make the play. Jaron Brown did a nice job perimeter blocking and Clemson was able to get 20 yards before Andre Ellington was tackled by the safety. Clemson intentionally ran this play to the side of the field featuring the outside defender playing much deeper downfield.

Here is how it went down on New Year's Eve:

Here is a variation run by Utah in the Fiesta Bowl a couple years ago. Notice a receiver is motioned into the backfield and comes all the way across the field to receive the pitch.

Michigan State ran another variation of this one, utilizing a backside receiver to take the lateral.