I love smoking meats, I just don't get enough time to experiment as much as I'd like. Smoking isn't a user intensive process but you do need to be around to tend to the fire or the meat every couple hours at a minimum. For most pork, I smoke with hickory wood. In my time down in Louisiana, they used more Pecan wood, which is similar in flavor to hickory with a very subtle sweetness difference.

This recipe is based on one I took to experiment with a few weeks ago, from Big Bob Gibson's BBQ Book. Its not exactly a tailgate recipe unless you're one of those guys who carries the smoker along on the trip, but one that can be done the day before and shredded/pulled/chopped up and carried along to feed 10 people.

Mop, made 24 hours ahead of time and sealed in a jar

6.5 cups vinegar - you may use apple cider vinegar if you wish

The combined acidity of the vinegar and juice helps break down the meat.

At least 30 minutes before starting up the smoker, soak the hickory chips/chunks in water.

Start up the smoker and set it to roughly 225 F, or build a fire and let it smolder down to at least 250 before putting the meat in.

Step 1 - Mix all rub ingredients together completely, break up the chunks of brown sugar and try to get an even mix. Remember pork usually handles a sizable amount of sugar so you can go upwards from here without it getting too sweet, but don't cut it down much or you won't get much bark. It is the caramelization of sugars that gives you the great bark.

Also mix up your injection until you've completely dissolved the sugar and salt, doing it in a small saucepan and heating it slightly on Low is ok to help that, just don't cook it.

Step 2 - Pork shoulders have a half-inch or so thick fat cap. You can put the shoulder in the smoker fat side up or down, I've had good results with either way of doing it. However in general you want the fat side up so the juices baste the meat while cooking. Whichever way you want to set this in your smoker, set it that way and begin injecting the liquid into the meat all the way to the bone. I went at 1-inch intervals, at varying depths near halfway through. Its going to be messy and squirt out, but inject every drop into that meat.

You can get a good injector at walmart, you don't need an uberexpensive metal one. 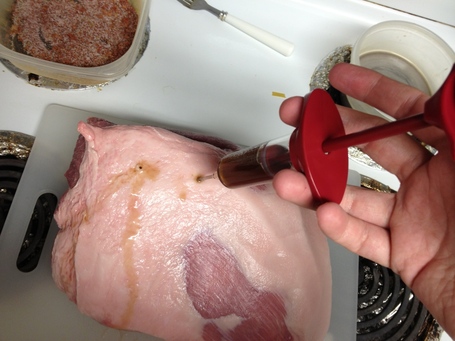 Step 3 - Apply the rub liberally all over the meat, but don't bother applying very much to the fat cap side. 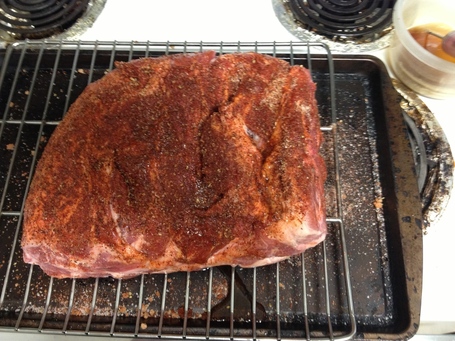 Step 4 - Set it in the smoker and do nothing to it at all. The only thing you need to do is add wood chips in roughly 2 hour intervals as they burn up.

Step 5 - How long it cooks depends on its weight. Speculate on a time of 1-1.5 hrs per pound at 225. From that, work backwards 2.5-3 hours. For those last 3 hours, apply the Mop once per hour until its finished.

Step 6 - The meat is technically "done" to eat at 160F internal, but pulled pork is done at 190 F. If you pull it out at 185 you'll be ok, but pulling it at 160 will not be tender enough to make pulled pork. Let the meat rest 30 minutes before you cut into it, the temperature will rise another 5-10 degrees as you let it rest.

Remove the fat cap and discard it, then pull the bone out, it should pull right out. Then you can pull it apart with two forks or chop it up, applying some more of the mopping sauce at the end. 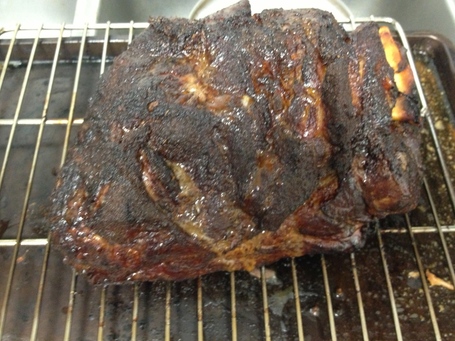