I'll start this off by saying that the weekend has, to this point, been jam up. Weather was nice, I got a lot of things done around the house, and will likely hit the links this afternoon. I think the longer days and badass weather just lifts the spirits. I'll also go ahead and ask this one to our readers...I have a rough little stretch coming up at work and am contemplating a vacation for myself and the wife following the excitement. I need suggestions, as mine include Vegas and New Orleans. Both are solid choices. Both allow you to act a fool and gamble. However, it seems short-sided not to go ahead and ask for suggestions. Personally, I'd be happy taking a week off and playing golf and maybe filling up one of those kid pools in the back yard for the wife...but I don't think that will be acceptable!

I repeatedly get asked (or ask) the question, "If you had entrance music, what would it be?". Twitter friend @MisterMcDaniel went after it with the old Vinny Mac classic "No Chance". I followed with indecision. I would obviously want to perform my own intro (aka HBK rocking out) but outside of that, I am not sure. First choice would be the Midnight Express Intro. Laid back and bad ass, two things I like. The over the top choice was DDP's intro. While I really hate don't like DDP, his intro music was good. If I can't stomach DDP, Road Warriors intro circa 1986 was bad ass and would definitely suffice. I will say that I think Rick Rude's intros are very underrated. He is no Val Venis, and definitely no HBK or slick Ric, but the intro is fucking hilarious.

I've jabbered enough about non-sports topics though I would like to discuss the stock market...maybe next week.

The basketball season for our Tigers has mercifully come to an end. I'll point out the obvious...this season has been frustrating for the coaches, players, and fans. This team, like most of those that preceded it, was pitiful converting free throws--particularly when it counted. This was evident against FSU Thursday night and this flaw reared its ugly head all season long.In addition to the stupidity at the line, Clemson blew plenty of other opportunities to pull away from the 'Noles early and were on the other end of the stick throughout the second half. Long and short, Clemson had every opportunity to win Thursday and simply could not get the job done.

Clemson loses Booker and Jennings next season. Looking back, I'll admit that I don't think that either lived up to the hype associated to come to Clemson. Maybe the hype was just too much entering school, maybe I just had too high of expectations, or maybe it was just a combination of both...In retrospect, I think all of us were riding high on the improvement we saw from Purnell/company and saw the '09 recruiting class as the one that should take us to the next level. In reality, that group fizzled. Noel Johnson and Donte Hill both transferred. Jennings' play has been criticized everywhere...so I won't pile on here. Devin Booker had big shoes to fill following his brother and was solid but couldn't climb the extremely high pedestal we all built for him prior to enrollment.

I don't want to be totally negative here. Clemson has some talent coming back...the most obvious is K.J. McDaniels. That guy is a stud athlete and, with some work this offseason, he can become one of the better players in the league. He can jump out of the gym and is obviously has some Superman qualities that make him a human highlight film. gmen has been foreshadowing next season here and I'll defer to him for the expert commentary. What I will say is that Clemson can show improvement next season. What I'll also repeat is my statement from last week: Brad Brownell will get another year to prove himself. We/I am not going lightly on the man. I just understand the facts...Clemson's basketball facilities are lacking. Clemson lacks basketball tradition. It is difficult to recruit because of these items. The next line I believe you are tired of hearing, but I'll repeat it anyway: Brad Brownell is a good technical coach. I'll also repeat a line we've said here at STS since BB was hired: he'll sink or swim based upon how well he recruits. The combination of all the above keeps me patient...we still demand improvement but want to be realistic.

Baseball vs Virginia Friday night was extremely frustrating. Clemson was finally able to provide legit run support against left handed pitching only to be compromised late by a poor effort from the bullpen. Clemson has faltered mightily against UVa lately and this letdown was just the latest in this struggle. You cannot deny that the Wahoos have assembled a quality program--particularly when you consider the pitching they've assembled in recent years. Still, if we want to be considered a top tier baseball team, we have to convert big leads against good baseball teams. Especially when we give the pitchers solid run support. The win yesterday was very encouraging as Clemson was able to hold on and get it together when it mattered. Winning this series would be nice and a confidence builder for this young team as we head deeper into conference play.

The Neckcar boys are in Bristol this weekend. While the day race pales compared to its sibling nighttime event, it is always exciting to see the circuit head to Tennessee. Like I told someone the other night, my driver is dead but I still watch the sport. We'll see if Jr. can keep his momentum up. Hopefully we see people getting fired up at Bristol.

To point, one of my buddies from grad school had sponsorship of a car out there...considering it is Bristol he is lucky that the car is still in one piece. 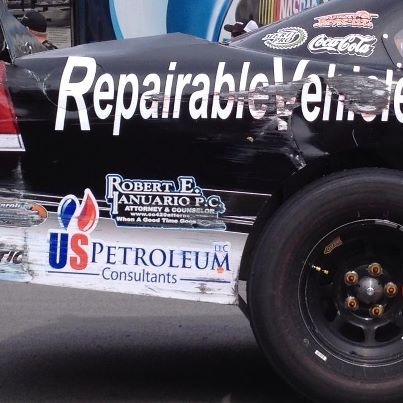 Final bit is always about golf. The Pros are in Tampa this weekend. My main man JD blew up with a 10 earlier in the week, which really pisses me off. Yes, I am an unapologetic John Daly fan. Though I am not a fan of this:

I am always pulling for JD. I am driving the Fred Couples bandwagon. Boom Boom is jam up.