March is supposed to be a glorious time. Warm weather, birds chirping, and March Madness. But with the ACC Tournament just a daya away, the excitement seems to be missing. With Clemson being losers of 9 of their last 10, this tournament has a dreary I-just-want-this-season-to-be-over feeling to it. Obviously it'd be nice if Clemson could spring an upset or two and provide some excitement to a fanbase that could really use a charge, but this team hasn't shown signs of being capable of such heroics. For that reason, we'll preview the ACC Tournament as a whole, rather than just from a Clemson perspective. 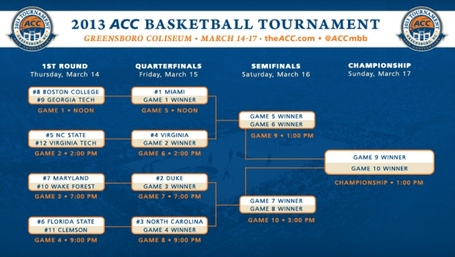 This is a rematch of the regular season finale for both teams. Both teams are young and have been playing much better in the last month of the season. Georgia Tech finished 2-2 in their last 4, with victories over UMD and on the road at Miami. Boston College has won 3 straight, with victories over UVA, Clemson, and GT. I don't hate GT basketball with the same venom that I hate GT football, but there is still enough dislike to go around. I'll pull for BC in this one and believe they'll get the victory.

NC State blew a chance at the #4 seed and a 1st round bye in losing to FSU in their finale. NC State is still on the right side of the bubble, but they might want to go ahead an win this one so that things don't get interesting on Selection Sunday. I'll be pulling for NC State because an NC State/Virginia matchup in the quarterfinals is a lot sexier than VT/UVA III.

It'll be interesting to see the psyche of Maryland after blowing a huge lead on Sunday at UVA. This has been a disappointing season for UMD and their fans. On the flip side, Wake was much more competitive this season than I expected. I anticipate they'll have more motivation in this game. However, I think talent wins out in the end and UMD has more of it.

Clemson played FSU very close both games this year. They should've won the 2nd meeting in Tallahassee, but blew a double digit lead and failed to execute down the stretch. However, FSU comes into this matchup fresh off of back-to-back wins over UVA and NC State. Their confidence is rising while Clemson's is at an all time low. Advantage FSU.

If these games play out the way I'm expecting, the quarterfinal matchups get intriguing.

This is the most blah matchup of the bunch. BC played Miami close earlier, but I expect Miami to roll here

This game has tournament implications for UVA. Right now Lunardi has them as a 12 seed and in a play-in game. Losing to NC State will put them in serious danger of missing the NCAAT. Beating NC State for the 2nd time this season can help Hoos' fans breathe a little easier on Selection Sunday. UVA barely beat NC State at home earlier this year, and that was with Lorenzo Brown leaving the game in the first half with an injury. I think the Hoos will be sweating on Sunday.

Duke seems to be the game that Maryland circles on their calendar each year. They hate each other. I don't think Maryland can beat Duke on a neutral court, but Maryland will compete their tails off in this one.

UNC blew out FSU in both of their regular season matchups. Logic would suggest that their is no reason to expect anything different, but the ACCT always has an upset. I'm not willing to pick it here, but I'll just say that UNC is on upset alert.

If the first two round play out like I suggest, the weekend will be very exciting.

NC State has the talent to knock off Miami, but they haven't played consistent enough defensively to get stops when they need them. Miami has been very consistent because they are one of the best defensive teams in the country.

I expected a lot more out of UNC last Saturday night. Duke hit them with a haymaker to start and they never got their legs back under them. Duke has too much offensive versatility and too many weapons for UNC to keep up with.

We'd should only be so lucky if we get to see this rematch. Miami dominated Duke in their first matchup, but Duke battled back to win a great game in their 2nd contest behind Ryan Kelly's heroics. It's tough to pick against Duke in the ACCT. But Miami is a tough matchup for Duke because they have quick, strong guards that are tough to keep out of the lane. Duke loves applying ball pressure, but Cook can't stay in front of Larkin and Curry can't stay in front of Durand Scott. I think Miami cuts down the nets.