Inside the Clemson Offense: The Criss-Cross Counter

Share All sharing options for: Inside the Clemson Offense: The Criss-Cross Counter

The Chad continued to install more pieces into the Clemson offense this past season, and one of those pieces was one of my favorite wing-t plays, the old "Criss Cross Counter." This play is slicker than owl shit and one that I was surprised wasn't used against South Carolina and their aggressive defensive line.

This is a play most college football fans would describe as an inside counter reverse. Clemson uses a fairly unique set that, I assume, was designed to better mirror the wing-t's three back looks with Clemson's standard 21 personnel. Here is the original play from the wing-t::

With Clemson's direct snap formation, we start with an "upback" and receiver who is 3-5 yards behind the LOS and just outside the tackle on the upback side. Clemson then motions the flanker into the backfield to essentially create a three back formation. At the snap of the ball, this motioned receiver moves laterally across the formation under the QB to receive a handoff. He then hands off to another back who is coming across the formation in the other direction. Clemson uses their third back as a lead blocker and pull the backside guard as well. Here is how it looks on paper: 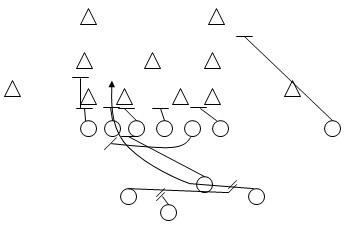 This is how Clemson's Criss Cross Counter looked against Maryland.

As you likely know, counters and misdirection are excellent tools to use against an aggressive defensive front. This play in particular adds a little razzle-dazzle with multiple handoffs and backs moving in multiple directions. Again, though, like most of The Chad's offense, this play comes directly from concepts and strategies used in previous offensive attacks--most notably the Deleware Wing-T.