Clemson travels to Columbia this weekend to face off with in-state rival South Carolina. Today we'll compare depth charts to see how each team compares on recruited talent per the "experts."

As predicted, South Carolina is the third most talented team Clemson will face...behind the opening week (and relatively injury-free) Georgia team and the loaded Florida State Seminoles. Carolina and Clemson match up closely per the "recruiting gurus." Offensively, they look to be nearly a wash. I'll point out that SCar's Bruce Ellington was given lower/no ratings because he thought he would only play basketball in college. Defensively, the Tigers sport just over a 0.2 stars per player advantage over the Gamecocks. This gives Clemson what appears to be an overall advantage based on the metrics of this analysis. 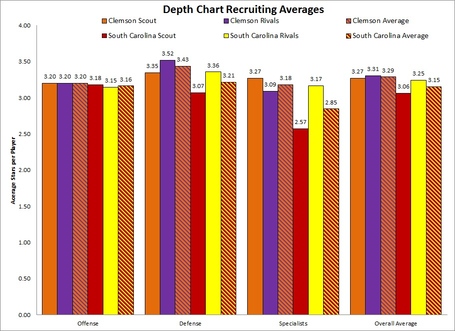