We've been fretting over offensive line play here at STS for what seems like forever. Unfortunately, this season has been more of the same. Today we want to look at participation numbers to assess who has played both individually and via experience level.

As usual, I'll begin by pointing you to the source data. The Clemson University AD assembles the game data and the coaches provide the participation numbers for this report. The information discussed below can be found on the Clemson Athletics website, www.clemsontigers.com. I'll note that all data shown here only reflects actual offensive line stats. Special teams stats are not accumulated for this assessment though many of these players also have responsibilities on special teams in addition to their "regular" assignments.

As always, feel free to digest this data and provide your own opinions on what these data really mean, what you think about the current situation, and where you think this group is headed.

The chart below shows individual participation over the course of the 2013 season. 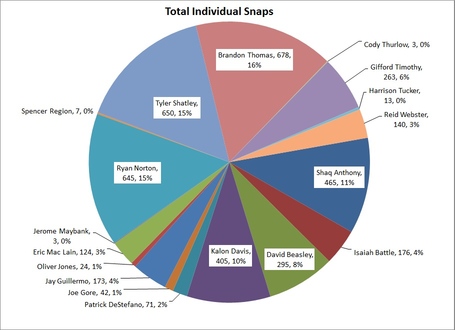 As you can see, six names stick out: Shatley, Norton, Anthony, Beasley, Davis, and Thomas. I was a bit surprised that Giff Timothy didn't score more snaps as much as I squirmed by his play at RT. Otherwise, the list shouldn't be too much of a surprise. I'll not that the players mentioned above are the lone linemen to log over 200 plays on the season. That was a bit of a surprise since we run a lot of plays and have had quite a few decisive victories on the year. 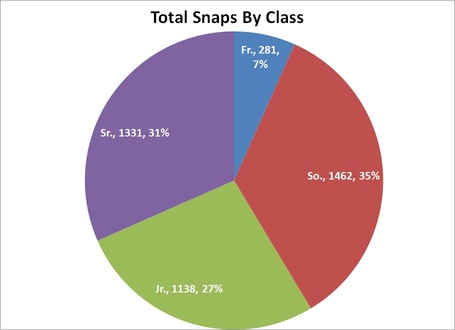 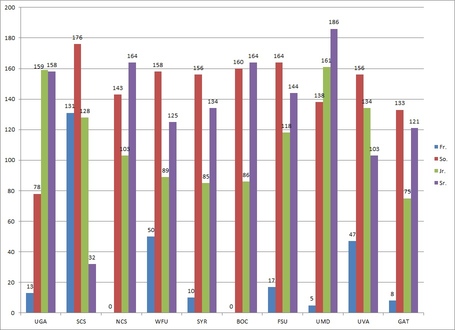 What you will notice is the seniors (Shatley at right guard and Thomas at left tackle) took just under 1/3 of the total offensive line snaps. These two were virtually the lone seniors on this squad to log snaps so they'll likely be the only players to replace next year. Juniors Beasley, Davis, Timothy, and Reid Webster logged significant snaps as juniors. Each of these players put forth 140 snaps or more through the GT game. Sophomores Shaq Anthony and Ryan Norton led the way for their class while Isaih Battle and Eric Mac Lain have 174 and 124 snaps there respectively. Jay Guillermo is really the lone freshman who has contributed on the year (173 snaps).

Clemson, like many schools, has really relied on a handful of guys to log significant snaps this season. As mentioned earlier, only two linemen will be lost going into '14 but those guys gave this unit a lot of quality snaps (nearly 1/3 of all OL snaps). Unfortunately for this unit as well, one of those guys is Brandon Thomas, an offensive tackle. As you know, we've belabored over Clemson's obvious woes at the right tackle position. If we don't have a quality body to stick on the other side, one has to wonder what this team will do having to replace a guy who has done a good job on the other side of the formation--the quarterback's blind side.