Clemson hosts Ga. Tech this week in what will be the Tigers' second Thursday Night football game of the season. Below we'll examine how the two teams match up based on their depth charts and what the "experts" thought about their players coming out of prep school.

We've all heard that Paul Johnson and his staff--for a variety of reasons including scheme--have a tough time on the recruiting trail. This is the case when you compare the Jackets to Clemson. Clemson was approximately one quarter of a star per player better on offense, nearly 0.45 stars per player better on defense, and look soundly better talent-wise when you look at the provided special teams depth chart items. This equates to a 0.37 stars per player overall average advantage for the Tigers. 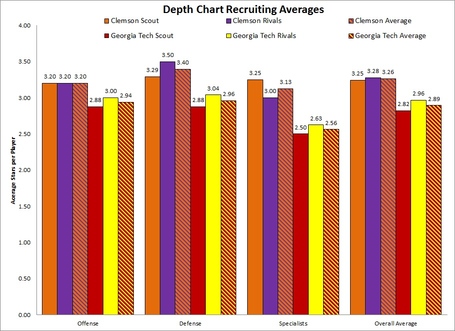