Boston College rolls into Death Valley this weekend to face our Tigers. Today we take a look at how the players were rated coming out of high school and into college based on national recruiting opinions. This type of discussion is designed to give everyone a general idea of how the overall talent compares for both sides. It is not a perfect system but it is consistent.

We'll compare Clemson/BC talent levels based on officially released two-deep depth charts. Depth charts for both teams were attained DIRECTLY from the Clemson website (www.clemsontigers.com). A pdf version of this can be found there as well. I will go ahead and tell you that because of injuries and depth chart adjustments between the release of this information and game time, some items here may be a little out of place but in an effort to maintain consistency, I'll use both teams' depth charts as presented on the official website.

What we found is what we typically find every year when we compare these two football teams. Clemson has the decided edge all around. Clemson's statistics are 0.55 stars per player better than BC on offense, over 3/4 of a star better on defense, and 2/3 of a star better on average in the special teams category. With the exception of Florida State, Georgia, and possibly Carolina, this will probably be the story all season. 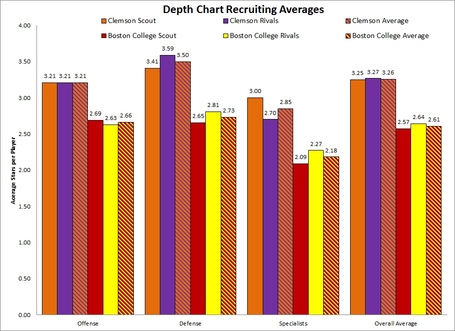