I will try and hide my general distain in the decision to bring Syracuse into the ACC and attempt to look solely at the game—as it is what it is at this point. Hopefully I am wrong in that view and we’ll all enjoy having the Orangemen in the conference. On the bright side of things, Clemson gets to travel into a new region and play in front of a new audience. This is the first time Clemson has played in the state of New York in 60 or so years. It is also the first time our Tigers have played the ‘Cuse since New Year’s Day, 1996 (man, that was a bad day). Saturday, Clemson rolls into the Carrier Dome and into what appears to be an excited crowd for Syracuse’s inaugural ACC conference football game. I believe that the ‘Cuse has also scheduled Clemson as their Homecoming game, so the target is squarely on Clemson’s chest. What will the Tigers face on the field? Let’s go ahead and get into the preview to shed light on what to expect in the Dome.

Clemson moves back onto regular television this week, playing in front of a national audience on ABC / ESPN2, depending on where you live. 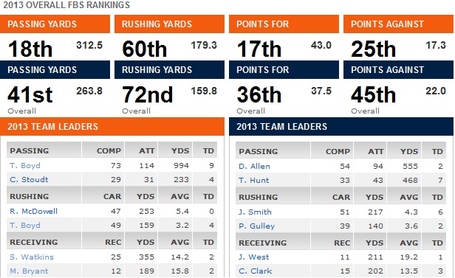 Scott Shafer is in his first season as Head Coach for the Orangemen.  Shafer has been to a lot of places since the early ‘90's including defensive coordinator spots at Northern Illinois, Western Michigan, Stanford, Michigan, and Syracuse.  Shafer was promoted from defensive coordinator to head football coach at the ‘Cuse when Doug Marrone left to become the head coach of the Buffalo Bills.  Marrone left Syracuse with an overall 25-25 record...doesn't sound impressive enough to parlay into a pro coaching job until you realize how little he had to work with when he took the job.  A lot of the credit for this improvement has to go to Scott Shafer for his work to turn a disaster of a defense into something respectable.

Shafer is known around football circles as a coach who instills an attacking philosophy in his defenses.  He is more focused on the fundamentals and attitude of his defensive players instead of core philosophy.  The thought there is that having a great scheme is nice but scheme alone will not win you football games.  Players have to want to make plays and have to be fundamentally sound enough to properly tackle and such.  Along those same lines, Shafer liked to be as dynamic as possible and not pigeonholed into one specific formation or scheme.  This strategy allows the coordinator to draw up all kinds of stuff to defeat the opposition but also requires a wide array of knowledge by coaches and players.  There is no free lunch and Shafer is willing to stress his player's knowledge for flexibility and a downhill attack based attitude.

The ‘Cuse offense is led by first year coordinator George McDonald.  McDonald spent time at Bucknell, NIU, and Stanford before landing his first offensive coordinator role with Western Michigan in the mid-2000's.  He then was an assistant at Minnesota before heading to the pro ranks with the Browns.  He then went back to the collegiate level as receivers coach at Miami then Arkansas before becoming the Syracuse offensive coordinator for this season.

Syracuse's running game features a good bit of zone read out of the Pistol/Gun sets and more conventional play from more traditional sets.  One item that will be the focus of the offensive charge for the ‘Cuse will be the play of QB Terrel Hunt.  Hunt replaced senior Drew Allen several games into the season and has provided a definitive spark for this offense.  Hunt is a mobile quarterback who doesn't have an extremely strong arm but is very capable on the short to medium range routes.  It will be imperative that Clemson contain his running ability-everyone knows that Clemson has struggled against quarterbacks who can use their legs to pick up key firs downs to keep the sticks moving.  There are a lot of questions surrounding the Orangeman offensive line.  This group will easily see its biggest test to date against the Clemson defensive line.  The OL is fairly young and has but one senior (center Macky MacPherson) on the starting unit.  This is definitely an area that Clemson defense should have a clear advantage.

Syracuse has two very capable running backs.  Jerome Smith and Prince-Tyson Gulley have a combined 90 carries for 357 yards and 8 touchdowns.  Smith is the clear leader between the two with 51 carries and 6 of the 8 touchdowns.  Many thought that that this group would get off to a much faster start.  However, their efforts were thwarted early because of poor offensive line play and situational football (Syracuse was placed in many passing situations in their first two contests) though I should note that they did combine for 100 yards on nearly 30 carries against Penn State.  McDonald will definitely want to get these guys going early to allow play action to take hold with his younger quarterback, particularly when you assume that Clemson's defensive line should be better than the ‘Cuse OL.

Chuck Bullough leads this Syracuse defense.  If that name sounds familiar, it is because Bullough played college ball at Michigan State then spent a couple years in the league with the Eagles and Dolphins.  Following his playing days, he joined the Michigan State staff then went back to the League as a coach with the Bears before going to Western Michigan and eventually UCLA.  At UCLA, he was promoted to defensive coordinator under Rick Neuheisel.  Bullough then spent a couple seasons with the Cleveland Browns before returning to the college ranks as ‘Cuse's defensive coordinator this season.

We discussed earlier head coach Scott Shafer's aggressive attitude as a defensive coach.  This attitude carried over even after he moved up the coaching ladder.  The Orangemen would love nothing more than to blitz and will blitz often.  Clearly, this puts pressure on the ‘Cuse secondary that has been willing to show M2M coverage behind this aggressive front.  I will say that the secondary has turned out to be worse than most everyone expected and can be exploited-particularly by the talent we have at the wide receiver position.  Compared to last season, they have toned down the C1 and moved into more of your standard zone looks.

Clemson should have a lot of opportunities to pressure the Syracuse secondary with some very talented wide receivers.  Guys like Sammy Watkins and Martavis Bryant should be excited for these types of looks and the guys lining up across from them.  If you can get the ball in Sammy's hands, watch out because it will be big trouble for the opposition.  The real question for the Clemson offense is keeping the defenders at bay so that Tajh has enough time to stay in the pocket and deliver the football down the field.  We've had some issues at the tackle spot.  The worst thing that could happen is the pocket collapses and Boyd gets jittery in the backfield-pulling the ball to run prematurely and/or stepping into rushing defenders for a tackle for loss.  Here we will also be watching the backs as they will need to do a good job picking up the blitz by either staying in-formation to block or chipping the defender on the way out of the backfield.

This will be Clemson's first trip up to the Carrier Dome.  From what I understand, that place has gotten rowdy in the past and the ‘Cuse expects some of that craziness on Saturday.  This weekend marks the first ACC game for the new member and has been designated as Homecoming.  The combination of these two and a top 5 ranked Clemson team rolling into town assures the energy level will be high to begin the game and that there will be a pretty good crowd at the Dome for this one.

The Syracuse faithful have jumped on the Terrel Hunt bandwagon.  After seeing little playing time in the first two football games (losses to Penn State and Northwestern), Hunt helped lead the Orangemen to big wins over Wagener and Tulane.  I won't say that I am sold after playing against such poor competition but will say that he appears to be an upgrade over Drew Allen-who was very unimpressive the footage and stats I've seen.  Clemson will need to show that it can contain Hunt and not let him methodically move the football down the field.

Offensively, if Clemson protects Tajh Boyd the Tigers may set stadium records.  Syracuse has a pretty good linebacker corps but their secondary is, well, lacking.  Get guys like Watkins, Bryant, and hopefully some of the young bucks into space and it could get ugly.  I think we'd all like to see Clemson focus more on running someone not named "Tajh Boyd."  We've been screaming about this for a while and would really like to see the running backs take the beating rather than our starting quarterback.

Overall, I am not sold that the 50,000 seat Carrier Dome is as intimidating as claimed.  Clemson has played in hostile, loud, hot environments before so I cannot jump on that train.  Syracuse is simply not a good football team.  Clemson should come out and win comfortably but you never take these items for granted, especially when you expect the ‘Cuse will come out fired up.  Hopefully I'll be singing that tune Sunday morning as the Tigers look forward to a BC/FSU/UMd stretch in their quest for an ACC crown.